Blizzard batters New Brunswick, brings most travel to a standstill

Strong winds are keeping conditions poor in New Brunswick Tuesday evening as crews clean up from the day’s blizzard. 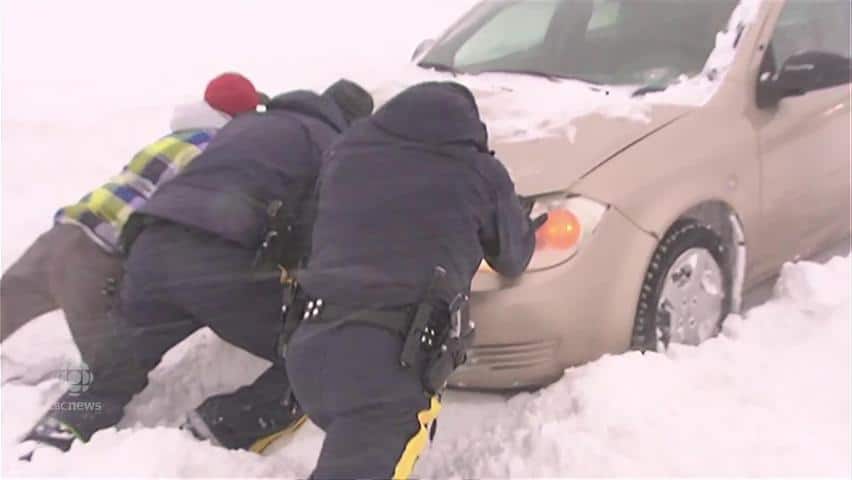 Strong winds are keeping conditions poor in New Brunswick Tuesday evening as crews clean up from the day’s blizzard.

Police asked drivers to continue to use caution, as the winds and slippery mean roads remain dangerous.

A bright light in the storm was NB Power reported only 185 customers were without power across the province at 9 p.m., down from a peak of 1,800 customers.

"The snow will let up later Wednesday evening in New Brunswick and Prince Edward Island, having let up with the changeover to some freezing rain and showers later [Tuesday] afternoon in Nova Scotia."

Tuesday night in northern New Brunswick, residents can expect wind and periods of snow, heavy at times, and blowing snow bringing 5 to 10 centimetres before it begins to let up after midnight.

Wednesday in northern New Brunswick will be windy with another 2 to 5 centimetres of snow and local blowing snow.

Tuesday night will be windy with a further 5 to 10 centimetres of snow and blowing snow.

Wednesday in Fredericton the snow will taper to flurries by afternoon and winds will begin to diminish near noon with an afternoon high of -6 C.

For southern New Brunswick, snow and wind continues Tuesday night with another 5 to 10 centimetres expected along with winds from the northeast at 50 kilometres per hour gusting to 90.

Wednesday will be windy with another 2 to 5 centimetres of snow.

After the storm moves out on Wednesday, Coade says a ridge of high pressure will move across the Maritimes on Thursday returning the sunshine.

Motorists throughout the southern half of New Brunswick are being told by police and the provincial Emergency Measures Organization to stay off roads and highways as a blizzard continues to batter the province.

Some regions, such as Moncton and Oromocto, had already received more than 25 cm of snow by mid-afternoon Tuesday.

The severe storm is slowly moving east, with snowfall expected to decrease into the night, but winds will remain strong throughout the province, with gusts in the range of 90 km/h, according to Environment Canada.

​All main roads across the province are snow-covered and visibility is poor, EMO said in a statement.

The Trans-Canada Highway from Moncton to the Nova Scotia border was closed Tuesday due to blowing snow and poor visibility. It reopened shortly before 4:30 p.m.

Highway 11 between Shediac and Kouchibouguac was also closed, but reopened by about 5 p.m.

RCMP advised that no travel is recommended on the Trans-Canada Highway between Fredericton and Moncton due to white-out conditions. Route 126 between Moncton and Rogersville is now open, but travel is not recommended due to poor visibility.

Warnings have also been issued for Route 7 between Fredericton and Saint John, Route 1 between St. Stephen and Sussex, as well as Routes 8, 11, 15, and 16, due to poor visibility caused by high winds and blowing snow.

Saint John, Moncton and Fredericton all pulled their municipal transit buses off the streets at mid-morning.

The Confederation Bridge has restricted certain classes of vehicles from crossing until the conditions improve. The restricted vehicles include automobiles towing trailers, motorcycles and high-sided vehicles, such as trucks, tractor trailers, recreational vehicles and buses.

Ferry services for Grand Manan, between Saint John and Digby, Gagetown, Belleisle Bay, between Earle Wharf and Long Point, and Westfield, between Westfield and Hardings Point, will be out of service until further notice, due to the weather conditions, the Department of Transportation advised. The Evandale ferry was shut down at 5:30 p.m., until further notice, officials said.

Saint John police and RCMP have advised people that because of the storm and road conditions, they will only be responding to emergency calls, until further notice.

Environment Canada has also issued a special weather statement warning of higher than normal water levels Tuesday afternoon and into the evening from Kouchibouguac southward to Cape Tormentine as strong winds push the ice onshore.