A rove beetle discovered in New Brunswick has been named Apimela canadensis in celebration of Canada’s 150th anniversary, although the insect itself was found nine years ago.

If you're not careful, you might miss New Brunswick's newest species.

The newly named beetle was found near the Meduxnekeag River west of Woodstock in 2008, said Dr. Reginald Webster, a research scientist in Fredericton.

The beetle, which is only about two to four millimetres long, was also found in the Jacquet River Gorge in northern New Brunswick.

"It's exciting to find a species that nobody knew existed," said  Webster. "We knew back then it was something different." 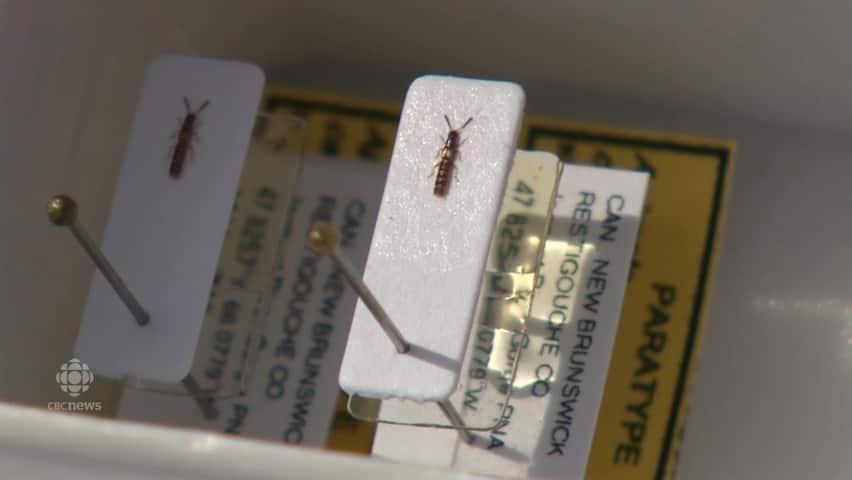 'It means from Canada'

4 years agoVideo
0:35
A newly discovered species of beetle in New Brunswick has been named in honour of Canada's 150th anniversary. 0:35

In honour of his discovery and in celebration of Canada's 150th birthday, the scientist has named the bug Apimela canadensis.

Apimela is the genus name and canadensis means, "from Canada," he said.

Webster has named other beetles he's discovered after his son and other New Brunswickers.

Right now his beetle is only known in New Brunswick.

Researchers are hopeful a new species will pop up in every province before the end of the year.

"We were sort of hoping we could find other species new to science from other provinces," said Webster, who researches bugs across the province. "We could have one from every province that's named canadensis."

He discovered Apimela canadensis along the Meduxnekeag River west of Woodstock, where he was searching through gravel. He then took the bug back to his lab and observed it over the winter.

He said this is one of 54 new species from New Brunswick over the past 10 years.

"We haven't spent a lot of time looking into these kinds of habitats to see what we really have," he said.

The beetle will be included in an upcoming book by Natural Resources Canada's Canadian Forest Service, featuring more than 400 Aleocharinae beetle species found in eastern Canada.

Webster is hopeful researchers will find out more about the new bug over time.

"With small beetles like this, we know very little about what they do," he said.