Arnold Hawkins remembers when the dirt roads in Beaver Harbour were paved over.

Arnold Hawkins just turned 108, but he feels like a much, much younger man — maybe even a newborn.

He's lived in the small fishing village of Beaver Harbour his whole life, working as a fisherman for more than 40 years.

His family and friends celebrated his birthday with lunch and cake.

Violet says even at his age, he's still trying to take care of everyone.

"Just a couple of years ago we were just laying out on the bed, him and I talking, and I had kinda dozed off and I felt him moving around, all down the side of me, and I thought, 'What is he doing?' ... I peeked out and he sat up and he had completely tucked me in from the top to the bottom," Violet said.

"He was still looking after his little girl after all these years, and that just melted my heart." 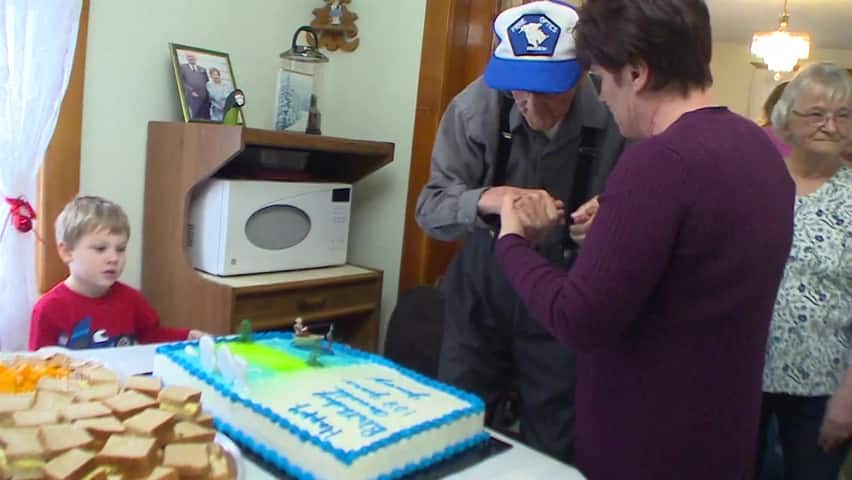 And even at his age, Hawkins still has his sense of humour. When Violet asked him how old he was, he replied, "31."

"You're looking a little bit wrinkly for 31," she said.

His granddaughter Cheryl remembers how her grandfather used to take care of her while her parents were both working, and how he did the same thing for her children.

"When I had my first child, he was in his early nineties, and he would actually babysit for me," she said. "He would actually change diapers at 90-some years of age, and watching him take care of my child the way he took care of me … that's just something I talk about all of the time."

She said she asked him once what his strongest memory in Beaver Harbour was and he told her he remembered when the dirt roads were paved over.

Kassidi Whittier, Hawkins' great-granddaughter, said seeing her great-grandfather's love for his community makes her want to stay there too, so she can be "old like that."

"He built this house by himself, I think that's pretty amazing," she said. "He did everything he could to make his life great and he did and he made everyone else's life great around him."

With files from Graham Thompson