Bathurst Coun. Richard Barbreau is collecting Costco membership fees up front in hopes of luring the retail giant to the city, but not everyone is sold on the idea. 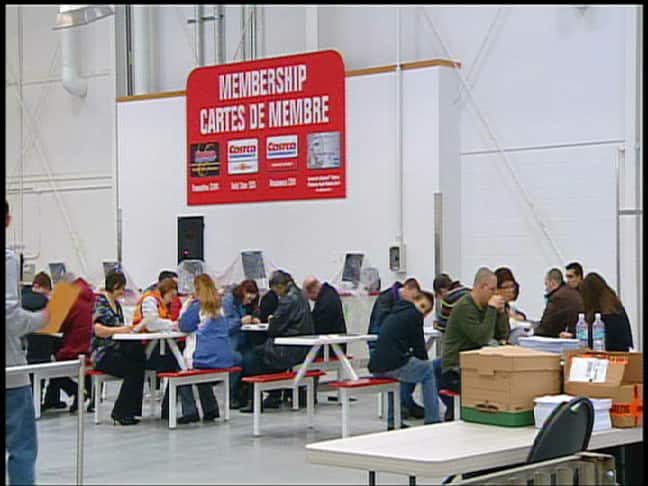 6 years ago
2:17
Bathurst Coun. Richard Barbreau is collecting Costco membership fees up front in hopes of luring the retail giant to the city, but not everyone is sold on the idea 2:17

A newly-elected city councillor in Bathurst is collecting Costco membership fees up front in hopes of luring the retail giant to the city.

Richard Barbeau, who was elected in May's byelection, said landing a Costco store would bring jobs and visitors to the northern city.

Normally, Costco won't even consider a new location with a population of less than 250,000 and Bathurst's population currently stands at about 15,000.

But Barbeau contends the borders aren't that clear cut.

Residents from across the Chaleur region have already started dropping off $55-cheques at Bathurst City Hall as Costco membership downpayments.

Barbeau said the money will be held in a bank account for two years while he tries to entice Costco to set up shop.

If his bid is unsuccessful, the citizens will get their money back, he said.

Barbeau has not actually spoken to Costco officials yet, but says he plans to attend a trade show in Toronto this fall and will try to meet with company representatives at that time.

He already has a location in mind for the store — on St. Anne Street, where it would be close to other large retailers and visible from the highway.

But Jennifer Arsenau, who owns the nearby Theriault's Grocery store, said she is not sold on the idea.

Many small, local businesses are already struggling to stay afloat in the face of competition from Wal-Mart and high unemployment rates, she said.

Not "really thinking about the aftermath of what a Costco could do to our small community is really a sin. It's a shame," she said.

"Everyone's working pay cheque to pay cheque right now. So there's only so much money that goes around in our community."

A Costco spokesperson told CBC News on Friday the company's policy is not to discuss possible store locations.