A long-time educator in Saint John says a growing burden of bureaucratic demands is increasingly robbing teachers of time with students — both inside and outside the classroom. 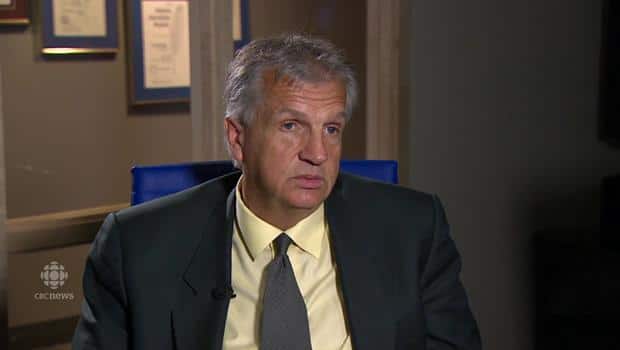 6 years agoVideo
1:52
A long-time Saint John teacher says a bloated and growing bureaucracy is sucking education dollars away from kids in the classroom. 1:52

A long-time educator in Saint John says a growing burden of bureaucratic demands is increasingly robbing teachers of time with students — both inside and outside the classroom.

And it's the students who pay the price, says Saint John High School teacher Barry Ogden.

Ogden, who retired this month after 33 years on the job, says he's speaking out now because he no longer feels muzzled.

He contends teachers today are being pulled out of the classroom to attend meetings far too often, leaving their students with supply teachers.

"It's the classroom teacher, and the educational assistant, the EA, [who] are the most important people in the system because they deal with the children," said Ogden.

But "the system has been turned on its head by saying that the most important thing in the system is the bureaucracy," he said.

Instead, "we're just being bombarded with meetings, emails and paperwork."

Ogden spent decades coaching multiple sports, including football, soccer and hockey. He was also active in the community, raising tens of thousands of dollars for food banks, and supporting urban beautification projects, such as Marigolds on Main Street.

Years ago, all teachers did, he said.

But in today's environment, Ogden says teachers are not rewarded for doing extracurricular activities with their students.

Teachers who toe the line are more likely to see promotions than teachers who are good with the students, he said.

Ogden believes teachers and schools could also do more to help priority neighbourhoods — if they were empowered to make local decisions.

"We have the highest poverty rate. We have the oldest schools. We have huge obesity rates," said Ogden. "We don't have fields in uptown Saint John. We don't have what everybody else has. And that's all Fredericton-based decision making."

The president of the New Brunswick Teachers' Association, Peter Fullerton, agrees there are more demands on teachers for tasks, such as paperwork.

"That comes along with requesting more and more accountability all the time," he said.

But he contends much of it is being done after hours and doesn't affect students.

"I honestly don't believe it's taking away from classroom time, or time on task, as we call it," said Fullerton.

"It's really taking time from the [teacher's] home life, the time with their own family, which I believe has a detrimental effect."

Fullerton is however, worried about the impact of pending education cuts.

"I don't know how teachers are going to be able to continue to meet the needs of students," he said.

The Gallant government is cutting $25 million from the system, starting in September, including 249 positions — most of them short-term contracts, said Fullerton.

"Some of those young, vibrant teachers are not going to have positions to return to next year."

"We know there has to be large number of closures of schools or large reduction in the staff load."

Anglophone School District - South Superintendant Zoe Watson says administrators are doing what they can to reduce the time demands on teachers.

She says the system is making better use of technology to make meetings more time-efficient.

"We do meetings via conference calls and on the computer so people are not pulled away," she said in an emailed statement, while travelling out of province.

"For example, we only meet face-to-face with principals about four times annually, and twice with our vice-principals,  and they give two summer days for meetings and start-up," she said.

"We do have teachers who participate on district committees, provincially and at the district level. Teachers may be asked to be part of curriculum development committees provincially, but it is their choice to be involved," said Watson.

"‎These are great experiences for teachers. The NBTA has provincial committees and teachers may opt to be involved."