To mark the centennial of the end of the First World War, Fredericton bagpiper Peter McDougall gathered a group of volunteer pipers to play a lament at the cenotaph every day at 5 p.m. for the next 100 days.

Bagpipers will start playing at the cenotaph in Fredericton on Saturday at 5 p.m. for 100 days

The sound of bagpipes will rise from the New Brunswick Provincial Cenotaph in Fredericton for 100 days straight.

It's Fredericton bagpiper Peter McDougall's way to honour those who served in the First World War, which ended 100 years ago on Nov. 11, 1918.

To mark the centennial, McDougall decided to gather a dozen volunteer pipers to play a lament at the cenotaph every day at 5 p.m. The first bagpiper plays this upcoming Saturday.

"As veterans are dying, fewer and fewer people have a connection to military service, and it's very important to me that we remember the sacrifices of the people that have gone before us," said McDougall, who has been playing the bagpipes for seven years.

McDougall came up with the idea after discovering what others were doing to pay tribute to veterans.

A tribute to veterans

"I read an article about a group of citizens in southern Ontario — who last year — had decided to stand a 24-hour-a-day vigil for the week leading up to Remembrance Day," McDougall said.

"So somebody was at their cenotaph at all hours of the day and night for a full week."

McDougall was also inspired by the Last Post Ceremony at the Menin Gate Memorial in Ypres, Belgium, where a lament is played every evening as a tribute to those who fought in the First World War. 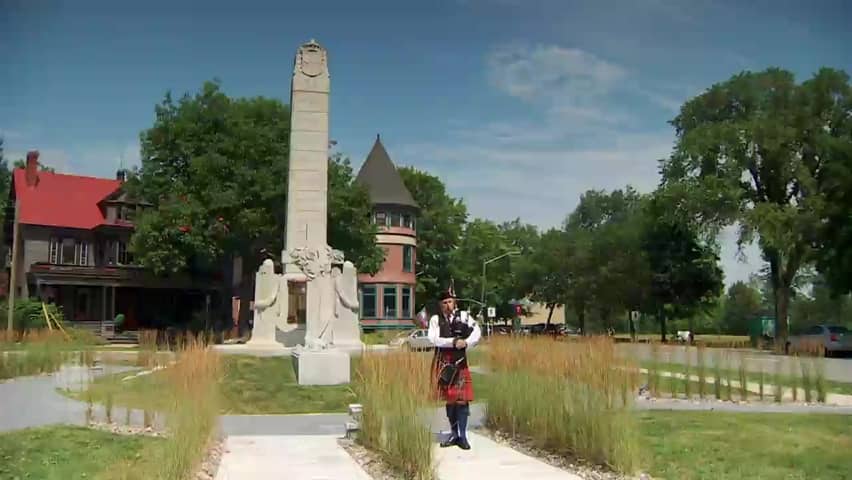 After hearing about how a Fredericton teacher and his students at George Street Middle School were researching the names on the cenotaph, McDougall also wanted to find a way to pay tribute to local veterans.

A small way to give back

"This is my small way to contribute to that remembrance effort and I'm supported in it by a great group of people, who have all stepped up readily to take on a shift over the course of the 100 days."

Every night for the next 100 days, bagpipers will take turns playing a different lament and the tune will last between two and four minutes.

"Each piper will choose a lament that means something to them," McDougall said.

"If people were to come on different evenings, they'll probably hear different laments each time they come."

McDougall said the pipers will play rain or shine leading up to Remembrance Day.

The local musician said he hopes people passing by the cenotaph will take a moment to think about those who fought in the war.

"And I hope they'll enjoy the music."

Sarah Morin is a reporter with CBC New Brunswick. She grew up in Thunder Bay and London, Ont. and moved to Fredericton for university. You can follow her on Twitter @sarrymorin or send a story tip to sarah.morin@cbc.ca.