Gallant said it's fair for his Liberal Party to target the 33 years that Higgs spent working for Irving Oil because he said that experience sheds light on the Progressive Conservative leader's philosophy.

Gallant was asked in a year-end interview with CBC News why he has been making an issue of the three decades Higgs spent working for Irving.

"The experience of somebody, certainly, can give you a sense of what they would do if ever they were premier, what they believe and why they believe it." 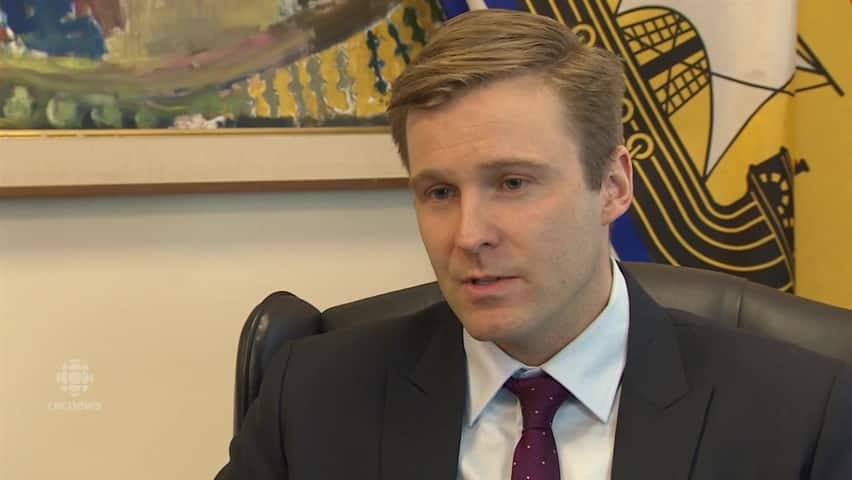 'They still made fun of my experience'

3 years agoVideo
1:46
In the 2017 year-end interview, the premier can't explain how Irving experience hurts qualifications of PC leader Blaine Higgs. 1:46Gallant didn't explain exactly how working for Irving had led Higgs to adopt the positions he has, but the Liberals have criticized the PC leader for opposing minimum-wage increases, income tax increases for the richest New Brunswickers, the new Family Day holiday and a program to make tuition free for some post-secondary students.

"He wants to help the wealthy and large corporations," Gallant said. "And he's demonstrated that in his voting record as leader of the Opposition."

Proud of his past

Higgs said he's proud of his time at Irving Oil because it taught him how to solve problems, save money and hit targets — skills he argues would help him as premier. The 63-year-old retired as a senior executive just months before running in the 2010 provincial election.

"How do you think every tennis player felt, and every tennis coach felt, when they were saying that when I was 20-something … and I was coaching tennis, that was ridiculous and that wasn't good enough experience?" - Brian Gallant

"That has been a training ground for me," Higgs said on the last sitting day of the legislature before the Christmas break. "That has given me a different insight into the possibilities in government."

The PC leader said he plans to counter the Liberal message in the coming months as he tours the province extensively and releases his campaign platform.

As part of a preview of their 2018 election campaign strategy last fall, the Liberals launched a website and social media campaign criticizing Higgs's positions and highlighting his years "working for big business."

The Liberals initially said Higgs had negotiated a controversial 2005 tax break for the Canaport LNG terminal during his time at Irving. But when Higgs said he wasn't involved, the party switched its argument, saying instead he supported the tax break.

Higgs's signature is one of four from Irving Oil executives that appeared in a 2005 company advertisement supporting the tax deal.

The PC leader has said he'd explain how the ad came about once Gallant agrees to publicly debate the issue with him.

Gallant said he isn't worried about how Irving Oil employees will react to his criticism of Higgs's tenure with the company, which is one of the largest employers in the province.

"How do you think every tennis player felt, and every tennis coach felt, when they were saying that when I was 20-something … and I was coaching tennis, that was ridiculous and that wasn't good enough experience?" Gallant said.

"If you remember, when they were in government, they did that quite a bit when we were in Opposition."

Gallant said his time as a tennis coach and running the two small businesses he launched helped pay his way through law school. But the PCs "still made fun of my experience," he said.

The 2005 tax break for Canaport LNG was repealed under Gallant's watch. But the facility also ended up benefiting from an outside consultant's report that reduced its property assessment — and its tax bill — by two-thirds.

Meanwhile, one of Gallant's own ministers, Rick Doucet, recently came to the defence of J.D. Irving Ltd., arguing passionately in the legislature it was time politicians "started to stand up for the mills in this province" during a dispute with private woodlot owners.

For his part, Higgs has told reporters his Irving career allowed him to raise a family in New Brunswick.

"I would like that opportunity for anyone coming out of university, or coming out of high school, or looking for work in this province to have an opportunity to find a job and have a career right here," he said. "I think that's a good thing."

A healthy private sector is also a better way to create jobs, Higgs said, than what he called a Liberal world view that supports public spending.