The parents of 16-year-old Avery Astle say they were told no one was available to come to the Moncton Hospital to retrieve his organs or tissues for donation. Horizon Health Network says staff turnover has created "gaps" in coverage for tissue donation.

'Those beautiful eyes, could someone else see the world through those eyes?' Avery Astle's mother asks

In the two weeks that have passed since losing their only son, Michelle and Tyson Astle have been struck by the number of stories they've heard about 16-year-old Avery being kind to others.

That's why, when Avery died after a crash in Miramichi that also took the lives of three other teenagers, the Astles knew they wanted to donate his organs and tissues.

"Those beautiful eyes, could someone else see the world through those eyes?" said Michelle Astle.

"It would give us some kind of peace to know some piece of him moved on."

But the Astles say they were told no one from the specialized donation team, which is run by Horizon Health Network, was available to retrieve the organs.

That left the grieving Astles heartbroken.

"The idea of him being able to touch lives after his death and help families that are on the list waiting for organs … I know it would have put a smile on his face," Michelle Astle said. "It would have been something he really wanted."

Tyson Astle said, "We were just seeking a reason, something to keep a part of him going."

On the night of April 20, a friend picked Avery up from his shift at Canadian Tire. They were going out to have cake and celebrate their friend Emma Connick's 18th birthday.

On the way home, the driver of the Nissan Rogue — Logan Matchett, Avery's close friend, who was more like a brother — lost control on a dark, rainy part of Nelson Street.

The vehicle, with all four teenagers inside, went into an ice-covered pond, landing upside down. Police said neither alcohol nor drugs were factors in the crash.

In Strathadam, 16 kilometres southwest of Miramichi, Avery's parents began hearing rumours of a crash. They tried to reach Avery, but he wasn't answering his phone, which was out of character.

His father found his last known location by checking Snapchat's map. He rushed to the scene.

"I came across the accident," Tyson Astle said.

"I parked and I ran as close as I could get. A police officer stopped me and told me that there's been an accident and four kids were taken to hospital."

When they arrived at the hospital in Miramichi, the Astles learned that Avery's condition was the most stable of the four. He was breathing with the help of a ventilator and his heart was beating. 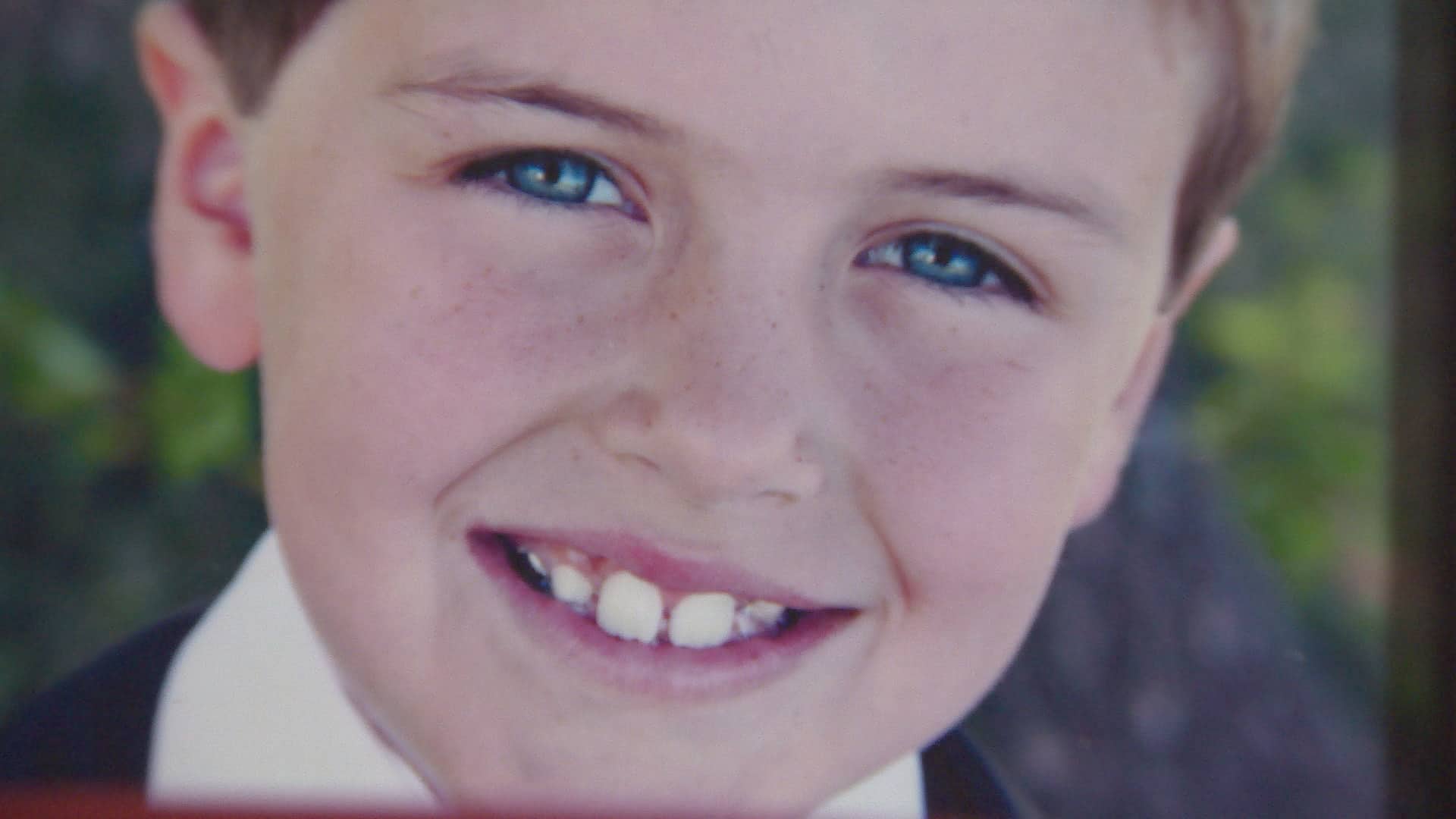 2 years agoVideo
0:49
Avery Astle was one of four teenagers to die after a recent Miramichi crash. Now his parents are grieving again after being told there was no one in the province to available to harvest his organs or tissues. 0:49

Doctors decided he should be flown to the Moncton Hospital, about 145 kilometres south of Miramichi.

"There wasn't much of a chance, but they still felt he should go to Moncton because there's always a chance of a miracle," Michelle Astle said.

Avery went into cardiac arrest during the flight, only 15 minutes away from Moncton.

About 20 members of his family drove to the hospital and were taken to the emergency room.

Medical staff tried to resuscitate Avery, but he didn't make it.

Neither did Matchett, Connick or Cassie Lloyd, the other three who were in the vehicle and who were being treated in Miramichi.

While grieving and processing what happened, the Astles asked about organ donation. Avery's Medicare card would have flagged him as a willing donor.

"I think we knew maybe at that point there may be some organs that weren't viable due to him passing already," Tyson Astle said.

But Avery was a healthy, athletic boy with perfect vision. They hoped some part of him could help others, and they were set on at least donating his blue eyes.

That's when the family said they were told no one was available or on call that weekend to come to the Moncton Hospital and do the procedure.

Avery's parents asked if he could be flown back to Miramichi to see if he could donate there.

But they said they were told the hospital couldn't release the body without a coroner, and there wasn't one immediately available.

"We ended up coming home without any real answers," Michelle Astle said.

Let down by the system

On the night of April 22, more than 24 hours after Avery's death, the Astles said they received a call from a nurse at the Moncton Hospital, who told them they couldn't find anyone to facilitate a donation before the clock ran out. The call came as they were writing their son's obituary.

"She [the nurse] seemed disappointed as well," Tyson Astle said.

"She was trying. She tried Nova Scotia, she tried the province, and she just couldn't get results."

And it could happen to other people.

In a statement, Horizon Health said recent turnover within the specially trained tissue team has created "gaps in our coverage."

The tissue team would be responsible for the removal of eyes.

Until newly recruited team members have been fully trained, "there may be times when we are unable to provide the service," Horizon said. The gap doesn't affect the organ donation team.

"Horizon Health Network and the NB Organ and Tissue Program are aware of the Astle family's concerns and we are sorry that we were not able to provide the opportunity for donation to this family."

No one from Horizon Health Network or the NB Organ and Tissue Program was made available for an interview about how the program should operate or how many people may be impacted by the "gaps," or to answer other questions the Astles' experience raises.

The Astles believe first responders and medical staff did everything they possibly could to save Avery and his three friends, describing their efforts as "heroic."

But they feel let down by the donation system.

They believe staff should ask families about organ donation, rather than wait for families to think of it themselves.

According to the Canadian Transplant Association, an advocacy group, one donor can help more than 75 people and save as many as eight lives, though it's unclear whether all of Avery's organs would have been viable.

As of February, only one hospital in New Brunswick, the Dr. Georges-L.-Dumont Hospital Centre, also in Moncton, was able to retrieve organs after a cardiovascular death.

Kristen Wheaton Clayton, a liver transplant recipient and New Brunswick director of the Canadian Transplant Association, couldn't comment on the specifics of the Astle family's experience. But she said someone is supposed to be on call all the time.

She said the province's organ donation program and the team of nurses who work on it have a small budget because the government doesn't see the program as important.

Wheaton Clayton said there is enough money for staff and the basics but nothing to educate the public or health professionals about the program.

"I've never heard of another government program that has to fundraise just to be able to really do their job," Wheaton Clayton said.

According to figures previously reported by CBC News, 34 donors were referred for organ donation last year in New Brunswick.

Of those, 37 organs were removed from 11 donors. Thirty of those organs went to patients in New Brunswick.

It's not clear whether those numbers include tissue or eye donations.

The Astle home in Strathadam is covered in photos of Avery. Posing beside his 1973 Dodge Challenger, his pride and joy. Celebrating with his hockey teammates from North and South Esk Regional High School, where Avery was a Grade 11 student, after winning a provincial hockey tournament. His hockey sticks are still leaning in the corner of the kitchen.

The Astles had high hopes for Avery. He planned to study engineering and become a lineman with NB Power. Days after his death, his mother found notes Avery took after calling NB Power, trying to learn more about a job.

It's painful for them to talk about what happened to their son, but they don't want another family to be turned away from organ donation.

They plan to start a Facebook group called Let's Act for Avery to encourage other families to share their stories.

"He really was all about doing the right thing … simple as that," Michelle Astle said.

"If this somewhat helps change the system or helps a family, then we're happy about that."