An Indigenous artist takes a vacation alone — and CBSA holds him, X-rays him for drugs

Timothy Hogan, an Aboriginal artist, believes racism was involved when the Canada Border Services Agency searched him for drugs when he returned from a vacation in the Dominican Republic.

Tim Hogan heard several reasons for 5-hour detention, but he believes it was racism

​Timothy Adam Hogan grasped the X-ray machine at the Dr. Everett Chalmers Hospital in Fredericton while a customs officer stood by his side, expecting to find smuggled drugs in Hogan's digestive tract.

As the Indigenous artist waited for the X-ray results, he thought of the sudden, unusual turn his night took after he got off a plane at the airport several hours earlier.

Why was he singled out for this treatment, made to feel as small as an "abused animal," he wondered.

Was it terrible luck, elitism or simply racism?

​Hogan, 40, landed at the Fredericton airport around 7 p.m. on March 6 on a direct flight from the Dominican Republic, where he'd stayed for a week at Punta Cana.

Hogan had gone on vacation alone.

His 15-year-old son, who lives with him in Burton, N.B., was spending March break with his mother and sisters, and a friend of Hogan's had cancelled plans to travel with him at the last minute.

Hogan was one of the first passengers off the plane in Fredericton. He grabbed his bag and was going through customs, when an officer asked him to step aside.

"They said, 'Mr. Hogan, you have to come with us.' So they took me off to the side, and they explained to me that they had suspicions that I was smuggling narcotics."

​Hogan, who joined the Canadian Armed Forces after the Sept. 11 attacks, said the first thing that went through his mind was that someone had hidden drugs in his luggage.

​​As officers with the Canada Border Services Agency examined his bag and his phone, he asked what grounds they had for suspecting him.

"They said because I'm an artist," said Hogan, who was based in Halifax with the navy from 2001 to 2005. "They read it on my file and said that was a trigger, because they don't believe that artists could even afford to go on vacation, basically."

Even harder for the officers to believe, he said, was that an artist could take a four-star vacation in the Dominican Republic in March, flying in a premium class.

The officers suggested it didn't help Hogan that he booked his ticket late, travelled alone and allegedly had a "dry mouth," although he said no one ever checked his mouth.

The agency declined a CBC News request for an interview about Hogan's account of his treatment that night.

While he was detained, another Indigenous man coming through customs was asked to step aside.

"I was thinking to myself, 'What is this, Aboriginal Day?" I thought that was kind of suspicious."​

Unlike Hogan, the second man was able to leave after a few minutes.

The officers took Hogan to a small room and asked him to strip. Without resisting, Hogan said, he took off his clothing piece by piece.

He then asked the officers if he could use the bathroom.

"The first time they said no. Then I told them the second time, I said, 'I got to go and I'm going to go on the floor because I really got to pee.'"

A guard took him to a "jail cell kind of toilet," stood beside him until he was done and told him not to flush or wash his hands. The guard wanted to make sure the artist hadn't dropped anything inside, Hogan said.

"It was overwhelming," Hogan said. "I felt like an animal, they were treating me wrong for no reason." 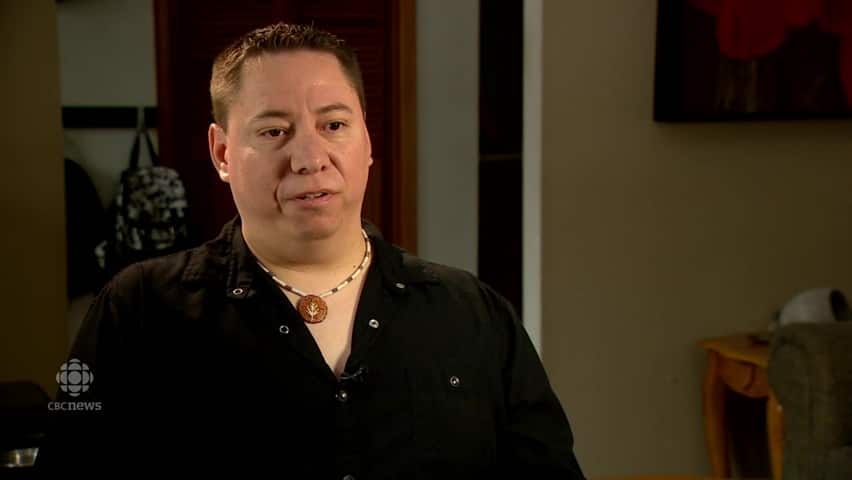 2 years ago
1:37
Canadian customs officers told Indigenous artist Tim Hogan that artists are not supposed to afford a vacation in the Dominican Republic. 1:37

Meanwhile, his parents, in their late 60s, were waiting to take him home. They were confused, Hogan said, because he had never been in trouble with the law.

Hogan asked an officer to tell them to go home, that he would call later.

At that point, the officers told Hogan he could either stay at the airport until he had three bowel movements, which could take 24 hours, or they could take him to the hospital for X-rays to make sure he hadn't swallowed narcotics.

Hogan asked to speak to a lawyer, was given a number for Legal Aid and called it.

"She said pretty much that there's nothing they can do about it," Hogan said of the lawyer. "That [the officers] have authority to do pretty much anything they want to me while I'm at the airport with the security guys."

Hogan chose to go to the hospital, so two guards took him. One drove and the other sat in the back with him.

They were equipped, Hogan said, with guns and vests, but they told him they would not use their handcuffs because he was co-operating.

As Hogan entered the hospital around 9 p.m., two hours after his plane landed, he immediately saw people he recognized.

"It was quite embarrassing for me. As an artist, you kind of sell yourself as a person. The first thing people think is that you have done something wrong.

While waiting for the results, he asked the officers if they'd ever taken a traveller from the airport to the hospital for tests before.

The X-ray results proved Hogan's digestive system was free of bags that might contain narcotics.

CBC News requested an interview with Horizon Health, which operates the hospital. The network wrote back saying it doesn't track instances when X-rays are administered as part of police investigations.

Stories of controversial treatment at the border are nothing new to immigration lawyer Chantal Desloges of Desloges Law Group in Toronto.

She said she and many other lawyers have pushed for an independent watchdog over the Canada Border Services Agency.

"They have so much power," she said. "They can detain people, and because individuals have so few rights at the border they can't say no.

"You want to have an oversight body to keep that power in check."

Desloges said she senses that elitism, at a minimum, was at play when Hogan was detained.

But any lawyer looking into the case more deeply would want to find out if racism was also involved, she said.

"The Customs Act allows the CBSA to detain persons. You don't have charter rights at the border saying you can't undergo a strip search, or you can't be detained for an X-ray search."

That someone is an artist on vacation is not grounds for an invasive search, which the X-ray was, Todgham-Cherniak said.

Public Safety Minister Ralph Goodale promised in this year's budget to create a watchdog for the CBSA. He promised $24.42 million over five years to expand the mandate of the Civilian Review Complaints Commission, which handles complaints against the RCMP.

"People have been arguing for this for years," Desloges said. "Officers have such a broad power at the border that it's kind of astonishing that for so many years they have been allowed to operate without any kind of oversight."

She believes anyone who has been mistreated by border services officers should file a complaint.

"If you keep getting away with things, gradually it just starts to increase and creep up in terms of severity," she said.

About 12:30 a.m., the two CBSA officers drove Hogan from the hospital back to the airport for his bags.

Hogan told them it was too late to call his parents for a drive and asked if they expected him to take a cab home.

He said the officers nodded and pointed at a taxi waiting at the airport entrance.

Throughout the night, Hogan said, the officers had kept calling someone in Moncton for instructions.

"He had never seen me — unless he was looking at me from a camera."

Hogan does not believe the red flags described by the officers were the true reasons he was searched and X-rayed.

"At the end of the day, I believe it's probably because of my race."

Hogan was already planning a vacation for his three kids next spring.

"Now I am thinking, do I really want to put them through this? What if this happens again? It's kind of making me afraid of travelling, and I love travelling," he said.

Two days after he was detained, Hogan called the Moncton CBSA agent who gave orders to the Fredericton officers. He wanted to know why he was singled out, and how he could prevent such an incident next time.

The officer suggested he file a complaint with the agency.

"But he said it wouldn't do much because they have the authority to do what they did. He also said they were just glad I didn't have anything on me."

Maria Jose Burgos is a reporter with CBC New Brunswick based in Fredericton. She is a recent graduate of the journalism program at St. Thomas University. She's originally from Tegucigalpa, Honduras.