A Sackville group is opposing the installation of a second armoured fighting vehicle in the town's memorial park.

While residents agree veterans deserve to be commemorated, some worry the armoured vehicle glorifies war

A Sackville group is opposing the installation of a second armoured fighting vehicle in the town's memorial park.

The retired armoured fighting vehicle, known as a Cougar AVGP, was given to the town from the 8th Canadian Hussars (Princess Louise's) regiment. Sackville town council voted to accept the gift in February and plans to install the armoured vehicle in the Sackville Memorial Park this summer.

But people living in the neighbourhood said they weren't aware of the new addition until workers started prepping a corner of the park for a concrete pad that will house the six-wheeled armoured vehicle.

The park already features an armoured vehicle called a Ferret, a six metre cenotaph with plaques memorializing local soldiers who died in previous wars, a propeller and an anchor.

"I don't feel that it's the best way for a memorial park [to] commemorate veterans and those affected by war."

A testimonial to soldiers

Grue said an armoured vehicle could be an upsetting symbol for people who have first-hand experience with war.

Her grandfather served in the Second World War, where he worked as a tank mechanic.

"He did suffer from [post-traumatic stress disorder] and alcoholism for the rest of his life," she said. "To me, that's the memory that it draws."

Grue said refugees starting a new life in Sackville may also be troubled by the armoured vehicle sitting in the middle of town.

We have all this effort going on to stop bullying and I think this just reinforces that you can solve problems with force. ​​​​- Dr. Ross Thomas, resident

But Jim Lockyer, honorary colonel of the 8th Canadian Hussars, said the Cougar should act as a way to commemorate previous battles.

"This is not glorifying war, if anything it's a memento to discourage it."

He's toured fields in Italy where soldiers belonging to the 8th Canadian Hussars lost their lives fighting during the Second World War. 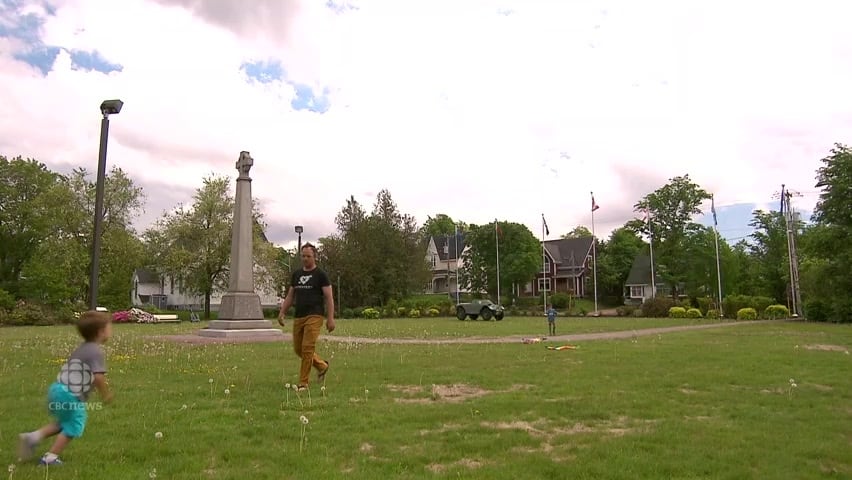 1 year ago
0:48
Some Sackville residents are opposing the installation of a second armoured fighting vehicle in the town's memorial park. 0:48

"There are young men, 18 to 25 years old, one of whom was Stedman Henderson from Moncton, who again did not come home and they're still there," he said.

"So it's a testimonial to their contribution."

What kind of message does it send?

Lockyer said the incoming Cougar was not used in war, but people who served and died used machinery like it.

"It's not glorifying absolutely anything, what it is is recognizing the contribution that members of this regiment made to essentially safeguard Europe. And also safeguard the rights we have, which include the right to disagree with whatever is being proposed."

Lockyer said preparations to have the armoured vehicle moved to Sackville will continue unless he's told otherwise.

In the meantime, residents will be passing a petition around town, hoping to find a way for council to reconsider.

Dr. Ross Thomas, who lives in the area, questions what kind of message the Cougar will send to children who play in the park.

"We have all this effort going on to stop bullying and I think this just reinforces that you can solve problems with force," he said.

Thomas also wonders if there are liability issues linked to having the military vehicle in the park.

"It's inevitable that when kids see that, they want to climb those things, unless you are going to put a big cage around it."