Angela Rehhorn, a 24-year-old conservationist killed in the Ethiopian Airlines crash on Sunday began her last blog post this way: "Don't worry my maritime friends you still hold a very special place in my heart."

From East Coast to West Coast, friends and colleagues grieve the loss of Angela Rehhorn

"Don't worry my maritime friends you still hold a very special place in my heart."

That was the first line in the last blog entry by Angela Rehhorn, a 24-year-old conservationist killed in the Ethiopian Airlines crash on Sunday.

Rehhorn was one of 18 Canadians aboard the flight that crashed after takeoff from Addis Ababa, taking the lives of all 157 on board.

In October the Dalhousie University graduate left her job at the Huntsman Marine Science Centre in Saint Andrews, where she did salmon research, to train with the Canadian Conservation Corps. 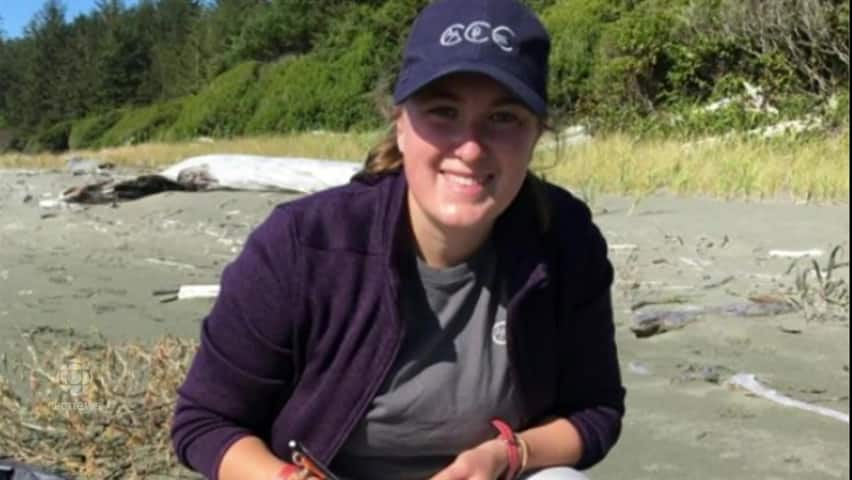 2 years ago
0:48
"Don't worry my maritime friends you still hold a very special place in my heart." That was the first line in the last blog entry by Angela Rehhorn, a 24-year-old conservationist killed in the Ethiopian Airlines crash on Sunday. 0:48

"I've always have had this feeling that I am meant to be on the East Coast and that's where I'll settle," Rehhorn, who was from Orillia, Ont., wrote in her blog "Angie on the Run" on Dec. 16.

"The CCC has provided me with the opportunity to challenge this idea as I hop across the country to Vancouver Island B.C. for a 3-month internship at Pacific Rim National Park Reserve!"

While Rehhorn was experiencing Canada living and working in its wildlands, she left behind close friends and colleagues in Saint Andrews. They are now grieving her death and sharing their favourite memories of her.

"It's very heartwarming and very saddening at the same time," said Jamey Smith, the executive director of the Huntsman centre.

"One of our team here who was very close with Angela, at work as well as personally, described Angela as the type of friend that would put their friendship ahead of themselves," said Smith, while sitting at the lab station and microscope that Rehhorn used to work at.

"There's not many people that would do that. That's a genuine thought and genuine affection created in people, and that will really be missed.

"We're doing the best we can, but I know that the staff is having a challenging time."

Some Huntsman staff and close friends of Rehhorn plan to visit her parents in Ontario and will bring along a salmon made out of blue flowers to honour her memory. They've already been sharing memories of Rehhorn with members of her family to help ease their loss.

"We had a great conversation, we shared a few laughs and there were tears on the phone too," Smith said. "The sense I got is they were soaking in so many memories about Angela's life that they weren't maybe involved with.

"They're just trying to piece things together."

'Angie on the run'

In her blog, Rehhorn described leaving her well-paying, permanent job as "bold," but also wrote that she wanted "to see as much, and learn as much as possible!"

She said, "I try to live by taking the roads that aren't clear and safe, for those are the paths that will lead to new adventures."

That led her to the Canadian Wildlife Federation, where she began working and training as a conservationists.

"It's a tragic loss," said John Wiersma, the manager of the program. Wiersma oversaw Rehhorn during a 14-day leadership retreat in Canadian wilderness.

"It was actually hiking in the Rockies," said Wiersma, who trained her in CPR and first aid before the group spent two weeks living in the wild.

"She was very down to earth, very sort of 'get her hands dirty and jump right in.' She was looking for those experiences."

Rehhorn's blog gave some insight into her feelings during that expedition that left her in awe of the mountains.

"It's fine; I'll be fine," I kept reassuring myself. I left my life in New Brunswick and arrived in Alberta expecting yet another hike and camping trip; no big deal right?"

It was during that excursion that Rehhorn met a fellow conservationist who would become her roommate and one of her best friends.

"We did everything together," said Silvana Botros, who admired Rehhorn's dry sense of humour. "We shared a car. It was a full-on sister relationship."

In addition to sharing tents, the two also moved in together when they moved to Ucluelet, on Vancouver Island, as part of the Canadian Wildlife Federation's program placement.

"We had a really good arrangement," Botros said with a laugh. "I got to cook and she cleaned.

"We were both pretty spontaneous in the things that we wanted to do. So we'd be like, after work, thinking that we were just going to stay home. But then we'd be, like, 'You know, never mind, we're going to go to the beach at 10 o'clock and it will be fine and it will be fun.'"

At the program's end, Botros moved to Ottawa but said she still spoke with Rehhorn daily.

When Rehhorn left Canada for Ethiopia as part of a UN youth delegation of environmentalists, she flew out of Ottawa, giving the friends two days together before the fatal crash three days later.

"She was such a lively person," said Botros. "She lived her life exactly how she wanted to."