Charges were laid against a 69-year-old man accused of attacking a nurse at the Dr.-Georges-L-Dumont University Hospital Centre in March.

Charges were laid against a 69-year-old man accused of attacking a nurse at the Dr.-Georges-L-Dumont University Hospital Centre in March.

Randy Van Horlick was charged at the Moncton Provincial Courthouse on Tuesday morning.

Van Horlick is facing one count of assault causing bodily harm, which carries a maximum penalty of 10 years in prison or 18 months on a summary conviction.

The alleged attack happened in the nurse's office behind closed doors before security arrived on March 11. The attack allegedly went on for about 11 minutes, leaving the nurse with a brain contusion and a broken nose.

Van Horlick, who is the husband of one of the patients at the hospital, was present in court this morning but did not enter a plea. Instead, the accused indicated he wished to apply for legal aid.

Van Horlick is from Acadieville, a village about 100 kilometres north of Moncton. He will be back in court on July 16 at 9:30 a.m.

Dozens of nurses and supporters marched to the courthouse Tuesday to denounce workplace violence. 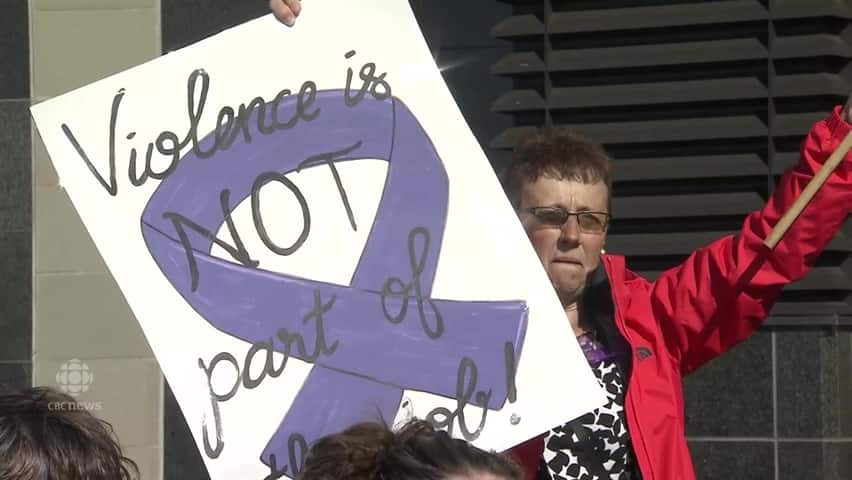 1 year ago
0:58
Norma Melanson, mother of the nurse who was allegedly attacked at the Dr.-Georges-L-Dumont University Hospital Centre in March, said the presence of colleagues marching to denounce workplace violence is a "great support." 0:58

The nurse and her mother were in court, as were many supporters. The courtroom was full, with many people standing.

Van Horlick was given a court order not to have any contact with the nurse, Natasha Poirier, or go near the Dr.-Georges-L-Dumont Hospital.