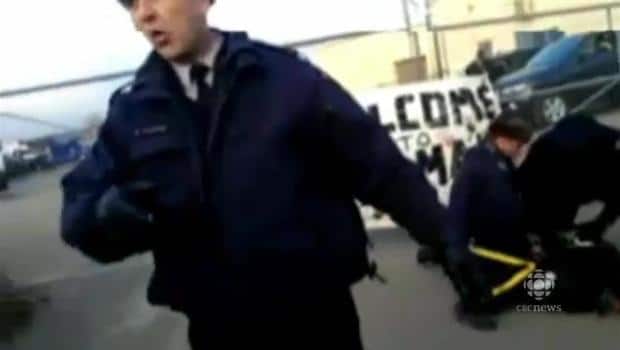 Two women and one man were arrested in the Caledonia Industrial Park at about 8:45 a.m. for breaching a court order, said RCMP Const. Jullie Rogers-Marsh.

She did not specify which court order, or say how the protesters were in violation.

A handful of aboriginal protesters were setting up in a parking lot near a compound for SWN equipment at the time, according to protester Edgar Clair, who was live streaming a video from the scene.

"I suggest you leave the property because you'll all be arrested," a police officer can be heard saying.

"I suggest you leave or you're declaring war right now," Clair replies.

"The court injunction says we have to be 20 metres, 20 metres parallel to SWN equipment. The way they're parked, technically we're allowed to be here," Clair said.

The arrested individuals are expected to face charges in court on Tuesday.

SWN went to court last Friday, seeking an injunction to keep protesters 20 metres from the side of roads where the company is working and 250 metres away from the front or back of its trucks.

Court of Queen’s Bench Justice Judy Clendening ruled in favour of the company, ordering protesters not to interfere with SWN's work and giving police power to enforce the order.

A lawyer for SWN had said the company needs 10 days to complete its exploration for shale gas in New Brunswick.

SWN subcontractors resumed work on Monday, laying geophone lines along Highway 11 between Rexton and Bouctouche, under the watchful eye of police.

"We certainly respect the rights of everybody to demonstrate, as long as they do so in a peaceful, lawful, safe manner," said Const. Jullie Rogers-Marsh.

"We are going to continue to monitor the situation and ensure public safety."

No protesters were in the immediate area.

Seismic trucks are expected to be testing along Highway 11 within the next few days.