New Brunswick’s forest industry will get help from an $18 million federal initiative to tackle what experts describe as an imminent outbreak of spruce budworm in the province.

New Brunswick one of the most forestry-dependent provinces in Canada, agency says 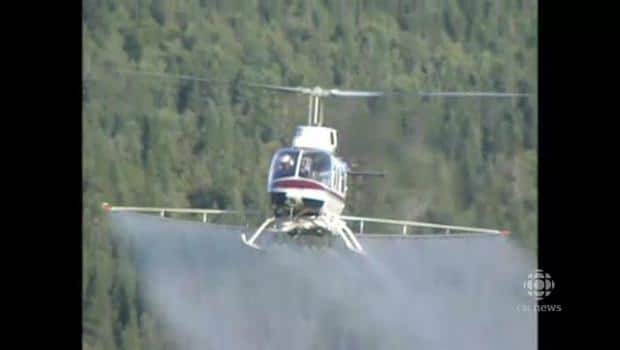 7 years ago
1:59
Funding to try and fend off the next spruce budwork outbreak was announced Tuesday. 1:59

New Brunswick’s forest industry will get help from an $18 million federal initiative to tackle what experts describe as an imminent outbreak of spruce budworm in the province.

The Spruce Budworm Early Intervention, introduced in the 2014 federal budget last week, will see $18 million put aside to develop and implement the program over the next four years.

A spruce budworm outbreak is currently occurring in Quebec, and new outbreak is imminent in New Brunswick, according to a press release from Atlantic Canada Opportunities Agency, which will lead the initiative in Atlantic Canada.

ACOA and its Quebec counterpart will work with Natural Resources Canada, provincial governments and industry stakeholders to develop the initiative, said Rob Moore, regional minister for New Brunswick and minister of state, who met with industry and government officials at the Hugh John Flemming Forestry Centre on Tuesday.

The spruce budworm historically experiences a population explosion every 35 to 40 years, leading to widespread defoliation in evergreen forests and massive losses for the forest industry, according to ACOA.

The initiative aims to keep the spruce budworm population under control and prevent it from spreading. It also aims to come up with environmentally responsible solutions with the least possible disruption to the ecosystem.

New Brunswick is one of the most forestry-dependent provinces in Canada, according to ACOA. The province’s forest sector generated an estimated $2.5 billion in economic activity, or over five per cent of the province’s GDP, in 2010, and employed more than 12,600 people, according to the NB Forest Products Association.

During the most recent significant outbreak between 1977 and the early 1990s, just over half of the province’s total area was affected at one point.

The initiative’s details are still being finalized, but it is expected to move forward quickly, according to ACOA.