Trump presidency 'an extension of his brand,' and Trudeau's buying in: Naomi Klein

Canadian author and writer Naomi Klein argues that U.S. President Donald Trump's rise to power is not an aberration but a culmination of his power-and-money-based brand that appeals to fans, which she argues includes a certain Canadian prime minister.

'His brand that he’s been fostering over many years is completely immoral,' Klein says of Trump

In her interview with The National's Wendy Mesley, Canadian author and writer Naomi Klein argues that U.S. President Donald Trump's rise to power is not an aberration but a culmination of his power-and-money-based brand that appeals to fans, which she argues includes a certain Canadian prime minister.

Watch the interview on The National on Sunday at 9 p.m. ET.

Promoting her new book No is Not Enough, Klein said the way Trump has been covered so far was inadequate.

"They way in which we were talking about Trump lacked historical context," the No Logo author told Mesley. "It was treating him like this kind of Martian who came from outerspace... and I wanted to make the argument he comes from somewhere. He's very made in the U.S.A."

Klein argued that Trump is a "culmination of a great many dangerous trends" in the U.S., pointing to how his anti-immigration rhetoric resonates with his base. She said that "scandals don't stick to him" because his branding is "completely immoral."

"His brand is money and power, and his personal brand is being the boss who can get away with anything," she said, adding the example of the Access Hollywood tapes in which Trump said, "You can do anything" if you're a celebrity.

Whereas companies that push positive values can get swept up in scandals that contradict them, Klein argues Trump's base are not swayed when the president is embroiled in scandal. That's because he is simply "fulfilling the promise of his brand."

"I think Trump has turned the U.S. government into an extension of his brand, and his relationship with his voters is very unlike the traditional relationship of a politician and its constituencies, who have a right to accountability."

Klein also accused Canadian Prime Minister Justin Trudeau of "playing along with Trump's brand," bringing up the example of Trudeau posing in the Oval Office with Trump and his daughter Ivanka.

"That was a gift to Ivanka's brand … it's quite extraordinary, really," she said. "It's one thing to say you don't want to pick a fight with our biggest trading partner, but it's another thing to do PR for them like that."

"I think he should've taken a lot more heat for that," Klein said, adding Trudeau doesn't "have to go that far" to build a relationship with the White House.

For Klein, those opposed to Trump can only effect change when they challenge his money-and-power brand — by "making him less rich" through boycotts of his family's products and properties. It will also help if critics question his claims of authority by suggesting "other people are pulling his strings."

"One of the tools is to erode the brand on its own terms," she said. 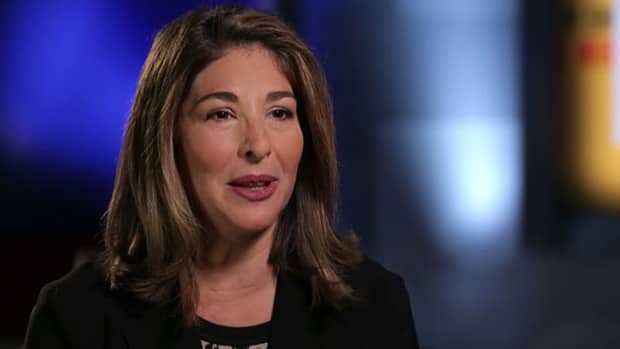 3 years ago
9:30
Canadian author Naomi Klein discusses how Donald Trump has made the U.S. government an extension of his own personal brand, and what people can do to chip away at its power. 9:30
CBC's Journalistic Standards and Practices|About CBC News