Solving the mystery of the NHL's 1st game

For decades historians and hockey nerds have debated where and when the NHL's first puck was dropped. A new discovery finally sheds light on the answer.

They're actually trick questions, because no one knows for sure — that is, until now.

For many decades, ever since the National Hockey League firmly established itself as the planet's premier professional circuit, neither hockey historians nor the sport's trivia-obsessed fans have been able to say with certainty where the very first NHL action took place or who recorded the league's first goal.

That's because the newly formed NHL launched its first season on the evening of Wednesday, Dec. 19, 1917, with two games — one in Ottawa and one in Montreal.

It's long been known that the Ottawa game between the Montreal Canadiens and host Ottawa Hockey Club was scheduled to begin at 8:30 p.m. But the official start time of the other game, a clash between the Toronto Hockey Club and the hometown Montreal Wanderers, had remained unknown until a key discovery last month.

The new evidence — verified by the Society for International Hockey Research (SIHR) — has been found in a long-overlooked Montreal newspaper that finally clarifies where the first-ever NHL puck-drop took place and who notched the league's history-making first goal.

The ad, touting the Toronto vs. Wanderers game "on artificial ice," specifies ticket prices between 50 cents and $1.55 and a scheduled start at 8:15 p.m.

That means Montreal, already acknowledged as the birthplace of modern hockey  — thanks to a well-documented indoor game in March 1875 — and the winner of the first Stanley Cup in 1893, is also where NHL players faced off for the very first time.

The NHL's inaugural scorer? A Wanderers defenceman named Dave Ritchie, who ended the 1917-18 season playing for Ottawa after the Wanderers' rink burned down and the team folded.

The game took place less than a month after the NHL was formally constituted at a meeting of team owners on Nov. 26, 1917, at the Windsor Hotel in — once again — Montreal.

The first-game revelation comes in the midst of the NHL's yearlong celebration of its 100th anniversary. The festivities will culminate on Dec. 16 with an outdoor game at Ottawa's Lansdowne Park between the Ottawa Senators and Montreal Canadiens. 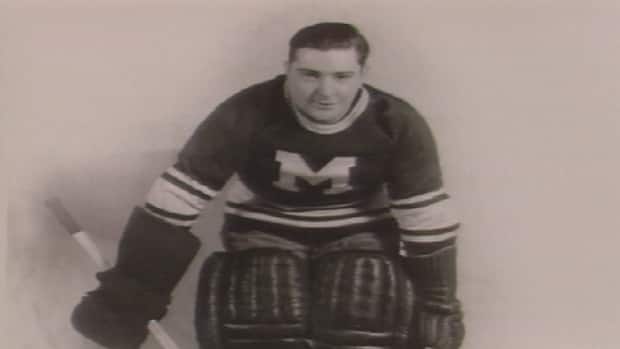 Early days of the NHL

4 years agoVideo
4:19
NHL goaltender Bill Beveridge talks about the historic rivalry between Montreal and Toronto in this archival video from October 1991 4:19

Last month, when NHL commissioner Gary Bettman and the owners of the Senators and Canadiens announced plans for the outdoor game, Bettman pointedly described the event as a centennial tribute to the league's first "night" of play — specifically, "the night that launched 100 years of NHL hockey."

Ottawa Mayor Jim Watson, however, categorically called it a "celebration of the 100th anniversary of the very first NHL game, which took place in the nation's capital in 1917."

The Ottawa game in 1917 was held at a long-gone downtown arena close to Parliament Hill. The other match that night was at the Montreal Arena — another vanished ice palace that once stood at the corner of Ste-Catherine Street and Wood Avenue in the Montreal neighbourhood of Westmount — between the Wanderers and Toronto.

Over the years, obvious questions lingered and fuelled endless debate: Were the two games played simultaneously or did one start earlier? And which of the games produced the earliest goal?

As Montreal author Don Weekes noted in his 2009 volume The Biggest Book of Hockey Trivia, Canadiens star Joe Malone scored six and a half minutes into the first period of the game in Ottawa while Ritchie scored at the one-minute mark in Montreal.

"Unfortunately," Weekes noted, "the Montreal game's start time remains unconfirmed. So, credit both the Wanderers' Dave Ritchie and Joe Malone of the Canadiens as the first goal scorers in NHL history."

As recently as December 2016 — the 99th anniversary of the NHL's first games — news sites across the country published a Canadian Press "Today in History" item that stated: "Either Dave Ritchie of the Montreal Wanderers or Joe Malone of the Montreal Canadiens scored the first NHL goal. The dispute comes down to the fact there is no remaining record of when exactly each game started."

But in their 2002 book Deceptions and Doublecross: How the NHL Conquered Hockey, authors Morey Holzman and Joseph Nieforth argued that Ritchie — despite "some debate amongst hockey fans over the years" — probably deserved first-goal honours. Why? Because the start of the Canadiens-Ottawas game was delayed 15 minutes by a contract dispute involving several of the Ottawa club's players, while "the Toronto-Wanderers game started on time."

On time, yes, but the central mystery remained: At precisely what hour was the Montreal game scheduled to start? If the puck-drop was set for 9 p.m., then the Ottawa game and Malone's goal might have come first.

The discovery of the advertisement in Le Canada — and its clear indication that the Montreal game was to begin at 8:15 p.m. — finally resolves the issue.

There's never been any suggestion that the Montreal game was delayed. So combined with the later, 8:30  p.m. scheduled start in Ottawa — and the 15-minute delay on top of that — it's clear that the city of Montreal, the visiting "Torontos" and the hometown Wanderers (including opening scorer Ritchie) had a half-hour head start in claiming their unique place in NHL history.

Montreal-area hockey historian Jean-Patrice Martel, president of SIHR and co-author of the 2014 book On the Origin of Hockey, was surprised the telltale advertisement had not been discovered earlier.

There are situations where the difficulty is in knowing what to look for.- Jean-Patrice Martel, hockey historian

"I did not find any book, article, blog entry or even exchange on the SIHR electronic discussion group (or any other) that stated that the Wanderers' game had started at 8:15 p.m.," said Martel, who discussed the finding with other SIHR members, as well.

He also checked another historical French-language newspaper, La Patrie, for additional evidence of the Toronto-Wanderers start time — and, within minutes, found a virtually identical game-day advertisement confirming the 8:15 p.m. faceoff.

Now, he said, Montreal can claim the first-game honour and "Ritchie's goal can safely be considered to have been scored at least 25 minutes earlier than Malone's."

Among the other scorers in Montreal was Wanderers forward Harry Hyland, who notched three first-period goals against Toronto that night — now confirmed as the NHL's first hat trick — and went on to score five goals by the end of the game.

The NHL's opening-night game in Montreal offered two other nuggets for fans of hockey history. The Wanderers goalie — now confirmed as the first netminder in NHL history to earn a win — was Bert Lindsay. He was the father of future NHL legend Ted Lindsay, whose name adorns the trophy given annually to the league's most outstanding player, as chosen by his peers.

And the Wanderers' player-coach Art Ross, a high-scoring defenceman in the pre-NHL era and namesake of the trophy given today to the NHL's top point-getter, recorded his first and only NHL goal near the end of the second period of the Toronto-Wanderers match. It was described by Le Canada as "le plus beau point de la soirée" — the most beautiful goal of the night.

The Montreal Arena — where it can finally be said with confidence that the NHL got its start — was gone within two weeks of that first game nearly a century ago.

A catastrophic fire consumed the 20-year-old rink on Jan. 2, 1918, and the Wanderers franchise, too, went up in flames. The club's sole NHL victory was its 10-9 win over Toronto in the game that we now know marked the true beginning of the league — and "launched 100 years of NHL hockey."