The Phi Foundation's latest exhibition serves, in part, as a documentary of the famous 1969 Montreal bed-in by John Lennon and Ono.

Exhibition 'Growing Freedom, Arising, and The art of John and Yoko' runs until September 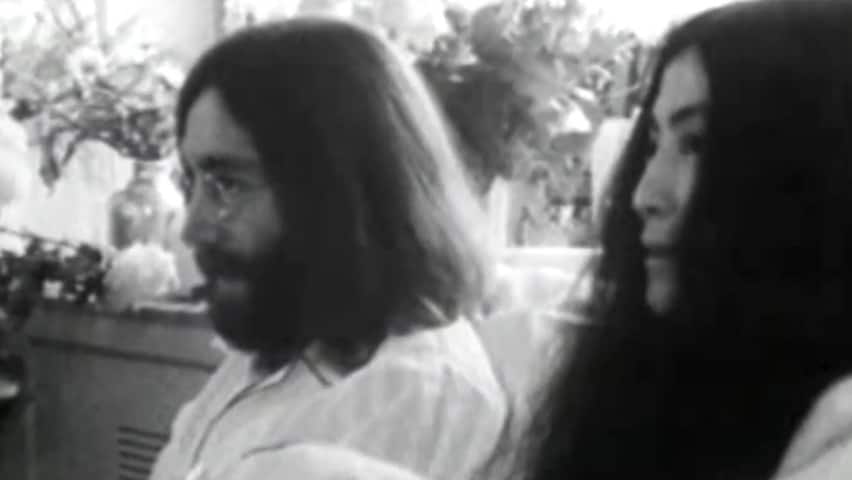 The Phi Foundation is promising special surprises in its Yoko Ono-centric exhibition today — the 50th anniversary of the famous bed-in by John Lennon and Ono which took place a few blocks away at The Queen Elizabeth Hotel.

Growing Freedom, Arising, and The art of John and Yoko brings historical, political and artistic notes together in one place.

Part of the exhibition serves as a documentary of the bed-in for peace that began on May 26, 1969.

Ono, now 86, married Lennon in 1969 and the couple used their honeymoon to stage two bed-ins for peace, one of which was at the Queen Elizabeth Hotel in Montreal.

"I think it is a really great way to encapsulate this idea that the world is going so fast and we don't know how to trust anymore," said Phi Foundation managing director, and the exhibition's curator, Cheryl Sim.

"In a way, this gives us the opportunity to think about what it means to be reactive."

Sim said that even after all these years, the relevance of the bed-in endures. She said the couple set the bar for celebrities using their fame for social good.

The exhibition also offers participatory works created by Ono and a large, submission-based work focused on stories by other women.

"It's a show that really wants to underscore all the facets of art-making that Yoko Ono presents to us," said Sim.

Ono offers instructions to the public and leaves it to them to interact with everyday objects provided in the gallery space — objects like dishes, ladders and nails.

"It's going to be very hands on, very active," Sim said.

This style of work has been part of Ono's story as an artist for the past 60 years, her instruction-based works started around 1955.

It has also featured prominently in the John and Yoko story since — as the legend goes — they first met in a London art gallery when Lennon wanted to contribute to one of her exhibitions by hammering a nail into the wall.

The final branch of the exhibition's offerings, Arising, is a call-out by Ono to Montreal women specifically, but women around the world as well, to share stories of the abuse they've endured just for being women.

They are invited to submit these stories along with a picture of their eyes and their first name, if they choose.

Sim said submissions have already been coming in online and that the stories will be displayed in the gallery space.

After the show closes in Montreal, it will go to Amsterdam in 2020, and more stories will be added to there.

Entry to the exhibition is free and the Phi Foundation (not to be confused with the nearby Phi Centre) can be found at 451 and 465 Saint-Jean Street. Growing Freedom, Arising, and The art of John and Yoko runs to September 15.