A small, basement venue in Montreal's McGill Ghetto neighbourhood is known as a mecca for folk music and spoken word performances and this weekend it celebrated 50 years. 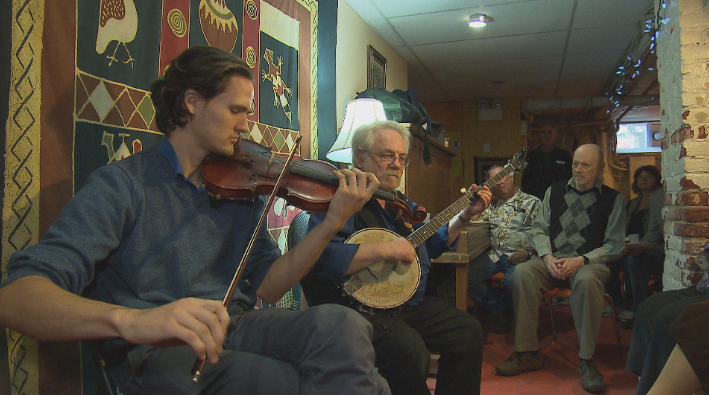 6 years ago
Duration 1:10
This weekend the Yellow Door Coffeehouse celebrated its 50th anniversary. The small music venue in the McGill Ghetto is famous for its spoken word and folk music nights.

A small basement venue in Montreal's McGill Ghetto neighbourhood is known as a mecca for folk music and spoken word performances and this weekend it celebrated 50 years.

The Yellow Door is a community organization which was founded in 1904 to promote morality and religion at McGill University.

Over time, it became more independent and started new initiatives to help seniors, students, people in financial difficulty and in the 1960s, draft dodgers.

"The war resisters of the late 60s and 70s were processed here," said musician Kevin Head.

"Many of them were musicians and we would play with them. They came through the Yellow Door. This was their first stop to be documented and I just thought that was so awesome."

Head started coming to the Coffeehouse in 1971 and said not much has changed — it's still a place supported by a sense of community.

For Marc Nerenberg, the president of the board of directors for the Yellow Door and coordinator of the Coffeehouse, he remembers it as a place where in 1966 he could get a cookie, a coffee and take in some music all for 75 cents.

The Coffeehouse sits 50 people and there is a strict "no talking" policy when music is being played.

The venue hasn't installed microphones or done any major renovations since it opened. But some things have changed since the 60s and 70s.

"Everyone smoked cigarettes," former Coffeehouse coordinator Chuck Baker said, adding that the smoke was so thick it hung down to level of people's faces.

"It's amazing we can still breathe."

During Sunday's anniversary brunch the small venue was full of people who considered it a second home during different eras in its 50-year run.

But there are always new people joining the community.

Gareth Dicker is the vice-president of the board of directors for the Coffeehouse and plays violin at the venue.

He describes the venue as unique because everyone supports the performers, even if they new to playing.

"You come here for the music as much as for the community. My whole friend group is based on the coffeehouse."