Despite a sparsely attended quarter-final and complaints of sky-high ticket prices, Hockey Canada hopes for a strong turnout in today's semifinal matchups at Montreal's Bell Centre.

A tournament featuring the world's elite hockey prospects in the spiritual home of the game — it should be an easy sell, right?

Apparently not. Only 10,215 people — less than half the capacity of Montreal's Bell Centre — were on hand for Monday's 5-3 quarter-final win by Canada over the Czech Republic.

High ticket prices, a lack of star power, and the fact the tournament was jointly hosted by Montreal and Toronto only two years ago are all being blamed for disappointing ticket sales at this year's IIHF World Junior Championship.

Despite the poor turnout, organizers are hoping for a stronger showing in the remaining games, starting with today's semifinals that will see Russia play the U.S., and Canada face Sweden.

"The Canadian games continue to grow in interest and we look forward to a great semifinal against the Swedes," said Scott Smith, head of Hockey Canada.

Canada's games during the preliminary round in Toronto were a bigger draw, with near-capacity crowds at some matches.

Still, organizers acknowledge overall attendance has been less than expected. Toronto and Montreal also co-hosted the event in 2015, and Smith said it may have been a mistake to book the event in the same cities only two years later.

"I think a special event is less special when it's here every second year," he said.

The poor turnout in Montreal, however, was an eye-opener for fans at home and renewed questions about the pricey cost of entry.

An upper-bowl ticket for the quarter-final went for $50. But the Bell Centre was so empty, many fans roamed freely to choose better seats.

For the semifinal, prices range from $40 to more than $200, plus fees. Plenty of tickets were still available online on Tuesday.

Hockey Canada has already said it will re-examine its ticket prices and sales procedures before hosting the tournament in Vancouver and Victoria in 2019.

The organization also faced complaints about ticket prices during the 2015 edition of the tournament. Prices were slashed by 30 per cent this year to meet those concerns.

Marc Dumont, who covers the NHL's Montreal Canadiens for the website Eyes on the Prize, believes a lack of superstar talent this year hasn't helped attendance figures.

"What Hockey Canada is doing is they are pricing themselves out of most people's markets," he said.

"At this particular point, I think most people in Montreal are realizing it simply isn't worth it."

The Canadiens regularly sell out the Bell Centre, and those tickets aren't cheap either.

Cheapest ticket for world-junior gold-medal game at the Bell Centre is $97.50. Most expensive is $257.50. Don't expect a sellout. <a href="https://t.co/CpocWcx1rf">pic.twitter.com/CpocWcx1rf</a>

However, Dumont said attracting big crowds for junior games can be difficult in Montreal, which he called first and foremost a "Habs town."

"The junior hockey culture isn't necessarily that strong in big cities," he said, suggesting that in future Hockey Canada may want to look at "smaller locations with more reasonable arenas and more reasonable pricing."

Low ticket sales may not only be hurting the bottom line of the tournament organizers. They threaten to sap the energy of the home team as well.

Some of Canada's players admitted they were disappointed to see so many empty seats at the 21,000-seat Bell Centre.

"We were expecting a crowd like Toronto," captain Dylan Strome said after the 5-3 win over Czech Republic.

"We got onto the ice and it was like, 'Hopefully people are coming in.' It did kind of fill out toward the end of the game. And they were still loud. It is the best building in the NHL. It's loud and crazy even if there are a couple of empty seats." 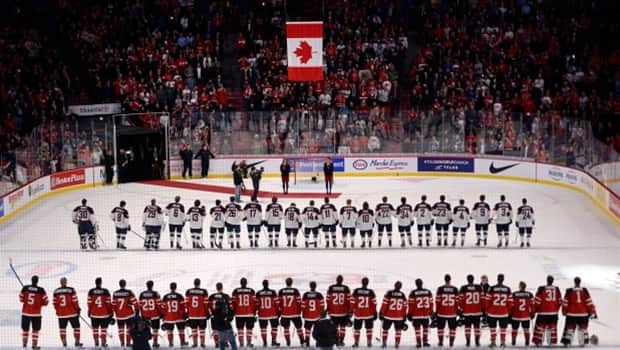