A winter of discontent? What the political season holds in store for Quebec

Quebec is entering a volatile political season. Expect the unexpected between now an the 2018 election.

Incentives are mounting for opposition politicians to challenge the status quo

Quebec is entering a volatile political season. A provincial election is on the horizon and, after remaining static for years, polls now suggest a fundamental realignment of the party order is a possibility.

More proximate surprises could be in store at the Parti Québécois leadership review this weekend, in next month's byelection in a one-time Liberal stronghold and in province-wide municipal elections at the start of November.

These political contests come as politicians at all levels of government are confronting a series of divisive issues: the temporary surge in asylum seekers crossing the Quebec border illegally, a bill that could regulate what Muslim women can wear in public, an investigation into systemic racism that many feel unnecessary.

When, following a demonstration by far right group La Meute, Quebec City Mayor Régis Labeaume spoke of an "immense unease" in the province, he had several of these issues in mind.

Labeaume blamed the unease on the reluctance of Quebec's political class to discuss these issues openly.

Granted few politicians wade into discussions with as much abandon as Labeaume, but the volatility of the coming season is being fed less by the silence of Quebec politicians, than their jockeying over what is unacceptable to say in public.

Amid the uneven global surge in populism, one common way of explaining the sudden willingness of voters to buck common sense is by invoking the Overton window.

The concept, the product of an otherwise obscure libertarian thinker by the name of Joseph Overton, has come to refer to the range of ideas that are widely acceptable to the public.

Overton believed that by advocating unthinkable ideas cogently, elites can help push less radical proposals into the acceptable range. Over time, so the theory goes, what was once unthinkable becomes mainstream.

The spike, beginning in late July, of mainly Haitian asylum seekers coming into the province from the U.S. provoked skirmishes around Quebec's own Overton window.

Last month, for instance, PQ leader Jean-François Lisée described the asylum seekers as "Justin Trudeau's guests." An MNA from his own party, François Gendron, called him out, if politely.

"I would have preferred [he] not have used these words," said Gendron, dean of the PQ caucus. That sentiment was echoed by Louise Harel, who was a PQ MNA for more than 25 years and a former interim leader of the party.

Lisée rebuffed the criticism, saying he was merely providing a bit of real talk. "I say things as they are. I am authentic. I think, I say," he told reporters.

The PQ is down in the polls, trailing not just the governing Liberals but the Coalition Avenir Québec as well, who are now within spitting distance of the lead. On identity issues, the prevailing wisdom is that the PQ and CAQ are competing for the same voters.

For his part, CAQ Leader François Legault used the asylum issue to repeat calls for lower immigration levels, calling the border a "sieve" and warning of a "stampede" towards Quebec.

When Premier Philippe Couillard accused him of fear mongering, Legault retorted that voters were growing tired of his "lectures about tolerance when faced with immigration."

The CAQ leader said the coming byelection in Louis-Hébert would be their chance to teach Couillard a lesson in turn. 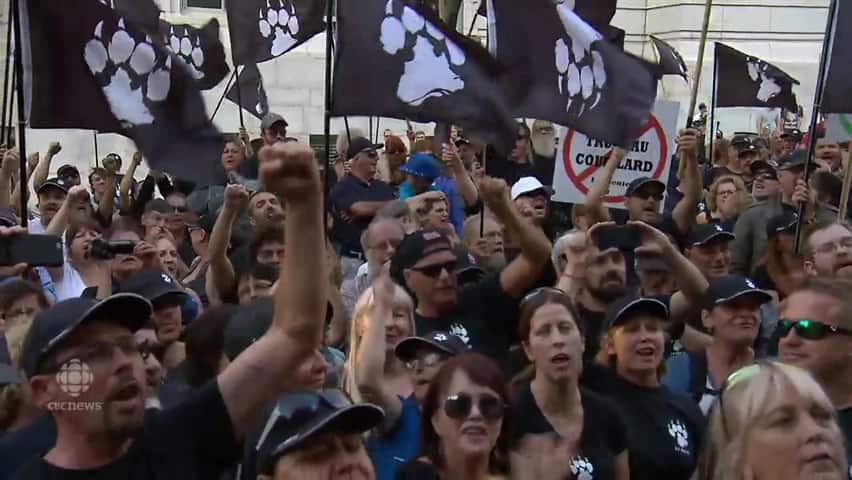 Out of the Shadows: Inside La Meute

The Liberals, save for an 18-month spell, have governed the province since 2003. Dislodging them from power means convincing voters to entertain a set of policies that haven't held sway for more than a decade.

On immigration, and a host of other identity issues, Lisée and Legault are working to make acceptable positions that were for many years outside the province's social-democratic mainstream.

Their political futures depend on breaking with that tradition, which the Liberals have claimed so successfully.

The volatility of the coming political season lies in the proliferation of opportunities and incentives to move Quebec's Overton window.