Who's afraid of the big bad wolf? Not Montrealers

There is a yellow-eyed wolf who makes the rounds of the Montreal Metro, violin in hand, mingling the melodies of Bach and Chopin with the roar of the passing trains. CBC/QWF writer-in-residence Emira Tufo brings you the musician behind the mask.

This is the third in a series of essays by the 2019 CBC Montreal/Quebec Writers' Federation writer-in-residence, Emira Tufo.

We have a saying where I come from: Ko pjeva zlo ne misli. He who sings means well.

We have another saying: Vuk dlaku mijenja ali čud ne. The wolf's pelt changes, but his nature stays the same.

Proverbs like these have been passed on for generations in order to instruct people about the intricacies of human nature: song is good, wolf is bad.

Wolf is always bad, regardless of the colour of his pelt, and, if the proverb is taken to its logical conclusion, wolf neither sings nor harbours good intentions.

Violin tucked under his furry chin

And yet, there is a yellow-eyed wolf who makes the rounds of the Montreal Metro, violin in hand, offering the comfort of music to the crowds of humans, mingling the melodies of Bach and Chopin with the roar of the passing trains and the familiar voice of Michèle Deslauriers: Attention à tous les passagers. Il y a un ralentissement de service sur la ligne … (and you pause, frozen in suspense, hoping not to learn, as you invariably will, that it is, indeed, your line. Again.)

He is a white wolf, finely dressed in a green corduroy jacket and burgundy trousers, as if he has just stepped off a classical stage.

His large eyes gleam with sincerity and a touch of sadness. In the wolf's hands, the violin sobs and sighs and laughs and sings.

Passersby stop to listen — mesmerized, it seems, as much by the music as by the surreal spectacle: a wolf in shiny Oxford shoes, with a violin tucked under his furry chin! 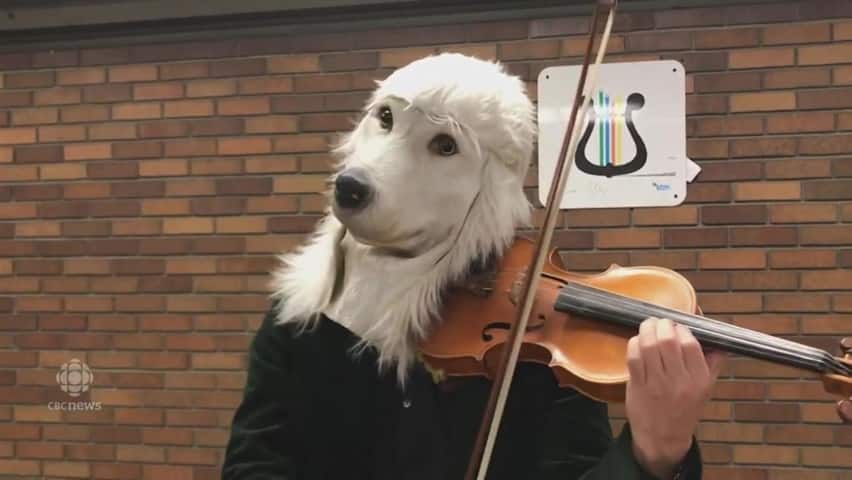 The "wolf violinist" serenades commuters in the Montreal Metro

As it happens, he is a resident of Montreal, not an animal spirit, and like many of the city's inhabitants, he comes from a place far away. He has been playing the violin since he was seven years old.

In his homeland, the instrument alleviated years of compulsory military service.

As he explains over spinach soup and a slice of quiche, he successfully auditioned for the army orchestra and served his time by playing classical music for presidents, ministers and visiting foreign dignitaries. Nor is he a stranger to concert halls.

The idea to play in the Metro came to him from a 1994 film, Le joueur de violon, in which a successful concert musician abandons the stage and the spotlight to play, instead, for the people in the Paris Metro.

For our wolf violinist, who wishes to remain anonymous, this is a way of sharing beauty with and expressing gratitude to his adoptive town.

The idea for the mask came later, as a nod to a popular Korean children's song, A Concert in the Forest, in which a fox plays the violin while a rabbit dances.

Miraculously, the fox does not eat the rabbit, which does, indeed, confirm that those who sing mean well.

The mask hides his fear, he says, for it takes some courage for him to play, but it also seems to put his audience at ease: it removes the discomfort they might feel about stopping to listen and whatever transaction this might entail.

The wolf plays whenever his heart becomes too full, he explains. He then has no choice but to pick up his instrument and to descend into the Metro, seeking comfort through music and giving it in turn.

His audience responds in touching ways. Those whose hearts are heavy stop to listen and weep. Sometimes, they confide a story of recent loss: a person or a beloved pet. Under the mask, the wolf, too, sheds tears.

Some feel inspired to share their own art, dropping poetry and sketches into his violin case: There is beauty behind the mask, a verse in a poem says. Some simply leave a note: You have made my day. This, in turn, makes the wolf's day and replenishes his heart.

Each station has its flavour. At Guy-Concordia, the wolf is approached by students wishing to take music lessons. At Square-Victoria-OACI and at Bonaventure, he is solicited to play at corporate events. At Place-des-Arts, he plays for generous crowds of people coming out of classical music performances, their own hearts still not satiated.

His favourite station, however, is Laurier. Here, he was offered an old violin by a gentle lady who found the wolf worthy of the heirloom.

He was also approached by a woman who asked if he would come to her home to play for the birthday of her beloved. Which he did, while the elderly couple danced and cried a little.

And so, through the violin, he feels embraced by the city and embraces it in turn.

When he is not playing and he sets aside his mask, he is a self-taught technology guru, developing online platforms for learning — including learning how to play the violin.

In 2007, the world-renowned violinist, Joshua Bell, donned a pair of jeans and a baseball cap and played anonymously in front of a Metro station in Washington, D.C. He played some of the most intricate pieces of classical music ever written.

During the 45-minute performance, 1,076 people walked by, but only seven stopped to listen for at least a minute. Bell collected $32 and change.

Perhaps Montreal is simply a very special place. Or maybe Bell should have worn a mask and played in the forest.

Emira Tufo is the 2019 CBC/Quebec Writers' Federation writer-in-residence. A lawyer and a writer, Tufo has written for The Globe and Mail, performed at Montreal's Confabulation, and is the co-author of Montreal Murmurs, a blog about the curious, the funny and the furious aspects of life in Canada's most mischievous city. She has been featured on CBC's Homerun and All in a Weekend.