In the bitter cold evenings of early November, hundreds have gathered this week in honour François Duchesne, 56, and Suzanne Clermont, 61, who were killed in Old Quebec Saturday night.

The two victims of the attacks that happened in Old Quebec on Halloween night are being remembered as pillars of their communities, who "always hoped for the best."

For two nights in a row, residents, dignitaries and loved ones of François Duchesne and Suzanne Clermont have stood in the cold November wind to light candles and share stories.

Duchesne was honoured in a ceremony at the Musée National des Beaux-Arts du Québec (MNBAQ) on Tuesday.

A candlelight vigil was also held  Monday in front of the home of the second victim, 61-year-old Suzanne Clermont, described by many as "Madame Sourire," the woman who smiles.

Here are some of the memories that were shared.

A string quartet played from inside the MNBAQ as François Duchesne's family stepped out of the Lassonde Pavilion, lit up in green for the occasion.

His older brother, Charles Duchesne, said when François was hired in 2019 as the new director of marketing and communications, he invited his whole family to take a tour of the museum.

"He greeted us on the giant white staircase as if it were his second home," Charles Duchesne told the hundreds of people who gathered after 6 p.m. 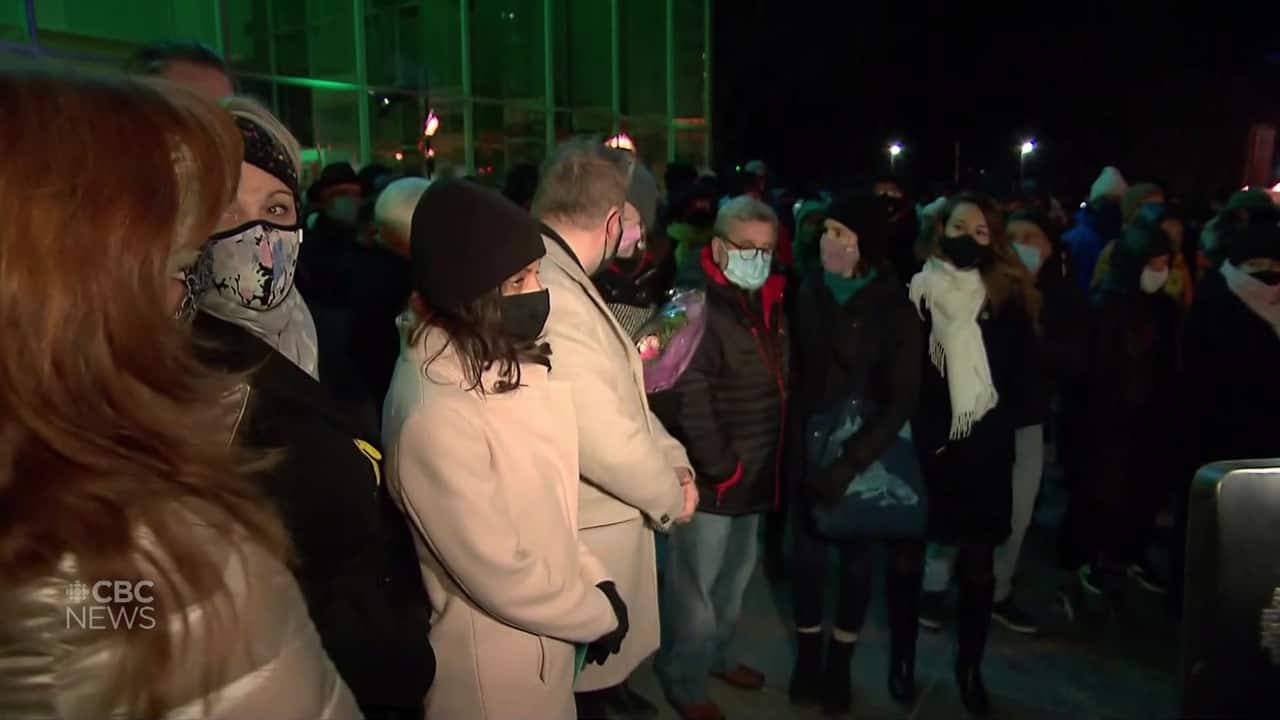 The 56-year-old lived just a short walk from the museum. During his job interview, he told director Jean-Luc-Murray it was his dream job.

"François had an unshakeable optimism," Murray told the crowd. "He never doubted that everything would be OK in the end."

François Duchesne's cousin, Michel, said his cousin and father were both captains on the St. Lawrence River. He called them "affectionate but silent" and stoic men, who rarely "talked about their emotions."

"That silence trickled down from generation to generation, and it is why I never told François how much he changed my life," said Michel Duchesne.

Michel recalled how François and his siblings were camp counsellors and helped young people, listened to them and made them feel important.

"It will be the biggest wake-up call we'll remember from this tragedy, that we need to take care of our peers."

One way François always did that, Michel said, was by advocating for culture.

Jean-Luc Murray said the MBNAQ will rename its art therapy program that helps adults with mental health problems in honour of François Duchesne.

"We want him to be proud of us," said Murray.

Suzanne Clermont lived on the rue des Remparts, a street that winds around Quebec City's fortifications, overlooking the Old Port.

With fewer tourists in Old Quebec this summer, residents took over the street to have 5 à 7 outside, watching the sun set over the horizon.

Suzanne was at the heart of those gatherings.

"She was the queen of the ramparts," said Sophie Pouliot, her daughter-in-law.

Clermont was involved with the local citizens' committee and "was always organizing activities and talking to everyone," said her friend Claire Thériault.

The memorial left in front of Clermont's home has helped neighbours and brought them together, once again, added Thériault.

"We will remember a lady who was always positive and so friendly. She was a wonderful person."

Clermont's spouse, Jacques Fortin, was taken to hospital after the attacks, in shock, and could not be at the ceremony.

But his son, Julien, held up his cell phone to play a recorded message Fortin had left for the assembled.

"My dear Suzanne, no one will ever forget you," Fortin's voice rang out. "I will hold you in my heart forever."

He thanked her for taking care of him for 17 years.

"Je t'aime, Suzanne," Fortin concluded, asking the crowd to take care of the people around them. "Life is so fragile."