A video of a man being beaten by two Quebec police officers has prompted anger in the First Nations community of Unamen Shipu. 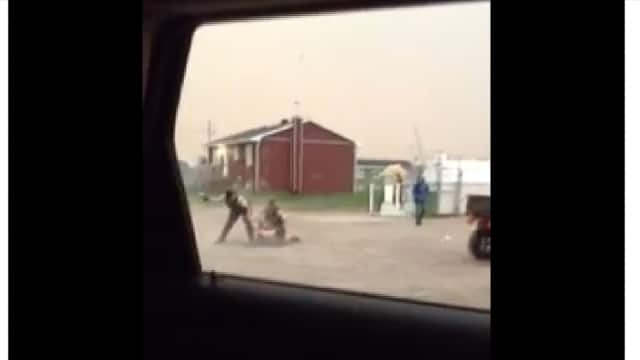 A video of a man being beaten by two Quebec police officers has promoted anger in the First Nations community of Unamen Shipu.

Shot through a car window, the video shows two officers wearing Quebec provincial police uniforms struggle with a man lying on the ground, as they hit him repeatedly.

"It’s unacceptable," said Raymond Bellefleur, the Innu Council Chief of Unamen Shipu, which is in eastern Quebec on the north shore of the St. Lawrence River.

"In my community, we are a peace-loving people," he said. "Our elders are frightened, and our youths and women are terrified by police brutality. That has to stop now."

Relatives have identified the man on the ground as 24-year-old Norbert Mestenapeo.

They say he was left with 12 stitches across his forehead.

Police said the incident began after officers were called to the scene about a dispute on Tuesday.

A spokesperson for the Sûreté du Québec said the police force has a copy of the video and they will be looking into the officers’ behaviour.

First Nations communities like Unamen Shipu have been patrolled by the provincial police force since 2008, when it took over from local police services.

In the wake of the incident, the Assembly of the First Nations of Quebec and Labrador has called for the return of its local police force.

"If this issue of police violence is not looked after or resolved, some of our chiefs have certainly indicated they're looking at the possibility of shutting the door to the SQ," said AFN regional chief Ghislain Picard.

Picard is calling on the federal and provincial governments to follow up on the incident and discuss the restoration of aboriginal policing.
CBC's Journalistic Standards and Practices|About CBC News
now