'I will always fight for you': Valérie Plante sworn in as mayor of Montreal

It's official: Valérie Plante has been sworn in as the mayor of Montreal, becoming the city's 45th mayor and the first woman elected to that role.

It's official: Valérie Plante has been sworn in as mayor of Montreal.

At Thursday afternoon's swearing-in ceremony, hundreds filled the room at Marché Bonsecours in the Old Port to watch Plante and the other elected councillors formally take office.

Before the ceremony kicked off, people gathered in the rain outside Marché Bonsecours awaiting Plante's arrival.
When Plante arrived, a group of supporters serenaded her with their rendition of French singer Edith Piaf's La Vie en Rose, changing the words to "La ville en rose," meaning "city in pink."

Plante, the city's 45th mayor, entered the hall to the sound of bagpipes.

The Buffalo Hat Singers, contemporary Indigenous powwow singers, performed a traditional song in honour of women to kick off the ceremony.

A number of artists, invited by Plante, performed some readings during the event as well.

After signing the golden book, Plante got a standing ovation and prolonged applause.

Once she took the microphone, Plante said she was honoured that 375 years after Jeanne Mance became one of the city's founders, Montreal has now elected its first female mayor.

"This new page of history that we wrote on Nov. 5 is just the beginning of a new adventure. I intend to write the rest of the story with Montrealers, listening to their needs and offering them the best there is to offer," Plante said.

"I may have a new role as mayor, but I will always fight for you. This is my job. This is the mandate that you've given me." 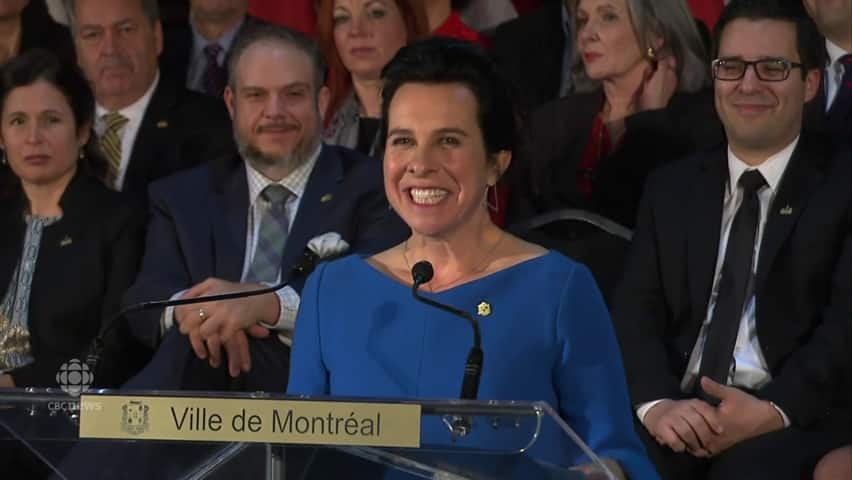 Valérie Plante vows to "fight for you"

3 years agoVideo
0:35
Montreal's 1st female elected mayor says she will stand up for all Montrealers. 0:35

Plante used her speech to highlight the five issues she plans to tackle during her tenure to make sure "Montreal is moving again." She said she will work to offer Montrealers a safer, more accessible, more prosperous and greener city.

"Mobility is the biggest key economic and social factor," she said, alluding to her idea for a new Pink line on Montreal's Metro system.

"We can do it because we have partners in Quebec City and Ottawa who are ready to invest to make it happen," she said.

"I wouldn't put so much emphasis on mobility if it wasn't so important to all Montrealers. I  know what you're going through, all of you, because I live it every day."

Plante said she will work to make roads safer for pedestrians, cyclists and drivers.

"For us, that means longer crossing times for pedestrians. A mother with a 7-year-old child or a grandmother with her grandchild must feel secure crossing at any corner of any street."

But Plante said she's counting on citizens to pitch in.

"All Montrealers are also responsible to make sure that the most vulnerable users of the road are also safe."

Plante called Montreal's housing issue a "major challenge," adding that development projects must include more social housing and that there must be a plan to curb urban sprawl.

"Yes, the cranes are up. We see them every day and we want more of them, but we must ask ourselves, are we doing enough to keep families in Montreal? We need a plan to make sure that what gets designed is what we want and [meets] the needs."

Plante said public services must be made more accessible, and she made a call to public employees to step up.

"Whether it's parks, libraries, snow removal, our front-line services are a priority."

Parity in the executive committee

While Plante tapped Southwest borough mayor-elect Benoit Dorais to be the president of her executive committee, she hasn't yet named the other who will fill the remaining spots.

The first priority, she said Wednesday, is a gender-balanced and diverse executive committee.

"There has to be parity, this is something that's a strong promise and I will honour it," she said. "As well as I want to have diversity in terms of background, in terms of different areas of the city as much as possible."

When it comes to the opposition at city hall, she said she's also open to naming some of them to the executive committee.

"We also mentioned during the campaign that we would like to have people from other parties if it makes sense, if they can complete the team and make it stronger," she said.

At the ceremony, there was a sea of fresh and familiar faces.

Maja Vodanovic, the mayor-elect of Lachine, is said she's excited to be there and eager to get to work.

"For all of us to be together, I think that's going to be amazing," she said.