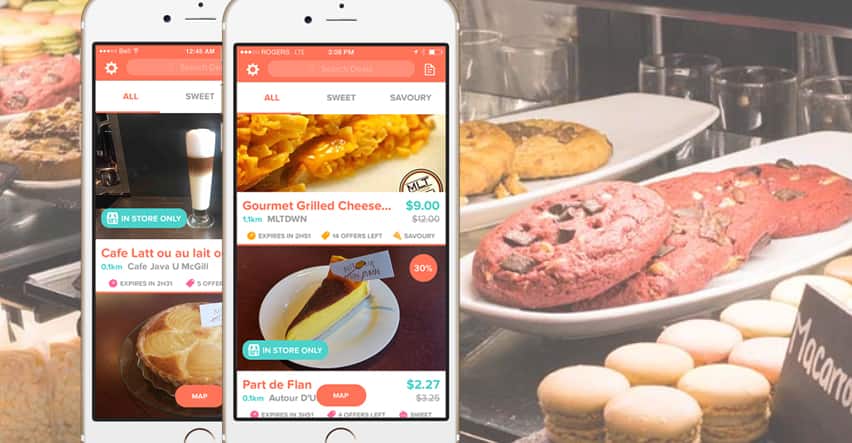 Like many Montrealers, Caroline Pellegrini is a full-fledged foodie.

But she's the kind of foodie that thinks about more than just taking pretty food pictures and posting them on Instagram.

Her aim is to curb food waste in Montreal.

Pellegrini decided she had to do something after seeing how much was going into the garbage at a friend's sushi shop.

"I thought it was really sad and alarming," Pellegrini lamented.

"Piles of sushi boxes were left out at the end of the day at 50 per cent off, and no one was taking advantage of the promotion."

That's what sparked the idea for Ubifood.

The premise of the app is simple: Allow local eateries – bakeries, cafes, fast food shops – to sell their products at a discount, instead of throwing them out at the end of the day or their shelf life.

Through the app, which is currently only available on Apple devices, consumers can see what's on offer nearby and, if required, pay directly through their phone to reserve their chosen goodie before picking it up in the store.

"Everybody benefits. The consumers, retailers, and the planet – all at once," said Pellegrini.

In Canada alone, more than $31 billion worth of food is wasted every year – and that number doesn't include food thrown away at federal institutions nor the environmental cost of dealing with all that food waste.

Around the world, many countries are looking for ways to grapple with the issue.

In 2015, France made headlines when it passed a bill forbidding supermarkets from destroying unsold food, encouraging them to donate it to charities and food banks instead.

Here ​In Montreal, Ubifood is looking to create an accessible way to deal with food waste on a more grassroots level.

So far, it has 20 vendors involved, and Caroline and her team hope to see that number increase to 100 over the next few months.

Watch this week's Our Montreal panel above to learn more about Ubifood and other apps that tackle food waste and encourage ethical eating.

Molly Kohli is the social media editor for CBC Montreal . She also brings her love for all things digital as technology columnist on CBC Montreal's weekend TV show, Our Montreal.