Train engineer in Lac-Mégantic derailment is 'very down'

Tom Harding, the locomotive engineer who parked the train the night before it rolled downhill and derailed in the centre of Lac-Mégantic, is "not doing very well," according to his lawyer. 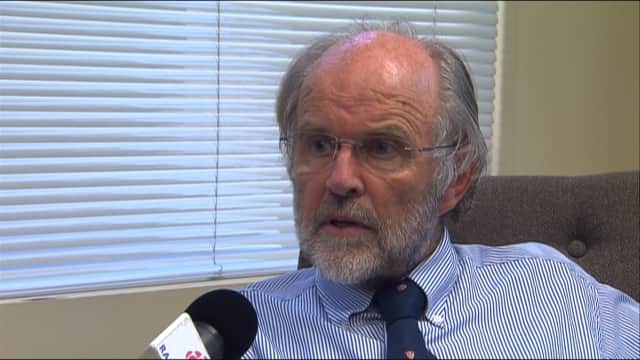 Tom Harding, the locomotive engineer who parked the train the night before it rolled downhill and derailed in the centre of Lac-Mégantic, is "not doing very well," according to his lawyer.

"He’s quite aware of the extent of the tragedy, and the more he’s aware of it, the further he goes down in his morale," lawyer Thomas Walsh told CBC on Tuesday.

Walsh said that Harding is "very down."

The CEO of Rail World Inc., Montreal Maine & Atlantic railway's parent company, has defended his firm's role in the Lac-Mégantic train disaster in the days following the derailment. Edward Burkhardt has previously suggested publicly that the accident was largely due to Harding's failure to set the train's handbrakes.

But Walsh says that Burkhart's comments should be taken with a "grain of salt."

Before the derailment, Harding had been operating the train on his own — a practice that a former engineer calls unsafe.

A former locomotive engineer with the MMA railway, who spoke with CBC's Daybreak on the condition of anonymity, says he left the company because he believed its policies, in particular one that left a single employee in charge of the entire locomotive, could compromise safety.

"It was 10 years of them gambling and rolling the dice, and it finally caught up with them," the former employee said.

"That was the first thought that went through my head. I felt bad for the community. I spent time there. I took rest there. I interacted with those people."

The former employee said he has done the exact route that the train involved in the disaster in Lac-Mégantic took the night it derailed and exploded in the centre of town. He left the company in 2007.

He pointed to a "single-man operation policy," which he said was brought in after the company was bought by MM&A, as one of his primary concerns.

"You have one man by himself on these trains all hours of the day and the night — holidays, weekends," he said.

"There’s no set schedule and your body can’t get used to that … Yeah, it’s your responsibility to try and get some sleep, but you don’t always get rested.

"And then you’re one person, you’re fatigued. You’re hauling hazardous materials through downtowns. Sometimes it’s a struggle. If you have somebody else with you in the cab, you can help each other out."

The former employee described the practice, one he suggested was brought in as a cost-cutting measure, as "a disaster waiting to happen."

"Right when they took over from the previous owner, right from the start they just started cutting," he said.

"They were very assertive. There was a lot of pressure put on the employees to hurry up and get going. Hurry up and get out there and get to work. Just right from the start."

CBC News did not receive a response from Rail World Inc. CEO Edward Burkhardt and other officers of the company when called for comment.

Looking for a cause

In total, the bodies of 38 people have been recovered, and another 13 are still unaccounted for in Lac-Mégantic, more than a week after the derailment.

The Transportation Safety Board of Canada, one of many agencies investigating the crash, has said that its initial findings show that the unmanned train rolled down the hill from where it was parked in the nearby village of Nantes.

It was travelling well above the approved speed limit when some of its 72 cars derailed, triggering a series of explosions that all but levelled a large segment of the town’s core.

The exact cause of the derailment is still under investigation.

The train’s engineer, Harding, had retired to a hotel in the town for the night when the crash occurred. He reportedly ran to the scene and tried to help.

Harding’s lawyer told CBC his client co-operated fully, answering questions for the police and the TSB for hours after the crash.

While he said he can’t speak to the facts of the case, Walsh said his client is "devastated," and has made himself unavailable, on the lawyer’s advice, to recuperate.

"I suggested he leave Lac-Mégantic to find a quiet, out-of-the-way place where he couldn't be harassed by the media," Walsh told CBC.

He said there have been members of the media 'circling' Harding's home since the incident.

"To be involved in it, whatever your role is and whatever your degree of responsibility, the context is that it is an incident that is so extraordinary and so tragic for so many people, he’s just down completely," Walsh said.

"Even the people who are sifting through the ashes right now, it has a terrible effect on them, so you can imagine someone who was involved in the incident as a conductor, how they must feel and all the questions they must be asking themselves."

The former MMA employee who spoke to CBC said he didn’t know Harding well, but had worked with him in the past.

He described Harding as a "veteran" when the former employee joined the company in 1998.

"He was highly regarded by his fellow workers and he was looked upon highly as an experienced engineer and a good one," he said.

"I can imagine the feeling he had. He spent time in that community. He interacted with people. He knew them by name. He’d see them on the street and the grocery store when he’d stop and get stuff for his lunches and whatnot. I just … I would think that he would do anything he could to try and help."

The former employee said he didn’t raise his concerns about the one-man operation issues with the company when he worked there.

An American, he said he did write to his congressman, but received a letter in return expressing what he described as "lip service."

He emphasized his belief that company policies — enabled by lax regulations and insufficient pressure from labour unions — were to blame for the tragedy in Lac-Mégantic.

"The railroad has been there for 100 years, and they didn’t have a disaster of this magnitude until Mr. Burkhardt came and decided to institute his policies with the single-man operation," he said.

"So, shame on the government, shame on the unions for allowing this to happen. I think that the people will probably figure this all out.

"Maybe if they get someone in there who wants to run trains through the proper way, safely, they can persuade the people that it’s not necessarily a bad thing."