Taxi drivers upset with the Quebec government's proposed law aimed at deregulating the industry are staging protests across the province, slowing traffic and forcing riders to find other means of transportation.

'We don't want to be Uber, you know,' taxi driver says

Quebecers hoping to call a taxi today are mostly out of luck as drivers across the province continue their day of protest against the provincial government's proposed law to deregulate the taxi industry.

Here is the latest on the situation:

"People need to understand something: The government created this," said George Boussios, president of Champlain Taxi and the spokesperson for Taxis du Grand Montréal, an association of Montreal taxi companies.

"We bought our permits in good faith through a system that the government created."

If passed, Bill 17 would abolish those taxi permits while removing territorial restrictions and imposing a single set of requirements on all operators.

Taxi drivers argue the law would bankrupt an industry already struggling under the weight of competing ride-hailing services.

Drivers say they are most concerned about what is going to happen to their permits.

Hassan Hachem remortgaged his house to buy his taxi permit for more than $150,000. He's worried he won't be able to afford his mortgage payments if the new law is approved.

Driver Hassan Hachem remortagaged his house to buy his taxi permit, which cost over $150,000. Now he’s worried he won’t be able to afford his mortgage if the new CAQ taxi bill goes through. <a href="https://t.co/7BrmvIh5n3">pic.twitter.com/7BrmvIh5n3</a>

Costa Kouremenos forked over $210,000 for his permit 10 years ago. The Montreal taxi driver has been picking up fares in the city for more than two decades, but he still owes $30,000 for that permit.

"It's just not right what's going on with this government," he told Daybreak on Monday. "It's absolutely wrong what they're doing."

He hit the streets Monday, protesting alongside fellow drivers who paraded slowly down busy highways including the 720, 40 and 15. There were similar protests across the province.

In Montreal, there were some traffic slowdowns but, at the airport, the taxi queues were empty — travellers either grabbed an Uber or hailed one of the taxi drivers that was shrugging off the protest.

In the Quebec City region, a noisy prepossession of taxis converged on the National Assembly.

No line-up for taxis at the Montreal airport today. They’re on strike, though someone at the taxi stand told me there are a handful of drivers who still showed up to work today. <a href="https://t.co/F1bgSMrRrP">pic.twitter.com/F1bgSMrRrP</a>

In Sherbrooke, the protest was a bit quieter. With not much competition from Uber, drivers there have decided they don't want to disrupt customers' lives as much and instead decided to strike only from 9:30 a.m. to 11:30 a.m.

Watch | Taxi driver talks about why he is protesting the proposed law: 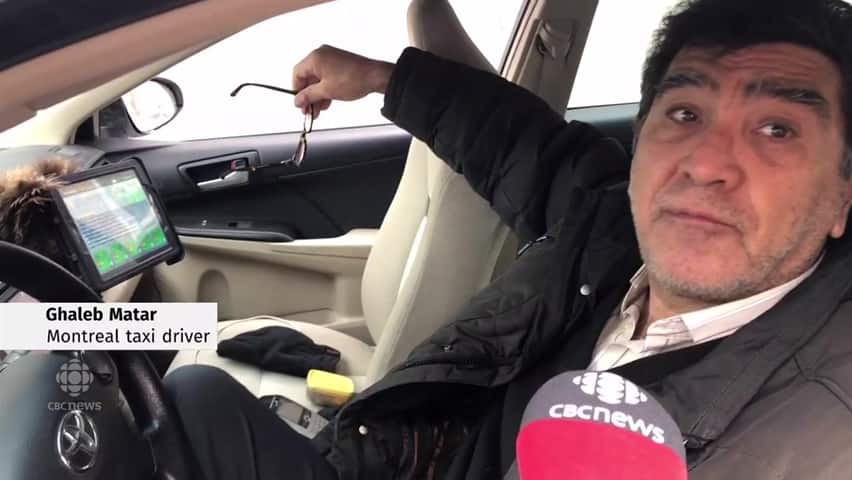 2 years agoVideo
0:27
Taxi drivers upset with the Quebec government's proposed law aimed at deregulating the industry are staging protests across the province this morning. 0:27

Bonnardel has said the government aims to modernize the taxi industry.

"It's their right not to provide service, but the dialogue will remain open with the industry to make an effective and respectful transition," the minister's office said Monday.

"We find it unfortunate that taxi drivers are putting off their customers, especially since a meeting is scheduled tomorrow between the minister and the industry representatives to discuss the bill and the compensation program."

With files from Kate McKenna, CBC Montreal's Daybreak and Radio-Canada