Elected officials do not have the right to recite prayers at municipal council meetings, the Supreme Court of Canada has ruled in a case involving the mayor of Saguenay, Que. 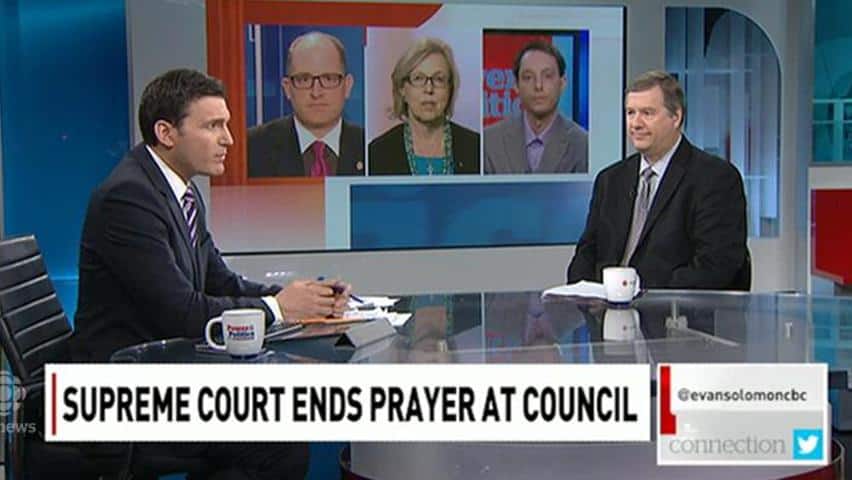 The Supreme Court of Canada has ruled the municipal council in the Quebec town of Saguenay cannot open its meetings with a prayer.

In a unanimous decision today, the country's top court said reciting a Catholic prayer at council meetings infringes on freedom of conscience and religion.

The ruling puts an end to an eight-year legal battle that began with a complaint filed by atheist Alain Simoneau and a secular-rights organization against Saguenay Mayor Jean Tremblay.

The court ordered the City of Saguenay and the mayor to stop the prayers. It also ordered the city and Tremblay to pay Simoneau a total of $33,200 in compensatory damages, punitive damages and costs.

The Supreme Court did not rule out the presence of religious symbols, because it decided to limit the scope of its investigation to prayer only.

In 2011, Quebec's human rights tribunal ordered an end to prayers, demanded that a crucifix in the city council chamber be removed and awarded damages to Simoneau.

But the outspoken mayor fought back, raising money from supporters through the city's website. Tremblay said it was a battle for Quebec's Roman Catholic heritage.

The Quebec Court of Appeal overturned the tribunal's decision in 2013.

The appeals court expressed some reservations about religious symbols in the council chamber, but concluded the city imposed no religious views on its citizens.

It ruled reciting a prayer does not violate the religious neutrality of the city and if the recitation interfered with Simoneau's moral values, the interference was trivial.

The Supreme Court of Canada agreed to hear the case last year.

State must be neutral, court rules

In 2008, city officials initially changed the prayer to one it deemed more neutral and delayed the opening of council by two minutes to allow citizens a window to return follow the reciting.

The Supreme Court said Canadian society has evolved and given rise to a "concept of neutrality according to which the state must not interfere in religion and beliefs."

"The state must instead remain neutral in this regard," the judgment said.

"When all is said and done, the state's duty to protect every person's freedom of conscience and religion means that it may not use its powers in such a way as to promote the participation of certain believers or non-believers in public life to the detriment of others."

Some end prayers after ruling

Tremblay declined a request for an interview Wednesday. He is expected to hold a news conference Thursday morning at city hall.

A Quebec secular lobbying group called the Mouvement laïque québécois —﻿ one of the groups that brought the case before the Supreme Court — said it is thrilled with the decision.

"We are very happy, especially since it was a unanimous decision. So we couldn't ask for more," said the group's lawyer, Luc Alarie.

"A public institution is open to everyone and it's not the place to hold public worship, so I think the message is very clear from the Supreme Court," Alarie said.

In Ottawa, Mayor Jim Watson replaced the prayer with a moment of silence — even though he said the prayer councillors have been reciting for years was non-denominational.

"I always thought that our prayer was very respectful of all religions and cultures. But the court has ruled and we'll take the ruling seriously. The alternative I believe would make some sense is to offer, as we did today, a moment of personal reflection and people can pray themselves personally and privately," Watson said.