Spectacular images of a snowy owl in flight have been captured by Transport Quebec's traffic camera along Montreal's Highway 40.

White and black-spotted bird spreads its wings against snowy backdrop

Spectacular images of a snowy owl in flight have been captured by Transport Quebec's traffic camera along Montreal's Highway 40.

The images were captured on Jan. 3 by a traffic camera at Highway 40 and Sources Boulevard. 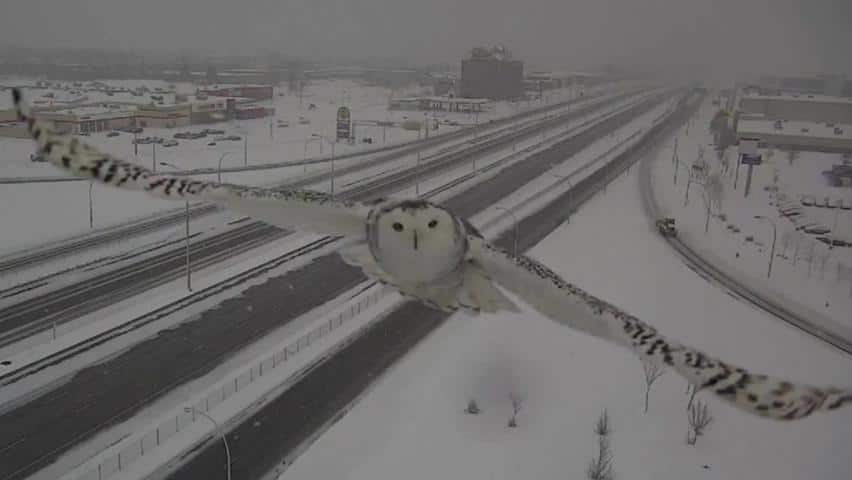 5 years agoVideo
0:25
The spectacular image of a snowy owl in flight has been captured by Transport Quebec's traffic camera along Montreal's Highway 40. 0:25

According to Barbara Frei, the director of the McGill Bird Observatory, this young female was probably looking for a place to perch.

"I think they are attracted specifically to the highway because it has open, grassy fields nearby which is perfect for hunting their favourite prey, which is small rodents," she said.

"They like to get a good lay of the land and the high lamp posts or other posts that they can perch on while hunting just suits them perfectly."

Frei says snowy owls breed north of the Arctic Circle, where they hunt in the summer.

"They'll migrate to their 'winter vacation,' which can be all the way down to southern Canada, in the Montreal region or places in Ontario."