Jay Turnbull's lack of medical training became painfully obvious when he visited the Shriners Hospital's new pediatric simulation centre at the Glen site and tried out his skills on Jose.

'In the operating room, there's no margin for error,' says medical director on why at his centre, error's OK 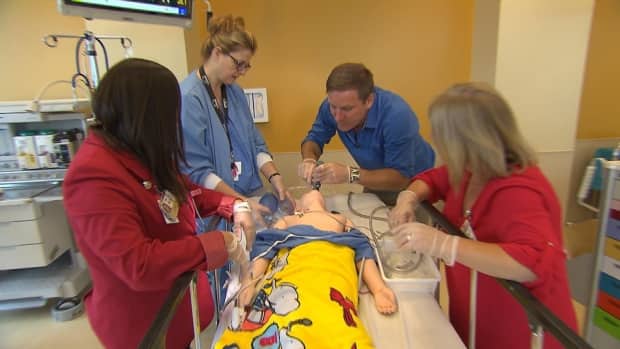 Simulation in the Shriners OR

4 years ago
0:39
CBC reporter Jay Turnbull attempts to intubate a dummy at the Montreal Shriners Hospital. 0:39

There are definitely some perks to being a journalist, among them knowing that I am unlikely to ever be directly responsible for saving someone's life.

That's good news for me – and even better news for anyone who might have depended, hypothetically, on my care.

This became painfully obvious at the Shriners Hospital Wednesday as I held poor little Jose's rubbery head in my hands as he struggled to breathe.

Health professionals have been poking and prodding Jose for several weeks, doing their best to save him from one ailment or another. He's been lying in a bed at the Shriners' new pediatric simulation centre at the Glen site.

Jose is eight years old, and real doctors at the hospital tell me the patient is either a boy or a girl, leaving me to decide the gender. (I chose boy).

I guess it's important to point out that Jose is, first and foremost, a mannequin. No matter how badly I screwed up, I really couldn't have made his situation worse.

When I got to Jose, he was having problems breathing, and the nurses showed me how to perform an intubation procedure: Basically, that means shoving a tube down the poor little guy's throat and pumping air into his lungs.

Not only did my procedure not work, but I'm sure I would have broken several of his teeth.

Doctors and nurses can practise their technique for all sorts of procedures at the simulation centre –  and not just on Jose.

"It allows us, in a very controlled fashion, to teach health professionals to perform certain tasks and skills," said Jean Ouellet, the centre's medical director.

"In the operating room there is no margin of error," he said. "If you do an error, then there is an immediate consequence for the patient."

Ouellet said at the simulation centre, on the other hand, "we actually encourage [staff] to not only perform and do stuff, but you acknowledge that there's an error, you understand why you've made that error, and then you repeat until you don't make that error."

I acknowledge that I made errors.