A Montreal police officer is being accused of using excessive force during an altercation with staff at a Plateau Mont-Royal elementary school who say they were both put in handcuffs and one pepper-sprayed.

Teacher and janitor say they were handcuffed, one pepper-sprayed in altercation with officer who ran red light 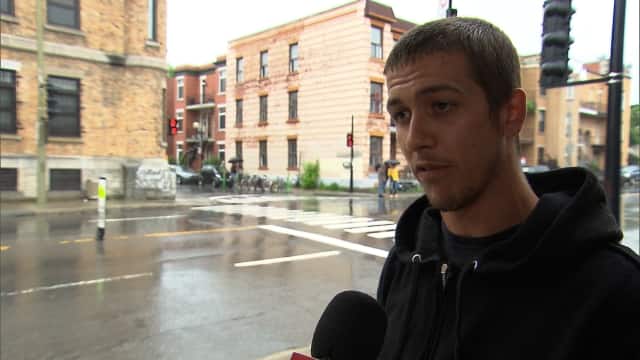 6 years ago
2:02
Two elementary school staff members are accusing a Montreal police officer of using excessive force in an altercation with them 2:02

A Montreal police officer is being accused of using excessive force during an altercation with two staff members of a Plateau Mont-Royal elementary school who say they were both put in handcuffs and one was pepper-sprayed.

Carl Cadieux, the janitor at École au Pied-de-la-Montagne, said the incident began on Wednesday around 5 p.m. ET with the officer running a red light in front of the school at the corner of Des Pins and Henri-Julien avenues without turning on his flashing lights.

He pepper-sprayed me not even two inches from my face.- Nadia Lessard, teacher

Cadieux says there were children waiting to cross at the intersection, and he yelled out for the officer to be more careful.

The officer then allegedly returned to confront Cadieux, who says he was handcuffed and roughly pressed up against the squad car in the process.

Teacher Nadia Lessard then intervened and told the officer to let Cadieux go.

“[Cadieux] was yelling out because it hurt, and so I said, ‘Let him go’ louder and touched the officer’s arm,” she told CBC News.

At that point, the officer turned on Lessard, who said he put his hand to her throat and pepper-sprayed her in the face.

“He pepper-sprayed me not even two inches from my face and after then I couldn’t see anything,” she said.

Lessard said she was then handcuffed and put in another squad car that had arrived on the scene.

She said the pepper-spray was painful, and she couldn’t open her eyes for nearly an hour afterwards.

The teacher is now facing charges of obstructing justice. Cadieux was not charged.

Cmdr. Ian Lafrenière of the Montreal police said early information seems to indicate that the incident started in earnest when an officer gave chase to a speeding blue van on Wednesday late afternoon.

Lafrenière said a woman called 911 after she was nearly hit by the van. A nearby police cruiser responded to the call and pursued the van, making a U-turn on Des Pins Ave.

"What happened exactly, I don’t know at this moment. That’s the reason why I’m not comfortable to tell you that the officer had done something right or wrong. It’s impossible. We have to know both sides of the story to make a decision," Lafrenière said.

He added that contrary to some messages he saw online relating to this event, people can lodge complaints with the police ethics committee.

Lafrenière also said that people can call 911 to report what they believe to be dangerous police behaviour, and that the commanding officer has a duty to call them back to explain what happened.

Dave Miller’s daughter attends the school and he witnessed the incident.

He told CBC News that it left him feeling troubled and unsafe.

“I’m paying their salaries with my tax money and then I see people like that,” he said.

Miller said other police at the scene seemed just as shocked by the incident, which left many children in tears.

“The teacher just completely blind and a bunch of cops who looked as stunned as everybody else, quite frankly, at what their colleague was doing and a dozen children bawling their eyes out," he said.

Cadieux said the support he’s been getting from the students is a comfort.

“It makes me feel better because the situation in front of parents, children, I don’t like it,” he said.

Both Lessard and Cadieux filed official complaints with the police ethics committee today.