A recording from Saint-Hubert air traffic control offers insight into the moments leading up to the mid-air crash of two planes over a suburban shopping centre.

Airport near Montreal was trying to warn pilot of nearby plane

Moments before two small airplanes collided with each other in the skies above a suburban shopping centre, air traffic control at Saint-Hubert airport, near Montreal, was trying desperately to warn one of the pilots of nearby traffic.

"Papa November Papa, are you listening?" an air traffic controller is heard saying on a recording of the communications between the airport and planes in the area.

The controller is referring to call sign GPNP, a Cessna 152 piloted by a 23-year-old trainee with Cargair, a flight school based at the small airport roughly 15 kilometres east of downtown Montreal.

Several minutes before the crash, air traffic control is heard asking the pilot of GPNP to maintain a given altitude because of other planes nearby.

Around 1 p.m. Friday another Cessna 152 registered to the school, call sign FGOI, was taking off from the airport.

It was piloted by a 21-year-old Cargair student, who pointed his craft eastwards towards the Promenades Saint-Bruno shopping centre. Air traffic radioed GPNP to warn him that FGOI was approaching from his left.

The warning is repeated when there is no response from the cockpit of GPNP.

"Papa November Papa, are you listening?" air traffic control says once, before repeating the question when there is still no answer.

'It was too late'

From the ground, witnesses described seeing one plane shear the wing off the other.

"I saw them hit and a wing came off one of the planes, which started to spiral, and the other plane crashed," Carol Pelchat told CBC News on Friday.

FGOI rocketed downwards, its crumpled fuselage coming to rest in the parking lot of the shopping centre, not far from a Sears and a popular burger joint.

Pelchat, a nurse, went to help the 21-year-old pilot. Police at the scene told her "it was too late," and that he was already dead. 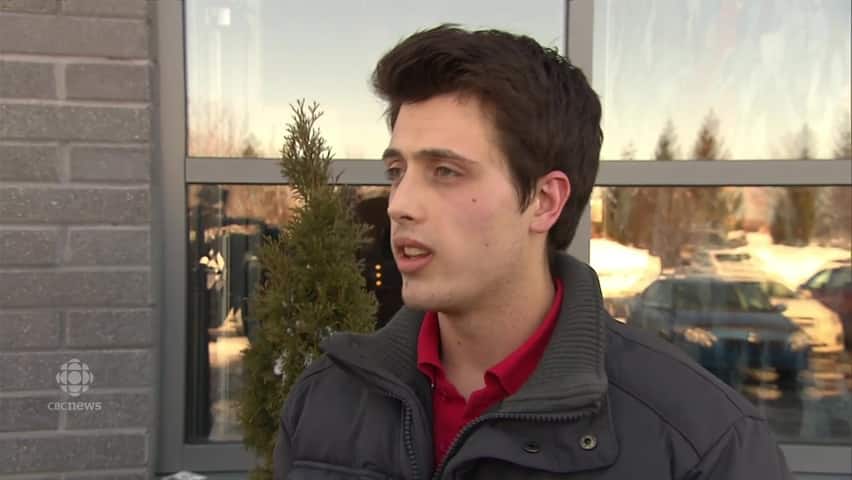 'I saw him fall towards the ground': Eyewitness describes Saint-Bruno plane crash

4 years ago
0:47
Jonathan Littler, 21, was working at a Canadian Tire in Saint-Bruno when one of the two planes landed in the mall's parking lot. He shares what he saw. 0:47

The 23-year-old pilot of GPNP was more fortunate. His plane landed on the roof of the shopping centre, which was covered in a thick sheet of snow following a major storm earlier this week.

Investigators from the Transportation Safety Board arrived on the scene Friday evening. They will send the wreckage of the two planes back to labs in Ottawa in an effort to piece together what happened.

Daniel Adams, owner of Cargair, said both pilots involved in the crash were from China, and were among the 150 Chinese students the school helps train every year.

Adams also suggested that the perfect flying conditions on Friday meant there was likely a lot of air traffic around the airport. That may have crowded the communication channels between air traffic control and the pilots.

"Did the pilot clearly hear the communication [from the tower]? Were there two transmissions at the same time?" he said.

"When there is a high density of flights ... it can happen that there is a certain congestion in terms of the communications. But generally everything works fine. Pilots are trained for that type of scenario, as are the air traffic controllers."

With files from Radio-Canada and La Presse Canadienne