Round 2 in the Plante vs. Coderre debate: Rivals clash over dogs, taxes and transit

The thinly veiled animosity between Montreal's two leading mayoral candidates was on full display during the fast-paced debate Monday night in which policy disagreements often devolved into mutual frustration.

English-language debate was the final head-to-head clash before Nov. 5 election

The thinly veiled animosity between Montreal's two leading mayoral candidates was on full display during the fast-paced debate Monday night in which policy disagreements often devolved into mutual frustration.

Incumbent Denis Coderre and Valérie Plante each sought to throw the other off-balance with one-liners and interruptions in a scrappy battle to claim momentum down the home stretch of the campaign. Voters head to the polls on Nov. 5.

The evening began with the rivals explaining, in turn, their proposals for improving road congestion and public transit services.

As he did in last week's French-language debate, Coderre challenged Plante on her promise to build a new Metro line from Montreal North to Lachine. The Projet Montréal leader has estimated the line will cost $6 billion.

Plante replied by accusing Coderre of being overly cynical and failing to grasp the economic and social benefits of her so-called Pink line.

"What we're seeing right now is a lack of vision," she said. "It would open up neighbourhoods." 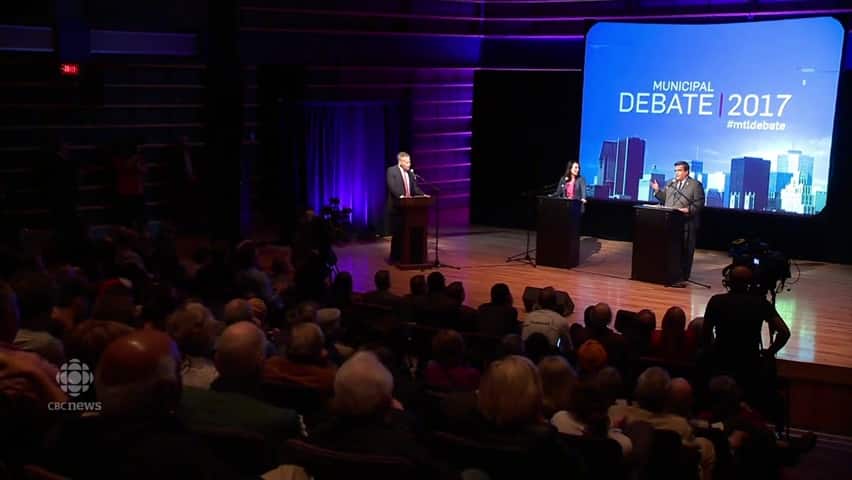 It was Coderre's turn to be placed on the defensive when the debate turned to his controversial pit bull ban, passed last year in the wake of the mauling death of a Pointe-aux-Trembles woman.

"We don't hate dogs, but we chose to put public safety first," he said.

"It has to be [an] animal ownership approach," Plante said, adding that a Projet administration would model its approach to dangerous dogs after Calgary's bylaws.

"I'm hearing a lot of this from the American lobby," Coderre said. Plante cut him short, asking if he considered the SPCA a lobby group. "That's part of the lobby too," Coderre replied.

"I find it very terrible to call the SPCA a lobby. They've been working for the city," Plante said, ignoring Coderre as he called out "lobby, again" during her answer.

The middle frames of the debate saw exchanges over issues where the positions of the candidates are already well-known, including the Formula E race and public money for a new baseball stadium.

Plante accused Coderre's administration of lacking transparency in its spending on Montreal's 375th anniversary celebrations, and called again for him to release sales figures for the Formula E race, which cost $24 million in city money.

Coderre defended the anniversary spending, which media reports have pegged at $1 billion. He argued that most of the funds set aside for the celebrations were spent on infrastructure projects.

As he has since the Formula E race was held, Coderre declined to answer questions about how many tickets were sold, insisting the figures will be released later and that the race's success should be measured over several years.

But when the moderator Leslie Roberts raised the topic of affordable housing, the two city hall contenders outlined opposing views on a foreign buyers' tax, an issue little discussed in the campaign thus far.

Plante endorsed the idea of the tax, which has been implemented in the red-hot housing markets of Vancouver and Toronto in an effort to calm real-estate speculation.

"We don't need it. There is no real estate bubble," Coderre said. He added that such a tax would scare away foreign investors.

It was in the final stages of the debate that the candidates began to show their hostility for each other other more openly.

Though both Coderre and Plante have nearly identical positions on Quebec's newly-passed law forcing women to unveil while receiving public services — both oppose it — they clashed over the purity of each other's motives.

Coderre claimed that Plante had flip-flopped on her position on Bill 62. He seemed to be referring to Plante having said, last week, in English, that she supports the principle of the bill. She later said she meant the principle of state neutrality, which the bill ostensibly seeks to uphold.

In her reply, Plante offered an olive branch of sorts, telling Coderre they should be working together to oppose the legislation and force Quebec to rewrite the law.

"Nice try," he quipped, repeating that he had been opposed to the legislation from the outset. Plante, who worked with women's groups before entering politics, did not take the comment in stride.

"Mr. Coderre, I have no lessons to take from you," she said. "I think it's sad you're trying to mark points with this."

The evening had a bizarre denouement when the two candidates were given the chance to ask each other a question.

Coderre asked Plante whether she supported the boycott, divestment and sanctions (BDS) movement, which seeks to pressure Israel over Jewish settlements in occupied territories.

In a rambling answer, Plante said she did not support BDS and attempted to criticize Coderre for visiting Tehran. Her own question sought to know whether Coderre would stay in municipal politics if he lost the election.