Canadians know the story well — The Hockey Sweater, by Roch Carrier, has been a staple of Great White North culture since it was first published as an oral essay on CBC Radio in 1979. Now, it's a musical. 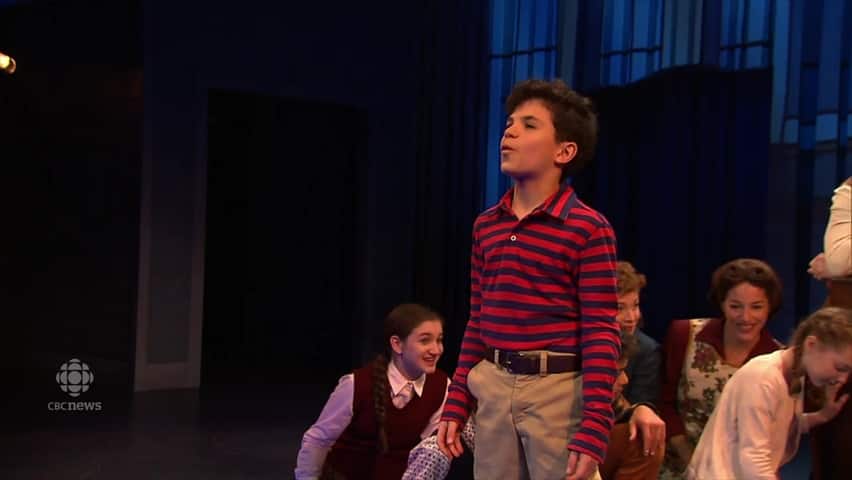 The Hockey Sweater: A Musical

3 years ago
0:50
The Hockey Sweater, Roch Carrier's classic children's book about a boy who wants a Montreal Canadiens sweater but gets a Toronto Maple Leafs one instead, has been turned into a musical. 0:50

In the winter of 1946, a young boy in Sainte-Justine, Que. was nauseated.

The reason? Roch Carrier's mail-order Montreal Canadiens sweater, complete with Maurice "The Rocket" Richard's iconic No. 9, had been replaced by what he considered to be the worst possible thing in the world: a blue and white Toronto Maple Leafs sweater.

Canadians know the story well — The Hockey Sweater, by Carrier, has been a staple of Great White North culture since it was first published as an oral essay on CBC Radio in 1979.

Since then, it has been churned out in many different ways — an illustrated version with artwork by Sheldon Cohen stole the hearts of Canadians, and the National Film Board of Canada commissioned an animated version in English and French.

Now the classic story is being given new life in the form of a musical — and little Roch, who is now 80 years old and a recipient of the Order of Canada, has been alongside the production every step of the way.

"We have an open door policy for (Carrier)," said Lisa Rubin, the driving force behind the original musical, and artistic director at Montreal's Segal Centre.

"He knows he's welcome anytime in the rehearsal room."

The play premieres tonight at Segal Centre and, according to Rubin, its creation was inspired by Montreal's 375th celebrations.

"What perfect timing to do it in honour of Montreal's anniversary, because it does feel like our story," Rubin said. "Especially in Montreal, this is a beloved classic."

Using The Hockey Sweater as 'a diving board'

Although the original story is quite short, the musical expands the world that Carrier created, Rubin said. It explores what happened after Roch got the Leafs sweater, and some of the key people in his life that help him grow and learn life lessons.

"Roch Carrier really … gave the writers the permission to use his story, as he says, as a diving board," Rubin said. "You take it, and you jump off."

Of the production's total 17 actors, eight of them are children — some of the most talented in the country, Rubin said.

They've been "training like athletes" in preparation for the show, and have been learning about hockey, skating, and what life in Sainte-Justine was like in 1946.

"They're going to blow people's minds."

But the actors have only been rehearsing together for two weeks, and opening night is fast approaching.

Sheldon Cohen's illustrations were a large inspiration for the stage production, and Rubin said audience members will notice moments from the children's book in the show's staging.

The production is also working with a Montreal company called Normal, which specializes in video content and scenography.

And what would The Hockey Sweater be without hockey? The children will be skating on stage as part of their performance.

"We're not Disney on Ice, we have a little more elegant touch with that," Rubin said.

With files from CBC's Rebecca Ugolini