Rigaud Mayor Hans Gruenwald Jr. is unapologetic about his town's decision to bring in fines of up to $5,000 for residents who defy the municipal evacuation order.

The mayor of Rigaud is unapologetic about the town's decision to bring in fines of up to $5,000 for residents who defy the municipal evacuation order.

"They are being told something by their community, and they have to listen. And if they don't listen, there are consequences. It's as simple as that," said Hans Gruenwald Jr.

Six neighbourhoods in the town, about 30 kilometres west of the island of Montreal, have been under the order, issued Sunday at the same time the town declared a state of emergency due to severe flooding.

The Sûreté du Québec has been enforcing it all week, visiting homes and ordering people out. About 500 homes are affected and at least 477 people have left their residences, but 19 residents have refused.

In a news release issued Thursday, the town said anyone who ignores the directive and stays in their home, or returns to an area targeted by the order will be fined $1,000 for a first offence. Repeat offenders face fines up to a maximum of $5,000.

Gruenwald Jr. says no one has been fined yet, but several written warnings have been issued. He wouldn't say how long the town will wait before it starts handing out fines.

"These people are very emotional, which I fully understand, but they've been told for the last three weeks what they had to do. We begged them, I tried everything. Maybe I'm going about this the wrong way [but] they're not listening," he said.

The mayor added that while those who refuse to leave are trying to save their homes, if they need saving, there's no guarantee emergency services will be able to get to them.

Residents will only be allowed to return to their homes if there is a "valid reason," Gruenwald said, and only with an SQ escort.

But resident Richard Fournier said he believes the town is being "ridiculous" and too heavy-handed in its approach.

He said officials are preventing people from getting to their homes to check on pets left behind, or open windows to stop the spread of mould.

"I think the fine is stupid. How can you say to a person, 'Nevermind your house, lose your house, if not we're going to give you a fine,'" he said.​

SQ officers have set up checkpoints, where they are questioning motorists to make sure they aren't headed to restricted areas.

Stéphane Caron, who was forced to leave his house earlier this week, said that he hoped to return home since the flood compensation money he applied for through the government is stuck there.

"One of my cheques was sent to my house, but I'm not allowed to go get it," he said, adding that the town's decision put too much pressure on affected residents.

Caron said he'll obey the rules since he can't afford to pay the fines imposed by the town.

Gruenwald Jr. reiterated that he is "at peace" with his decision to sign the evacuation order, despite the criticism he's received.

"If we get through this without fatalities, we will have won," he said. 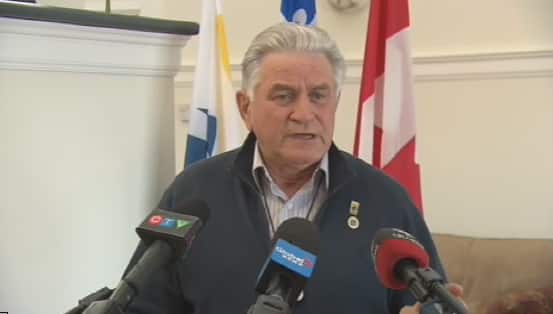 4 years ago
0:46
Rigaud Mayor Hans Gruenwald Jr. says “there will be consequences” for residents who defy the town’s mandatory evacuation order – fines of up to $5,000. 0:46

The town is also advising residents that two information sessions on the province's compensation program will be held next week.

Quebec is in the process of reviewing the program, which covers damage to homes, movable objects, lodging arrangements and any labour residents put in to save or limit damage to their homes.

Right now, the program only covers damage to primary residences or renters, and the maximum amount is $159,208 for damage to a home, not including the amounts for movable objects, lodging arrangements and labour.

The province is strongly urging those who want to make a claim to attend one of the information sessions if they can.