Richard Bergeron says this was his 'final election'

Projet Montréal leader Richard Bergeron announced today he does not plan to run in the next municipal election, but he will stay on as party leader for the next year or two. 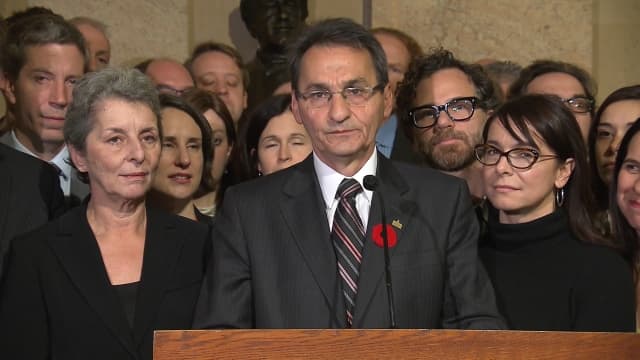 7 years ago
2:47
Projet Montréal's Richard Bergeron says he will not run in another election. 2:47

Projet Montréal leader Richard Bergeron announced today he does not plan to run in the next municipal election, but he will stay on as party leader for the next year or two.

Bergeron said it's his duty to remain in his job long enough to show his new councillors the ropes.

Bergeron went into a period of reflection after his third bid for the mayor's office failed. On Sunday, he came in third place behind Mélanie Joly with 25.52 per cent of the vote.

"Enough is enough," Bergeron said today, surrounded by his team at city hall.

"I had to accept this decision of the population which was very different to accept. It was my last time and it will remain my last time."

Despite Bergeron's failed bid for mayor, his party managed to gain status as the city's official opposition party with a total of 28 seats.

"Of course as a candidate for mayoralty, I feel sad. But as a leader for Projet Montréal I feel very proud ... You know Projet Montreal is far stronger today than it was a few days ago," Bergeron said.

'A lack of elegance from Denis Coderre'

At Wednesday's press conference, Bergeron also addressed the recount in the district of his candidate-designate.

Janine Krieber was selected to step aside to give Bergeron a seat on council if he was not elected mayor.

Mayor-elect Coderre has asked for a judicial recount, a decision Bergeron called unmayor-like.

Bergeron said he won't be able to be at the new city council's swearing in ceremony because of Coderre's recount.

“That’s a lack of elegance from Denis Coderre, not for Mayor Coderre. I hope that he will be Mayor Coderre very soon," he said.