Hèzu Kpowbié says he thought he might be killed two weeks ago when three Repentigny police officers pointed their guns at him in a park near his home.

Hèzu Kpowbié says he thought he might die two weeks ago when three Repentigny police officers pointed their guns at him in a park near his home, as his son watched.

"I honestly thought that I could be killed," said Kpowbié,  42, a digital media worker who is black. "I pulled out my phone and started recording, so if something happened to me, at least people would know what happened."

Kpowbié said he was walking to the park with his eight-year-old son and his son's friend on the afternoon of Sept. 15, when the friend dropped a letter opener he'd had been carrying to fix a toy. Kpowbié picked it up because the child was biking.

When they got to the park, three police officers pulled their guns at him, he said.

Kpowbié used his cellphone to film two minutes and 20 seconds of the encounter with police. The video begins after the incident has already started to unfold: police officers can be seen pointing their guns at him and telling him to get on the ground. 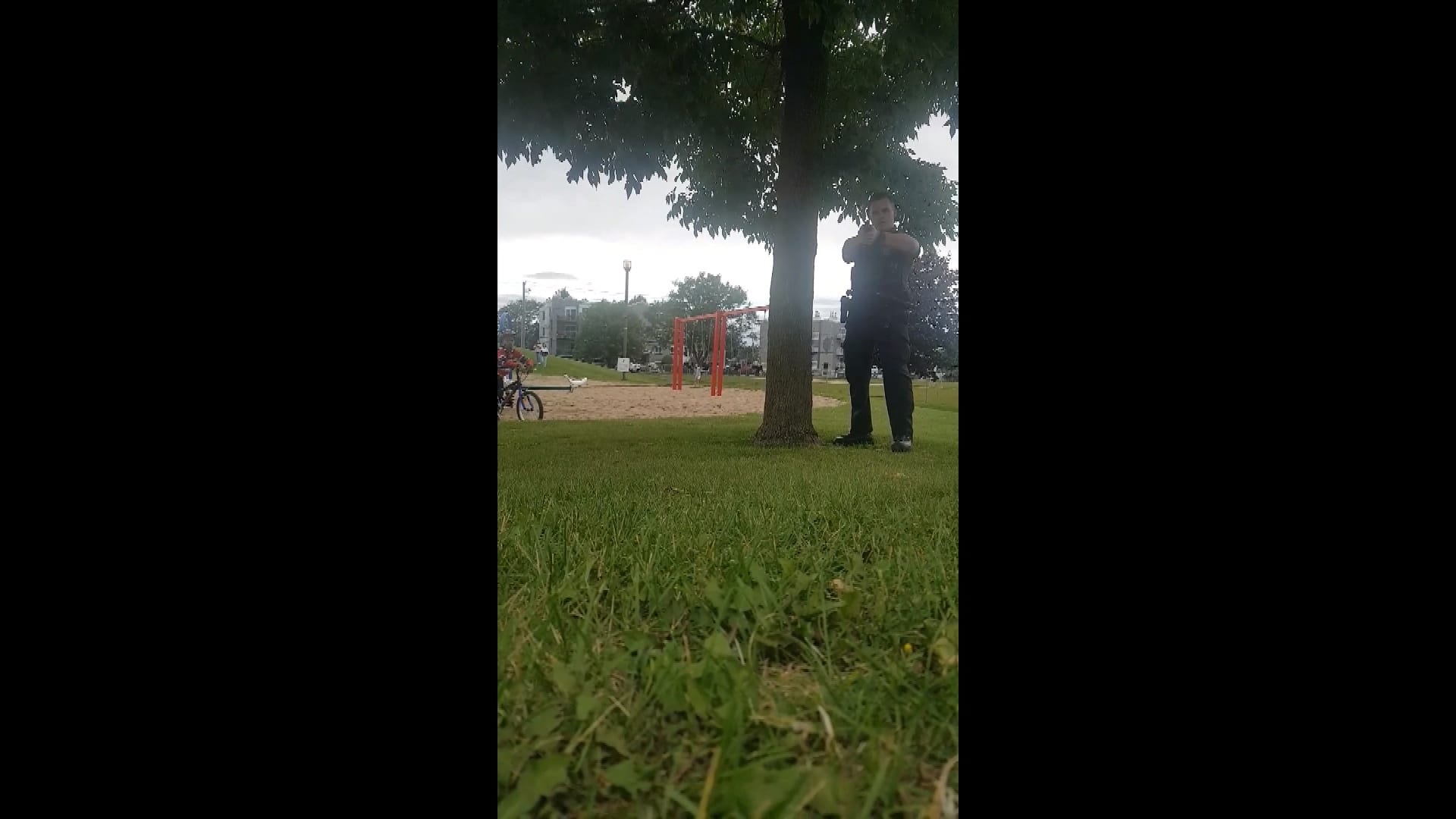 1 year ago
2:21
Hèzu Kpowbié took this cellphone video after police officers drew their guns on him in a Repentigny park on Sept. 15. 2:21

Kpowbié repeatedly asks what he has done wrong before obeying orders to lie down and spread out his arms.

He was then handcuffed and detained in a police cruiser for 30 minutes. Police gave him a $150 ticket for possession of a weapon.

In an interview with CBC Monday, Repentigny police Chief Helen Dion defended the response of the officers involved in the incident.

Dion said police had received a call reporting that someone had seen a man carrying a knife, and because the officers believed Kpowbié was holding a weapon in a park with other people around, it was appropriate for them to draw their guns.

"It is what is [taught] in the École nationale de police, in this case." Dion said.

The priority in cases like these is to ensure the safety of bystanders, she said.

"We don't know what's in the head of the person who's holding the knife. We have a fraction of time to take a decision and make sure we preserve lives."

"I don't blame [the police] for showing up there because someone called them," Kpowbié said. "But what I'm asking is, why were they pointing a weapon at me?"

He said he plans to file complaints with Quebec's police ethics commissioner and the province's human rights commission.

Racial justice advocates at the Center for Research Action on Race Relations (CRARR) say they're also alarmed by the police response.

"This is the worst kind of racial profiling because it involves the use of lethal force," said Alain Babineau, a former RCMP officer who advises CRARR on issues of racial profiling and public safety. "It doesn't get any worse than that. It could have had lethal consequences."

"Since last October we've been getting so many complaints from individuals in the black community — men, in general, of all ages from Repentigny or visiting Repentigny," said Niemi.

Just two months ago, CRARR held a news conference in which four other black men from Repentigny described their encounters with police in which they felt targeted because of their race. The police officer who signed Kpowbié's ticket was also involved in one of those incidents, in 2017, according to CRARR.

In response to those allegations in July, Repentigny's police chief said the force had hired a community liaison officer.

But Niemi says it's clear that isn't working, and the city needs to take a deeper look at what he calls systemic issues in its policing.

Repentigny's police chief said she is sensitive to issues of racial profiling and that the force holds events to "demystify" police work in the community.

Dion said Kpowbié has the opportunity to contest the ticket.

As for Kpowbié, he said his son used to dream of being a police officer and is now having nightmares. And Kpowbié has not yet returned to the park.

"I'd heard in the past that police in Repentigny have a problem with black people, but I never thought that this could happen to me," he said.

"Who would think that you could be walking in a park and have police point a gun at you?"

With files from Verity Stevenson