Céline Dion stood by her husband's open casket for close to seven hours on Thursday, greeting Quebec dignitaries and the public as they filed into the Notre-Dame Basilica in OId Montreal.

Public visitors paid their respects at Notre-Dame Basilica in Old Montreal from 2 p.m. to 9 p.m. 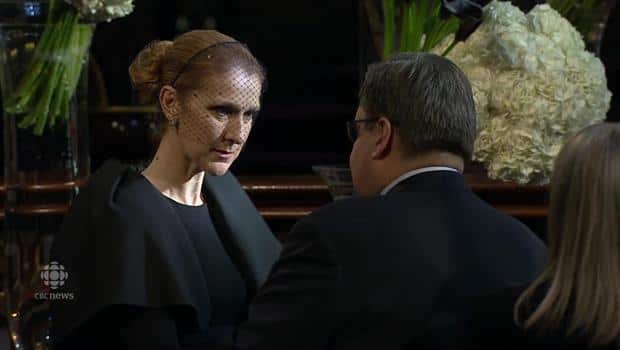 Céline Dion stood by her husband René Angelil's open casket for close to seven hours on Thursday, greeting Quebec dignitaries and the public as they filed into the Notre-Dame Basilica in OId Montreal.

Fans began lining up at 5:45 a.m. ET for a chance to pay their respects to Dion's husband and longtime manager at the basilica.

Dion greeted and embraced public visitors as they filed into the same church where she married Angélil more than two decades ago.

Dion was expected to be at the basilica at the beginning of the visitation and again near the end, but was present at the church for most of the day.

Angélil died of cancer last Thursday at the age of 73. His funeral will take place Friday afternoon.

All members of the public who entered the Notre-Dame Basilica received a program with a message from Dion.

"I understood that my career was in a way his masterpiece," Dion's message read.

"I realized that if he ever left us, I would have to continue without him, for him."

Every fan and friend who attended René Angelil's visitation received this: <a href="https://t.co/ntb8XFraqG">pic.twitter.com/ntb8XFraqG</a>

Montreal Mayor Denis Coderre said the day was a chance to pay homage to a man known for being loyal and generous to Montrealers.

"He was larger than life, but he was also the little boy from Villeray," Coderre said. "He never forgot his roots."

Mimsye Belle is a Montrealer who benefited from Angélil's generosity.

Belle, who has a physical disability, met Angélil when she was working for the entertainment technology company Solotech.

Faced with daunting surgery, she said she received a "substantial amount" in her bank account.

"I was never able to confirm from who it was coming," Belle said, "but I don't have any other rich friends."

"For him, the real generosity is anonymous."

Belle said she can stand more straight today because of Angélil's financial help.

"He changed a lot of people's lives, including my own."

Julia Martin, who has seen Dion perform on three continents and met Angélil several times, travelled from Orange County, Calif., for the visitation.

"I know it's crazy, yes, but it feels right," Martin said of her long-distance trip. "I have to be here."

Martin said when she finally got to express her condolences to Dion, the singer recognized her.

"She said, 'I can't believe you're here today,'" Martin recounted, "I told her I need to be here, there's no doubt about it."

Julia Martin flew from L.A this morning to be here "We need to show support. Rene was always there for the fans." <a href="https://t.co/xtlPRXtryW">pic.twitter.com/xtlPRXtryW</a>

Martin said Dion seemed grateful for the support, but that she made the trip primarily to pay homage to the man who "has treated us with respect throughout the year."

"Every single time [you met Angélil], he makes you feel like you're the most important person in the world," Martin said. "He's such a wonderful man."

Fan Diana Zerbisias waited three hours in the cold to offer her condolences to Dion.

Once in the basilica, Zerbisias said Dion looked beautiful and peaceful as she shook her hand.

Zerbisias said she told Dion "love exists forever," and that she was there for her and her family.

Many fans waited to offer Dion their condolences and words of encouragement.

"I told her I'm a widow for 30 years, and she has to be very strong and have faith in God," said Montreal resident Floreen Paul.

"She said 'OK' and you know, she held me and squeezed me and kissed me when I told her that."

Diane Labrecque, another fan, said she shared a personal story with Dion.

"The way she responded to me was so confident, so beautiful, so generous of herself," Labrecque said. "I was moved."

Fans from all walks of life waited for hours to thank Angélil and Dion for their contributions.

Mamadou Ndoye and Koné Bilali praised Angélil and Dion for their contributions to people around the world.

"There are two words to describe René Angélil," Ndoye said. "Generous and visionary."

1 woman flew in from Cali to be here. These 2 men say René &amp; Céline were so generous, helped many around world. <a href="https://t.co/YFJLOAQkWs">pic.twitter.com/YFJLOAQkWs</a>

Jérémy Gabriel, who became known in Quebec when he sang for the pope in 2006, said he wanted to be at the visitation to support Dion.

Gabriel said the couple gave him his first big break and were great friends to him.