Mountains of recyclable glass have been piling up at recycling depots in and around Montreal, ever since Klareco, aglass processing plant in Longueuil, shut down last spring.

Closure of processing plant leaves glass with no takers 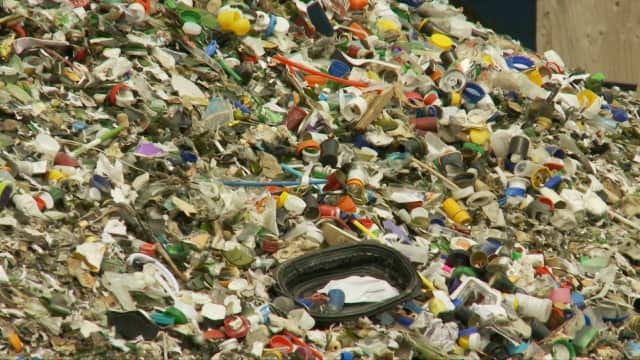 Mountains of recyclable glass have been piling up ever higher at centres in and around Montreal, ever since Klareco, a glass processing plant in Longueuil that prepared about 70 per cent of the glass in Quebec for recycling shut down last spring.

Klareco processed more than 100,000 tonnes of glass in Quebec each year and sent most of it to the U.S., where it's used to make insulation.

Since the plant closed, at one glass-recycling depot alone, in Chateauguay, 8,000 tonnes — or 8 million kilograms — of glass has piled up in the course of a single season.

The situation has environmentalists worried that by the time a solution to the problem is found, the broken shards of glass may have degraded to the point that they won't be recyclable any longer.

Karel Ménard of the Collective Front for the Ecological Handling of Waste says the way to fix this problem is for the province's liquor board, la Société des alcools du Québec (SAQ), to introduce a deposit system.

Ménard says most glass bottles that end up in people's recycling bins are from wine and spirits.

He says Quebec and Manitoba are the only provinces that don't offer that service.