For organizers of recreational leagues like Flag Plus Football founder and CEO Rob Campana, getting back to business took a lot of work and investment.

For organizers of Flag Plus Football, getting back to business took a lot of work and investment

Bobby Sepentgis has played weekly in the Flag Plus Football (FPF) league for more than a decade.

But when his team's shot at the spring league championship was cut short in March due to the outbreak of COVID-19, the father of three wasn't sure when or if he was going to see his teammates again.

"Socializing, seeing friends, that's what the league means to me," Sepentgis said.

This month, like many adult recreational leagues, FPF got back up and running and Sepentgis is catching touchdowns again.

For organizers of recreational leagues like FPF founder and CEO Rob Campana, getting back to business took a lot of work and investment.

He says it required hours of consultations to set up new protocols. He had to buy new equipment for referees, such as contactless whistles, and buy personal protective gear for employees as well as players.

He also had to hire additional staff to clean surfaces more frequently and enforce the new rules.

"We're a small business, but this season wasn't about being as profitable as we can. We just wanted to make sure that we could get back, gain the trust of our players, make sure everybody runs in what they feel is a safe environment," Campana said.

Campana started FPF about 15 years ago with fewer than a dozen teams taking to the field.

In 2019, he had grown the league to more than 3,700 registered players, the biggest league of its kind in Canada.

It's early, but so far his efforts to restart the league appear to have paid off.

For their fall season, he said enrollment only dropped about eight per cent compared to the same period last year.

The league's health and relations co-ordinator, Moe Khan, has the job of making sure the players follow the new rules which includes sanitizing their hands regularly and spacing out on the benches to respect physical distancing.

"These guys are adults. They understand the consequences if we don't respect the rules, the government rules. And if we don't do that, we don't have a football league and there's no recreational leagues across Quebec, for that matter," Khan said.

Campana says the key to keeping his league afloat going forward is to show that it is possible to play again safely.

"I know a lot of people are worried and I'm worried myself," said player Ryan Garber. "I wouldn't come here if I didn't feel safe." 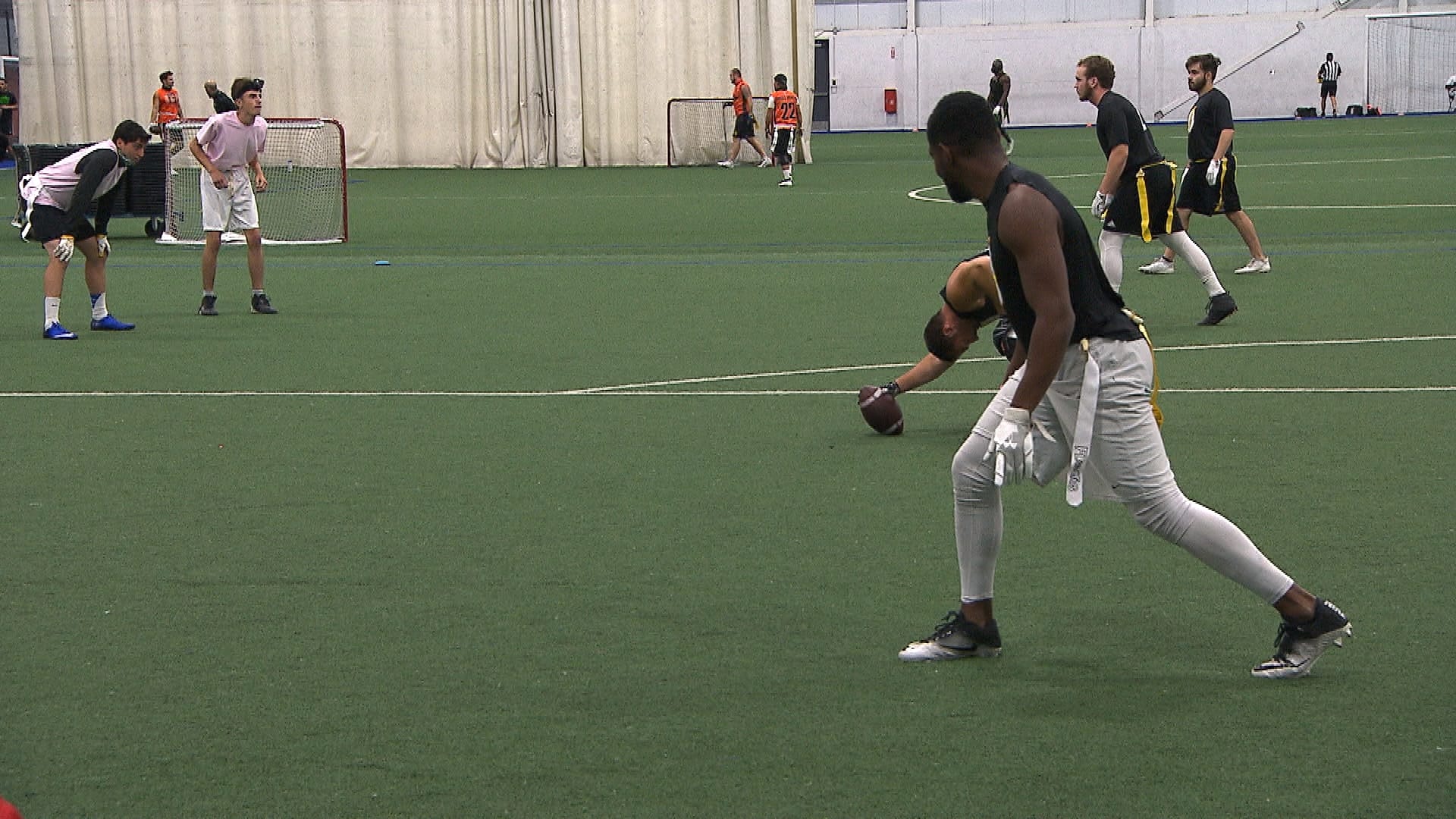 Running a flag football league during a pandemic

2 months ago
1:54
For organizers of recreational leagues like Flag Plus Football founder and CEO Rob Campana, getting back to business took a lot of work and investment. 1:54

Still, the biggest challenge for indoor adult recreational leagues is yet to come. The winter season is traditionally when they see their highest numbers of participating players.

Accommodating as many players as they did in the past might be difficult because the facilities where they play will likely have to operate at a reduced capacity.

But despite the challenges ahead, organizers like Campana say they've learned a lot on how to adjust already and they will be ready for the winter wave of players.