Q&A: Ranee Lee seeks to honour the 'Dark Divas' of jazz who inspired her

Lee is performing at the Montreal International Jazz Festival July 6, and has played a show every edition of the festival since its inception.

She performs at the Montreal International Jazz Festival July 6

Ranee Lee has been an integral part of the Canadian jazz scene since she arrived in Montreal in 1970 from her native Brooklyn, New York.

She was a multi-instrumentalist whose voice seemed to be her most proficient and mellifluous axe. Her albums on Montreal's Justin Time label are considered classics.

Lee is performing at the Montreal International Jazz Festival July 6, and has played a show every edition of the festival since its inception.

Her portrayal of legendary songstress Billie Holiday in the one woman play Lady Day At The Emerson's Bar And Grill at the Montreal supper club Le Dilligence in the '80s was where she really showed both her singing and acting chops.

This year, Lee is set to perform a one-woman musical called Dark Divas which tells the stories of legendary African-American female jazz legends.

The following interview has been edited and condensed for length and clarity.

What brought you to Montreal?

Music. I was contracted to come here and play on several occasions. On the last occasion — which was in 1970 — I was contracted to play at The Bonaventure Hotel and I was a solo act. Previously, I had been touring all over Canada and the United States as a member of a group. I was either the drummer or the bass player and always the singer.

It was ebbing. It was coming back to a place where people were starting to appreciate jazz again. You know jazz is like a recurring cold. It keeps persisting. I think at that time I was doing more Broadway and pop music. But the jazz element was starting to become stronger again. The [Montreal] jazz festival had not begun yet, but the schools like Concordia, [UQAM] and McGill were preparing the young musicians to go out [and play]. There were all sorts of little clubs all over. 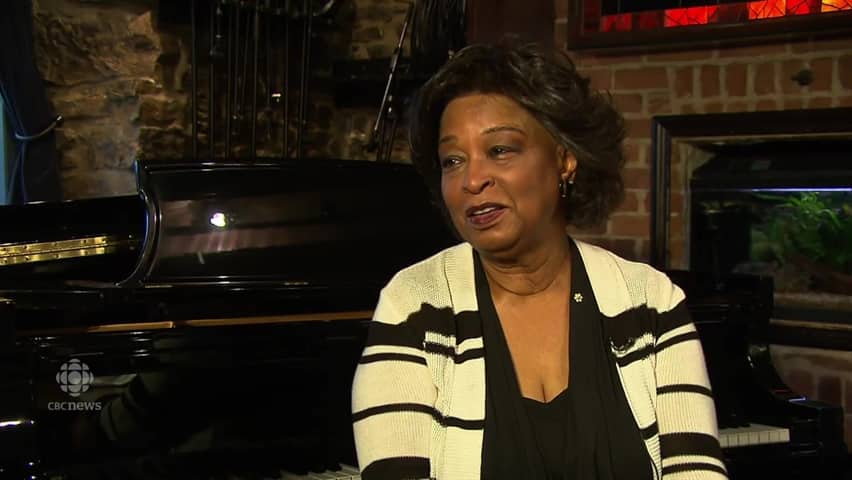 3 years ago
3:03
Jazz musician Ranee Lee sat down with CBC Montreal music columnist Duke Eatmon ahead of her July 6 show. 3:03

What is Dark Divas about?

Lena Horne, Billie Holiday — [they] were part of my youth. I had a brainstorm once at four o'clock in the morning. I wanted to write a play about the women that forged my place in this world at this time. I started from a chronological order from Josephine Baker, Billie Holiday, Lena Horne, Pearl Bailey, Dinah Washington, Sarah Vaughn, Ella Fitzgerald.

There are no words. I've been very fortunate through the years of performance and travelling and associations with everybody from musicians to my husband Richard [Ring] to club owners like Joel [Giberovitch], everybody. I've been given the gift to do what it is that I do and have the support of everybody that helps me through this journey. So it's not my Order, it's our Order of Canada. I've been an accepted daughter to this country and of course to this province. There is just so much in me that is honoured but I am also humbled by it.

Ranee Lee performs Dark Divas July 6 at L'Astral at 6 p.m. with her octet.

With files from CBC's Our Montreal