First Nations leaders in Quebec say they are not surprised Indigenous players at a Quebec City minor hockey tournament last weekend were subjected to racist slurs, and they hope the event will spark conversations about rooting out racism in the sport.

First Nations leaders in Quebec say they are not surprised Indigenous players at a Quebec City minor hockey tournament last weekend were subjected to racist slurs, and they hope the event will spark conversations about rooting out racism in the sport.

Tommy H.J. Neeposh, the manager of the First Nation Elites Bantam AAA team, players and their parents recounted to CBC how players were called "savages" by at least one coach and a number of spectators during a game at the Coupe Challenge Quebec AAA tournament.

After winning a game, the 13- and 14-year-old players were taunted on the ice, as the opposing team's players lined up on the blue line and made tomahawk chopping gestures and mimicked a stereotypical "war cry."

"When you see kids playing well and winning a game, instead of applauding them, you treat them with such disrespect?" asked Huron-Wendat Grand Chief Konrad Sioui incredulously.

"It's so unacceptable, especially from the parents."

Sioui said racist slurs, whether they come from spectators in the stands or players on the ice, shouldn't be trivialized just because they happened during a minor hockey game.

"Perhaps in Quebec there is a group effort that has to be made," Sioui said.

Richard Sévigny, vice-president of the Bulldogs de Québec, the team that organized the tournament, said he found the allegations unfortunate and deplorable, but he insisted there was little he could do. 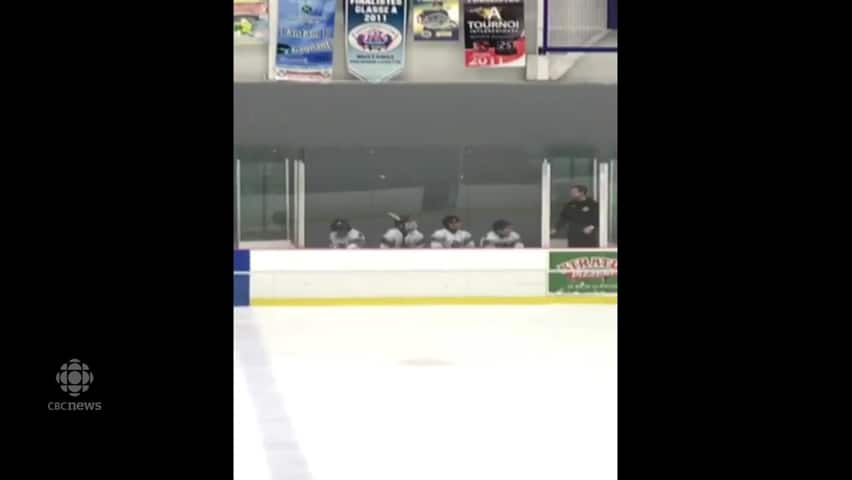 3 years ago
1:23
Tommy H.J. Neeposh, the manager of the First Nations Elite Bantam AAA team, says that his players were subjected to racist taunts and treated unfairly by referees at a recent spring hockey tournament. He broadcast one of the games on Facebook Live, capturing video of multiple Elites players going to the penalty box and one fan yelling a racist taunt. 1:23

"What happens on the ice between young people, we can't control that," Sévigny told CBC.

The former grand chief of the Grand Council of the Crees of Quebec, Matthew Coon Come, tweeted on Friday that he had experienced this kind of racism when he was a young hockey player.

Quebec's Minister responsible for Native Affairs, Geoff Kelley, said it was important to not generalize, but he said "even one isolated incident like that is too many."

"Reconciliation is happening" across Quebec, where communities have shown a greater awareness of their Indigenous population, he said.

"There are very positive signs across Quebec," Kelley said. "But there will be incidents like the one over the weekend at this hockey tournament that [are] unacceptable."

A similar incident in the Abitibi region in 2015 led to sanctions against certain players, and a letter was sent out to members of Hockey Abitibi-Témiscamingue, condemning the racist comments.

"We haven't received any complaints since then, and we made sure everyone was on the same page," said the organization's president, Christian Labbé.

He said he was saddened to hear racist incidents like the ones last weekend were still happening three years after the Abitibi experience.

Ron Marshall, whose son Julien, 14, played with the Elites in the Quebec City tournament, said while he knows players and parents can get riled up during a game, it becomes unacceptable once racism comes into play.

"These kids shouldn't have to carry this around with them," said Marshall, a Mi'kmaq living in Cantley, Que.

Marshall said all those "who don't fit the stereotypical hockey player" mould have experienced racism, and it doesn't seem to be going away.

"We're stuck in a moment in time where there's a group of children getting that bad behaviour from their parents," he said, calling on Hockey Quebec and Hockey Canada to raise awareness around these racial issues.

While Hockey Quebec does have a code of conduct with clear rules proscribing racist behaviour, an off-season tournament like the one in Quebec City doesn't fall under its regulations.

However, Julien Marshall said he witnesses racism all the time: he said he hasn't played in a single game with the Elites, a team made up of the province's top Indigenous players, in which some kind of racist insult isn't thrown around.

"I think it's ridiculous that people say stuff like this still," Julian Marshall said. "I just find it really disturbing and upsetting."

Marshall's next game with the Elites is in Ottawa, as part of Canada Day celebrations.

He said whatever happens, his teammates will keep their heads in the game.

"We're just going to continue on, win some games and have some fun."

With files from Radio-Canada's Pascale Lacombe and Antoine Trépanier