Pauline Marois gets grilled on charter during mall visit

Parti Québécois Leader Pauline Marois was caught off guard over the weekend, when her meet and greet in Boucherville was interrupted by a spontaneous debate on the secular charter. 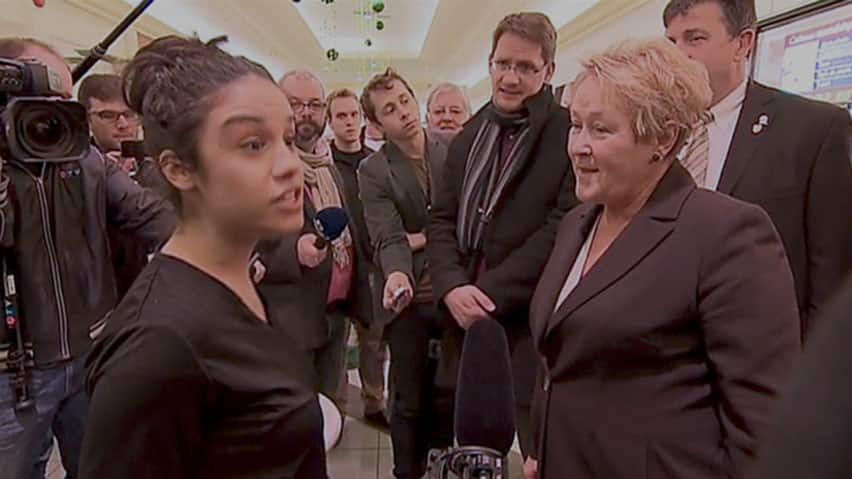 7 years agoVideo
2:20
Watch as a student catches the PQ leader off guard during a campaign stop. 2:20

Parti Québécois Leader Pauline Marois was caught off guard over the weekend, when her meet and greet in Boucherville was interrupted by a spontaneous debate on the secular charter.

Marois was approached by Samar Assoum, a graduate student in international law at the Université de Montréal, as she toured the Promenades Montarville in Boucherville on Saturday.

Assoum, who works at the mall, says she felt compelled to share her views with the PQ leader.

“We have to work together to enrich society and I feel this charter is just dividing Quebecers and it’s not enriching society … I was trying to make this point,” Assoum told CBC’s Daybreak.

The result was a spontaneous public debate between Assoum and Marois about the implications of the proposed secular charter, and its ban on overt religious symbols such as the hijab for public employees.

A video of the interaction shows Assoum caught up in a heated discussion with Marois:

Assoum: “Yes but what if I decide to wear it. You’re infringing on my right to wear the veil.”

Marois: “No, I don’t think so, because you can wear whatever you want, except for in a public role”

Assoum: “Don’t you think it will go against Section One in the Canadian Charter?”

Marois: "We believe that it won’t, we’ve done evaluations."

Assoum: “If you want to reinforce the French language, you will need to encourage immigration from Maghreb [northern Africa] and people there are Muslim. They’re people who work hard, and I think we should respect their rights.”

Marois: "Our platform is very respectful of all religions of the world."

Assoum says she appreciated that Marois took the time to listen to her opinion.

In the end, Assoum and Marois parted with smiles on their faces.

“I think it’s not an easy job to be a politician. I was really nervous. I didn’t expect there would be that many journalists,” Assoum said.