The Opéra de Montréal is set to stage Die Fledermaus on Jan. 26, but tenor Marc Hervieux is refusing to sing during rehearsals, upset by a poster campaign featuring models. 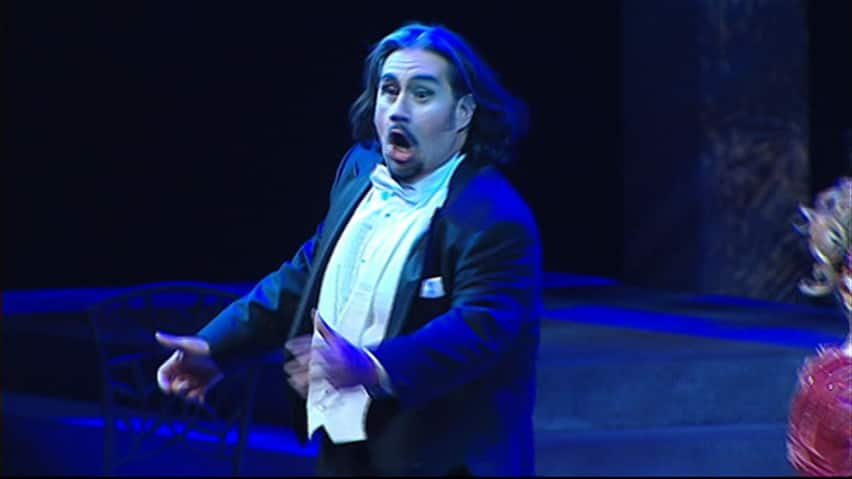 The Opéra de Montréal is set to stage Die Fledermaus on Jan. 26, but the singer the company bills as "the prince of Quebec tenors," Marc Hervieux, is refusing to sing during rehearsals, which began this week.

Hervieux says he is on a "vocal cord strike," upset with the posters advertising Johann Strauss II's Viennese operetta, known in French as La Chauve-Souris and in English as The Bat.

The company's advertising campaign for this season features models instead of performers.

When he refused to sing at rehearsals last Monday, Hervieux said, "Call this guy on the poster to sing."

A synopsis of Die Fledermaus, from the Opéra de Montréal's website:

Sentenced to spend a few days in jail, Gabriel decides to postpone his punishment by first stopping in at Prince Orlovsky’s ball. At the party, he makes eyes at a mysterious Hungarian countess, who is actually his own wife in disguise. Everyone lies, everyone dances… but no matter, as there is only one guilty party: the champagne!

The poster campaign was unveiled last spring, and so far, Hervieux is the only performer to complain publicly about it.

Étienne Dupuis, who will star in the company's staging of Dead Man Walking next March, said he has no problem with the poster for his production.

"The poster should display what the opera is about," said Dupuis. "It's not about me. It's not about Étienne Dupuis singing Dead Man Walking."

The company itself refused interviews with CBC News about the controversy, but McGill University management professor Karl Moore said the ad campaign is aimed at attracting a younger audience to the opera.

"It is a bit of a shell game, in that you convince people to get in the door, but once there, the people on stage don't look like these great models," Moore said. "But given the challenges [the company faces,] I think it makes sense."

The Opéra de Montréal has put together a new poster with a photo of Hervieux on it, and in a statement, it said attendance is up in the under-30 age group and that it will consider issuing new posters.