'I didn't come here to live this kind of life': Skilled immigrants on desperate hunt for jobs in Quebec

Instead of sparring over how many immigrants Quebec should accept, chemist Abdul Waheed wishes campaigning provincial politicians would talk about how to help skilled workers like him get jobs in their field so they could integrate into Quebec society.

As politicians spar over how many immigrants to accept, newcomers plead for help getting jobs in their field

Instead of sparring over how many immigrants Quebec should accept, Abdul Waheed wishes provincial politicians were talking about how to help skilled workers like him get jobs in their field so they could integrate into Quebec society.

Trained as a chemist and armed with two master's degrees, Waheed abandoned the chance to pursue his PhD studies in Hong Kong to immigrate to Quebec with his wife and three children five years ago.

Originally from Pakistan, Waheed was confident he'd eventually find a job in his field in Quebec — possibly in the pharmaceutical, food or petrochemical industries.

The only job he has found is at a call centre.

He's scoured countless employment sites and sent out hundreds of CVs, taking almost every job-finding program offered by Emploi Québec and studying French. Nothing has led to a better job.

"I can't express the feeling of dismay and despair I have because of this," said Waheed, 39, who lives with his family in a cramped one-bedroom apartment in Montreal's Parc-Extension neighbourhood.

He says his 11-year-old daughter asks him what's the point of all his education.

"I feel like a big failure," said Waheed. "I didn't come here to live this kind of life."

Quebec has an estimated 90,000 unfilled jobs, and municipal leaders, business and employers groups have called on the province to accept more immigrants to fill them.

But immigration has become a political hot potato in this provincial campaign, with Coalition Avenir Québec making cuts to immigration a key plank in its platform.

Both the Liberals and Québec Solidaire say they'd maintain the current quota of immigrants — about 53,000 a year.

The Parti Québécois says it would let the auditor general set the number.

The CAQ wants to slash the number of immigrants by 20 per cent, until Quebec assesses the effectiveness of its programs at retaining and integrating newcomers.

CAQ Leader François Legault says far too many immigrants don't stay in Quebec, citing Immigration Ministry statistics that show 10 years after their arrival, more than a quarter of all immigrants have left.

A more recent Institut du Québec study, released last week, puts the immigration retention rate at 81.8 per cent after 10 years, behind Ontario, British Columbia and Alberta but ahead of the Atlantic provinces, Manitoba and Saskatchewan.

The same study shows that 58 per cent of immigrants arrive without a working knowledge of French, making it difficult for them to integrate into the workforce.

Legault has seized on that point, vowing to compel recent arrivals to take a French exam and a values test within three years of arriving in Quebec — and to refuse to issue those who fail with a Quebec selection certificate, which immigrants need to apply for permanent residency.

The PQ says immigrants should have a sufficient knowledge of French and Quebec values before arriving in the province.

The political debate is unsettling for many newcomers.

"All of them are fully aware of the importance of French," says Luis Miguel Cristancho, the director of Bienvenue à NDG, a welcome centre for new immigrants and refugees in Montreal's west end.

As he speaks, two French classes are underway: one for Chinese-speaking seniors, the other for refugees, foreign students and temporary workers who hope to stay in Quebec.

Unfortunately, Cristancho says, some are forced to quit French classes because they have to get jobs to support their families.

He believes the government has to find more ways to offer French-language training beyond the classroom.

"You need to make French accessible in every single corner," said Cristancho.

"Learning a language is about living a language. It's about learning French in your workplace, at school, everywhere." 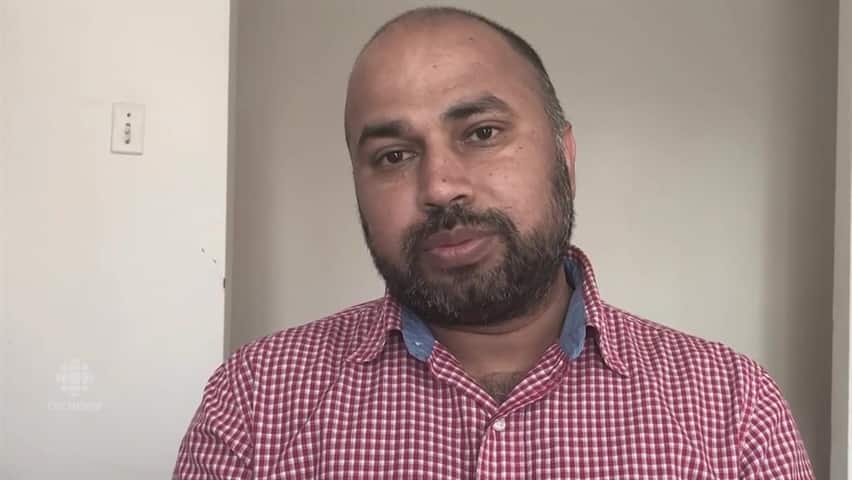 2 years ago
1:58
The Pakistani chemist came to Montreal with his wife and three children five years ago, but despite having two master's degrees, he can only find work in a call centre. 1:58

Prof. Marie-Therese Chicha, an economist at the University of Montreal's school of industrial relations, agrees, describing Quebec's efforts as "fragmented" and "underfunded."

This year alone, Chicha says, Quebec received nearly half a billion dollars in transfer payments for programs such as PRIIME, a provincial subsidy for employers who hire new immigrants, to offset training and integration costs.

"That's small compared to the number of immigrants who arrive in Quebec and are highly skilled," said Chicha.

The CAQ has pointed out that the unemployment rate is 15.8 per cent among immigrants who have been here for five years or less — nearly 10 points higher than the general population.

However, Chicha points out one of the highest levels of unemployment is among North African immigrants from Algeria, Tunisia and Morocco, who all speak French fluently.

"There are other obstacles," she said — namely, discrimination.

Sherbrooke resident Aida Chebbi fears that is what is behind her husband's struggle to find a job.

Chebbi and her husband, Reffaat Bouzid, immigrated to Quebec from Tunisia with their two young children in 2013.

"Our whole project to come here was based on my husband being able to work as an architect," said Chebbi.

Bouzid earned his degree in France and has more than 30 years' international experience, designing everything from houses to hotels.

But once here, it took three years to have his credentials recognized.

He finally got his permit to practise in June 2017 but still can't land a job.

"Without a doubt, our origins are behind this refusal," said Chebbi.

The family has had to borrow money to make ends meet, and Bouzid has taken small jobs as a cleaner. Recently, he's had health problems which Chebbi blames on stress.

Chebbi is wrapping up a master's degree in biomechanical engineering and will soon be looking for a job herself, but she's bracing herself for disappointment.

"We moved here to have a better life, and that starts with jobs."

Chicha says Quebec's labour shortage means the province can't afford to reduce the number of immigrants, and those who frame immigration as a threat are using it as "an excuse not to act."

She says if the next government wants to avoid more immigrants giving up on Quebec, it has to admit systemic discrimination exists.

One tangible way of tackling it, she said, is by expanding employment equity programs.

All employers should be required, by law, to hire a certain percentage of skilled visible minorities, Chicha said.

That would strengthen their social and professional networks and help them integrate, said Chicha.

Right now, Chicha says, the blame too often falls on immigrants if they have trouble learning French or finding a job in their field.

"In fact, it's other actors who have a large responsibility — employers and the government," said Chicha.

"It's this society that really needs to open up to these newcomers," he said. He'd like to see more awareness programs about the benefits of hiring immigrants.

'I want them to be proud of me'

Abdul Waheed just wants the chance to prove what he can do as a chemist.

In 2016, seeing no other option, he headed back to school.

He'll soon graduate with a diploma in laboratory technology and analytical chemistry from Dawson College.

Waheed hopes a CEGEP certificate plus the connections he's made there are enough to finally get him a job in his field.

"If not, I'll be left with no other option but to relocate," said Waheed, although he fervently hopes to stay in Quebec, where his family is now settled.

His daughter and son chatter away in French effortlessly now. Arriving home from school, his daughter shows off an award she got that day.

"Of course, I am proud of my kids," said Waheed.

Want the latest from the campaign trail? Sign up for CBC Montreal's election newsletter at cbc.ca/ballotbrief