Are you there, God? It's me, François Legault

On the second day of hearings into Quebec's controversial secularism bill, Premier François Legault mused about the existence of God.

At hearings into Quebec's secularism bill, politicians asked to reflect on one of life's biggest questions

"I hope there is a God, otherwise I think that if not, life would be unfair to those who live in misery, who die young," he said Wednesday, adding that he was baptized Catholic but is non-practising.

"I hope that God exists, but I do not have confirmation."

The premier made the pronouncement in response to a reporter's question before the second day of hearings into Quebec's contentious secularism legislation, Bill 21.

Legault said there are "two competing theories" — that God exists or that everything is random, but it's an "incredible" kind of randomness that includes the Big Bang and the origins of life.

Other politicians were asked for their own thoughts on God, given the heated debate around whether some public servants should be banned from wearing religious symbols.

If made law, Bill 21 would prohibit workers in positions of authority, including public teachers, from wearing a kippa, hijab or turban.

Sol Zanetti, a Québec Solidaire MNA, said he doesn't believe in God, but that the question wasn't relevant to the debate.

"We are in a secular state, and people know that politicians don't take their decisions based on religious values. The Quebec political system is already secular, so we don't need to go further."

He said the Charter of Rights and Freedoms protects individual rights by enshrining "the freedom to believe and the freedom not to believe."

For their part, Liberal MNA Hélène David and PQ Leader Pascal Bérubé refused to weigh in on the existence of a supreme being.

François Legault offers his thoughts on the existence of God 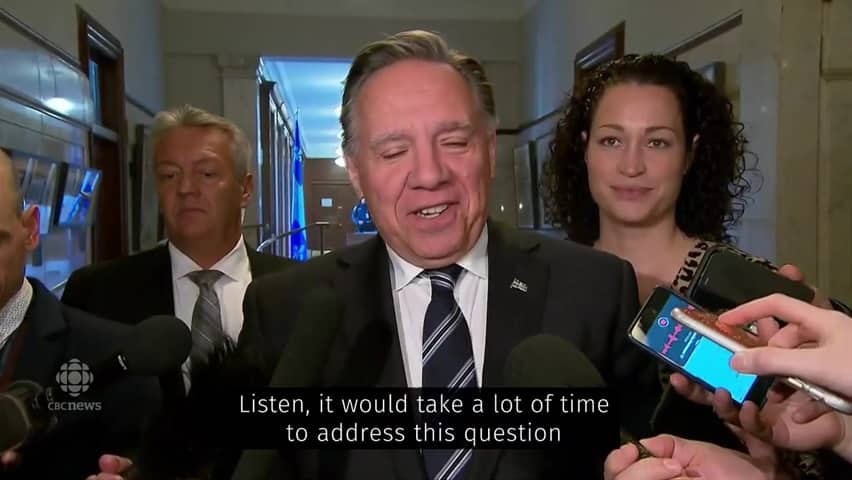 'Do you believe in God, Mr. Legault?'

1 year ago
0:25
Quebec Premier François Legault was asked about his faith in God Wednesday as hearings on his government's secularism bill continue. 0:25

With files from Cathy Senay