They were stuck in a Quebec City parking garage for four hours Sunday, but when they emerged, members of La Meute said they had succeeded in making their point.

'We made our point,' representative for La Meute says following tumultuous day in provincial capital

They spent more than four hours penned in a sweltering Quebec City parking garage as counter-demonstrators clashed with police two storeys above, but when the supporters of a far-right group finally emerged Sunday afternoon, they declared victory over critics who had dismissed them as extremists.

An ashen-faced anti-racism activist looked on in disbelief while members of La Meute marched silently in front of the National Assembly — the capital's streets calm again under heavy police presence.

Maxime Fiset, himself a former member of a far-right group, said the day's events had set "back the cause of tolerance a couple of years." He blasted what he described as a fringe element for hijacking a counter-demonstration organized to offset La Meute's anti-immigration rally.

The counter-demonstration began peacefully, but was declared illegal by police when black-clad protestors jostled with authorities and threw projectiles at La Meute members.

"I'm mad at such a display of violence because it was useless," said Fiset, who now works for the province's anti-radicalization centre. "It's a public relations victory for La Meute."

La Meute's leaders, on the other hand, were triumphant, claiming the group showed discipline when faced with provocation.

"We made our point. I really believe this day will be the day La Meute gets out peacefully, just to the show the people what we really are," said Patrick Beaudry, one of the group's founders.

The group's short march ended with chants of "We are La Meute" and "Long live La Meute."

A rally against 'illegal immigration'

La Meute — or Wolf Pack — has until recently existed mostly online, where thousands exchange messages on a secret Facebook group.

Increasingly, though, the group — which believes Quebec culture and society are currently threatened by radical Islam — has been making its presence known at real-world protests.

It organized Sunday's demonstration in response to the sudden spike in asylum seekers crossing the Quebec border illegally from the U.S.

"We think the RCMP should be upholding the law, not carrying the suitcases of illegal immigrants," Sylvain Brouillette, the group's chief spokesperson, said earlier on Sunday.

The group was meant to meet in an underground parking garage behind the National Assembly at 1 p.m. ET before embarking on their march. But as members arrived, counter-demonstrators — some affiliated with the so-called antifa, or anti-fascist, movement — moved to block entrances.

One woman wearing a La Meute tank top was doused with water and called a "Nazi" by masked counter-demonstrators as she tried to enter.

Around 200 La Meute supporters, including elderly people and young children, had assembled underground when the counter-demonstration turned violent.

Quebec City police told the group's leaders they could not guarantee their safety, and counseled staying inside until order was restored.

In the noxious heat of the parking lot, several La Meute supporters required medical attention. Authorities eventually provided water bottles and let them access washrooms in the convention centre above.

Many who spoke with CBC News said their support for the group's cause was undeterred by the uncomfortable start to the protest.

"I liked the experience," said Claude Gagné, who drove from Joliette, Que., Sunday morning. "It was motivating. Quebecers stand up for themselves. That's what I learned today."

Outside, many counter-demonstrators also made long drives from around the province to publicly condemn La Meute's positions.

Titas Banerjee said he was compelled to make the drive from Montreal to attend after the disturbing events last week in Charlottesville, Va.

"It's a show of solidarity and, more importantly, to make sure groups like La Meute and other offshoots know there is opposition and they don't actually grow into groups that later form into electoral politics," he said.

At least two members of La Meute acknowledged taking part in the Charlottesville demonstration, though the group has distanced itself from last weekend's events. One of them, Shawn Beauvais-MacDonald, also attended the Quebec City demonstration.

As the violence played out on Sunday, the premier took to Twitter to denounce "violence and intimidation."

Prime Minister Justin Trudeau, in Montreal for the Pride Parade on Sunday, also condemned the Quebec City demonstration, organized by what he described as a "small minority of racists."

"We all know that Canadians and Quebecers are not represented by that minority," he said. "We're open, respectful and compassionate people."

The violence that marred Sunday's counter-protest stands in stark contrast to demonstrations held a day earlier in Vancouver and Boston. In both instances, planned rallies by the far-right were vastly outnumbered by peaceful anti-racism demonstrations.

"Today they proved to be more mature," Fiset, the anti-racism activist, said of La Meute. But he also encouraged allies of the anti-racism movement to "keep up the good fight."

"As long as nobody gets hurt and there is no violence, it's completely legit that you counterprotest events such as this one, because there is no way we can stand for racism and intolerance in Canada." 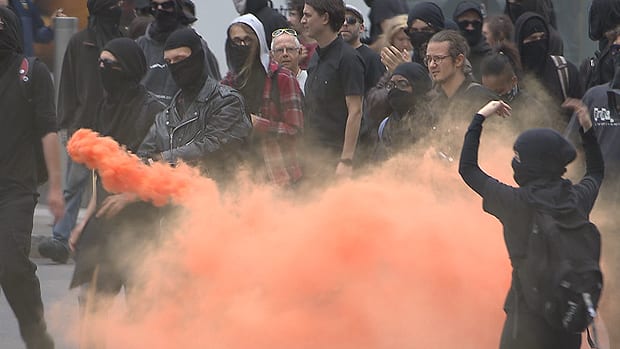 4 years ago
3:01
Far-right groups, including La Meute, planned an anti-immigration demonstration in Quebec City but anti-racism counter-protesters blocked their efforts. 3:01

With files from Claude Rivest