Amid criticism, Quebec explains rules of its face-covering ban

Quebec Justice Minister Stéphanie Vallée sought to clarify the province's controversial face-covering ban on Tuesday, saying the law will only apply when it's required for communication, identification or security reasons.

Quebec Justice Minister Stéphanie Vallée sought to clarify the province's controversial face-covering ban on Tuesday, saying the law will only apply when it's required for communication, identification or security reasons.

At a news conference that lasted more than an hour, Vallée explained how the new law will be implemented in specific cases. She said the law, which pertains to those giving or receiving public services, is not meant to be repressive.

"I'm sorry that it wasn't as clear," she said. "Maybe what I'm doing today I should have done the day after we adopted the bill."

Bill 62 has been the subject of questions and confusion since it became law last Wednesday in Quebec's National Assembly.

Civil rights advocates have accused the province of targeting Muslim women who wear a niqab or burka, while municipal politicians have said it's unfair to ask public servants, such as bus drivers or library workers, to enforce the law.

Vallée said Tuesday a Muslim woman wearing a niqab or burka would only be required to uncover her face to take public transit if a photo ID is required, as in the case of those paying a reduced student fare.

The same rules would apply to someone wearing sunglasses and a scarf, she said.

As well, an individual would not be required to uncover the face for the duration of the ride on a bus or Metro, she said, in a departure from what she had previously told CBC News.

At public libraries, a person with a covered face is free to roam the stacks but would be required to uncover their face to communicate with staff, Vallée said.

At a hospital, a person requiring emergency care wouldn't be turned away because of a face covering, she said. 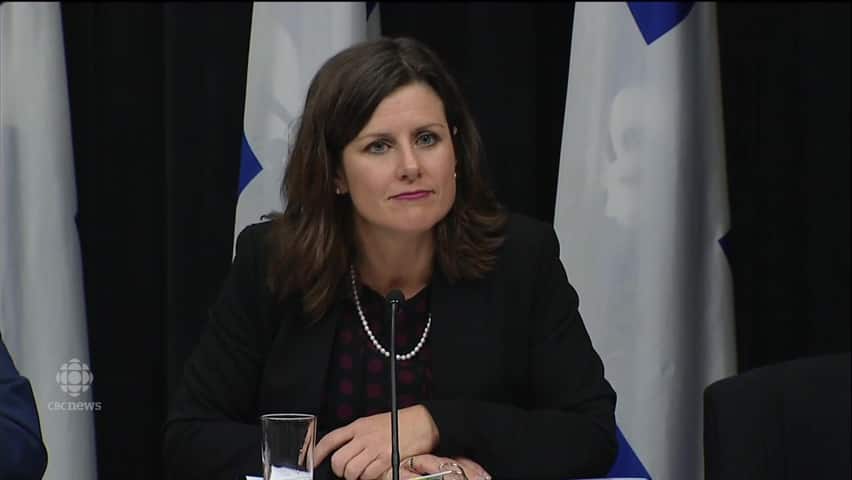 3 years ago
1:00
Quebec Justice Minister Stéphanie Vallée explained how the province's new face-covering law will be implemented in specific cases. 1:00

Vallée said the law is in effect and applies across the province. But she also said a Muslim woman wearing a niqab or burka would be eligible for an exemption to the law on religious grounds.

There are no sanctions listed in the legislation for those who don't comply.

After the news conference, they pounced on Vallee, with the CAQ's Nathalie Roy calling the justice minister's change of tune "a mess" and a "comedy act."

She said Vallée had said during hours of committee hearings on the bill that the ban would apply throughout the time of service, and now she's backtracking because of the backlash.

The PQ's Jean-François Lisée said he's "ashamed" of a government that's unable to stand up and defend its laws.

The left-leaning Québec Solidaire also voted against the law, calling it "absurd and impossible to apply," and arguing it's incoherent to legislate on the clothing a tiny religious minority wears while a crucifix hangs in the National Assembly.

A motion to debate that issue was shot down by the Liberals on Tuesday.

The guidelines were originally set to be released by next July, after a round of consultations. But that timeline was moved to Tuesday in attempt to quell uproar over the law.

The law has been criticized by the premiers of Ontario and Alberta, Montreal Mayor Denis Coderre, and citizens, who have held protests to show their opposition.

Prime Minister Justin Trudeau has said governments shouldn't tell women what they can and cannot wear.

But there is support in Quebec for what the law is trying to achieve.

According to an Angus Reid poll published before Bill 62 became law, 87 per cent of Quebecers agree with its objectives.

The law, Vallée argued, represents a "well-balanced response" to a debate over the reasonable accommodation of minorites that has been ongoing in the province over the past 10 years.

She said Quebec is blazing a trail on the question of religious neutrality, as it did when it became the first province to pass doctor-assisted dying legislation.

With files from Angelica Montgomery