Quebec voters are called to the polls on September 4 after a short summer election campaign. 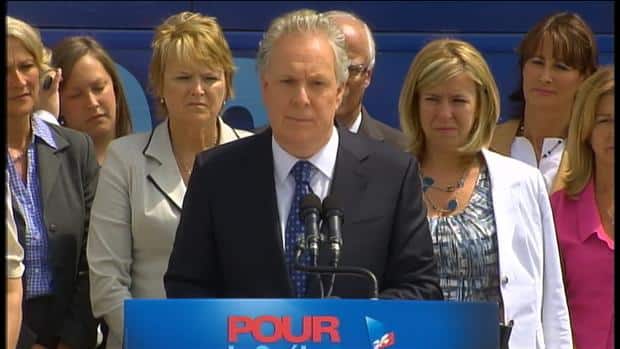 Quebec Premier Jean Charest urged the province's "silent majority" to express their political will as he called an election for Sept. 4.

Charest met with Quebec Lt.-Gov. Pierre Duchesne Wednesday morning, and asked him to dissolve the national assembly following months of election rumours in the province.

Charest is taking a political risk calling a summer election campaign on the heels of an emotional and divisive student tuition protests that shook the province in the spring.

Flanked by Liberal candidates and a campaign bus splashed with the party's slogan, "For Quebec", Charest addressed the tuition debate immediately.

His government was open and transparent throughout the crisis, he said, and worked with student leaders to resolve the conflict.

He condemned violent protests that flared up during the months-long conflict, and led to his government's controversial emergency law Bill 78 — a temporary law widely criticized that set out new limits on public demonstrations.

"It's not the Quebec we want. It's certainly not the Quebec that we love. Quebec is a land of freedom, of respect for democracy, respect for its institutions, and Quebecers have the right to live in a place where we respect," Charest said.

If voters re-elect a Liberal government, the "silent majority" will have spoken, Charest said — not only those who were "hitting away at pots and pans" during the spring casserole protests.

"My path has not been perfect, but it shows a desire to help Quebec progress and improve the lives of Quebecers."

With election buzz in the air, Parti Québécois Leader Pauline Marois held a press conference this morning to introduce the party that will be seeking the top seat in any upcoming vote.

Marois said her party chose "teamwork" as a leading pillar for her electoral campaign.

"Charest decided not to help Quebec, [François] Legault let go of his convictions and walks in the current premier's footsteps," she said.

"We prefer that Quebec be a normal country. We choose freedom," she said. "In the coming weeks, it will be our turn to choose. It is not Canada's duty to pick our government for us, it's our turn to decide by voting."

Marois said she plans on talking about sovereignty every day during the campaign.

Quebec has spun its wheels for years with its sovereignty-federalist fight, to the province's detriment, said Legault, a former PQ cabinet minister.

The CAQ wants a 10-year freeze on any separation talk — to govern by focusing on economic growth and education.

Quebecers are ready for change, and "need a manager to clean up corruption, clean up bureaucracy, eliminate waste," Legault said.

Along with the CAQ, nascent political party Québec Solidaire hopes to challenge the province's two main parties by delivering change.

Amir Khadir – Québec Solidaire's only elected MNA, and party co-leader – is one of the highest profile politicians in the province, and an outspoken critic of the Liberal government's handling of the student crisis.

At a news conference Wednesday, party co-leader Françoise David went on the offensive against Charest's Liberals, saying the province deserves better than what it's seen from the majority government.

"Quebec is a rebel," said David. "It refuses the domination of economic and financial centres. It believes that by hitting on casseroles and tam tams that the best is to come and that we can build it. Together, in French, standing, proud and firm."

Option Nationale, a new party started by former PQ MNA Jean-Martin Aussant, will also make its debut on the next provincial ballot.

Leaders representing the province's college and university federations also addressed the media this morning to announce their new campaign aimed at ensuring the current government isn't elected for another mandate.

Martine Desjardins of the FEUQ and Éliane Laberge of the FECQ said their organizations will announce their official plans for the campaign Sunday.

They are insisting the movement is non-partisan, but will target 25 ridings where Liberals won a large majority in the 2008 election.

Desjardins said the objective is to "make sure everyone, not only the students, but also citizens remember what the government did in the last eight years of their mandate."

"It's been a long time that they've been in place of the government and we think we [are] ready for the change. We think the youth and the citizen can make the difference."