The Quebec government is taking steps to protect the province's forestry industry after the Trump administration announced it will impose tariffs upward of 20 per cent on Canadian softwood lumber imports.

Province promises guaranteed loans to industry that accounts for 60,000 jobs in Quebec

The Quebec government is taking steps to protect the province's forestry industry after the Trump administration announced it will impose tariffs upward of 20 per cent on Canadian softwood lumber imports.

Calling the new U.S. duties "unjustifiable" and "unreasonable," Anglade said the government would provide the 178 Quebec companies affected by the move with financial support in the form of guaranteed loans.

"This financial support will provide oxygen for these companies and help them overcome a lack of liquid assets in the coming months," she said. The loans will be market value and conform with existing trade agreements.

Anglade said around 30 companies have already called about the program since the Trump administration's announcement yesterday.

Roughly 90 per cent of the province's lumber exports head to the U.S. and the forestry sector accounts for 60,000 jobs in Quebec.

"To those employees, our government is with them and their families," Anglade said.

Anglade said Quebec will continue negotiating with the U.S. government, noting that the province has won every litigation battle since 1982.

"The [Trump administration] is looking for successes right now, and I believe a good deal on softwood lumber between the U.S. and Canada would be very profitable," Chrétien said.

"Mr. Trump is a dealmaker. [U.S. Commerce Secretary Wilbur] Ross is a dealmaker, and I believe a deal may be possible in the coming months."

Canadian lumber imports are expected to face new duties ranging from three to 24 per cent starting next week, after a U.S. Commerce Department investigation released Monday once again concluded that softwood lumber imports are unfairly subsidized.

Quebec-based Resolute Forest Products, one of four Canadian companies mentioned in the investigation, will be subject to a 12.82 per cent tariff at the border.

Seth Kursman, a vice-president of the company, told CBC Montreal's Daybreak that the company is disappointed and that "tariffs are never a good thing."

He said company should have unencumbered access to the U.S. market.

The U.S. lumber industry has argued for decades that because most Canadian timber is harvested on Crown lands, the way provincial governments manage and set prices for these harvests results in cheaper lumber.

"Today's ruling confirms that Canadian lumber mills are subsidized by their government and benefit from timber pricing policies and other subsidies which harm U.S. manufacturers and workers," Cameron Krauss, the legal chair of the U.S. Lumber Coalition and a senior vice-president of Oregon's Seneca Sawmill, said in a release on Monday.

​In a joint statement, Natural Resources Minister Jim Carr and Foreign Affairs Minister Chrystia Freeland said the "government of Canada disagrees strongly with the U.S. Department of Commerce's decision to impose an unfair and punitive duty."

The tariffs announced Monday are preliminary. A final determination based on further study will be made later, likely in January 2018. 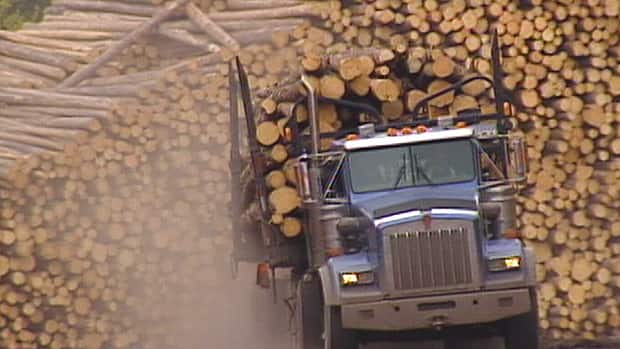 3 years ago
4:29
Tens of thousands of Canadian jobs are under threat, government ministers call countervailing duties 'baseless and unfounded' 4:29

with files from Janyce McGregor